The author is an extension farm advisor with the University of California based in Blythe. 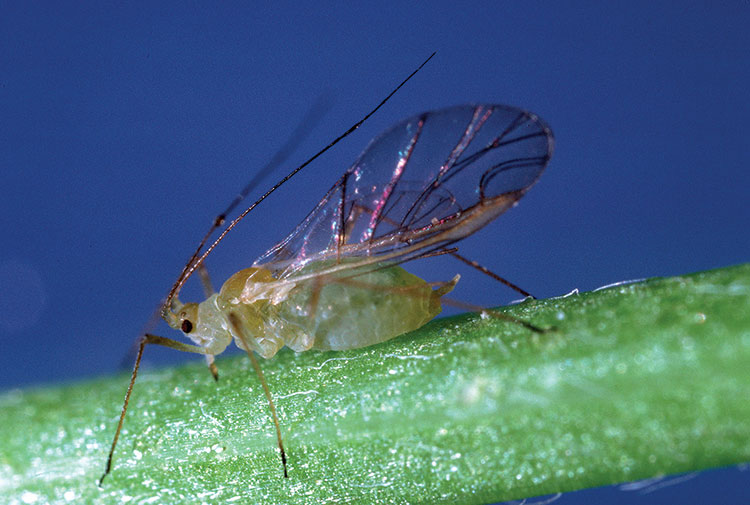 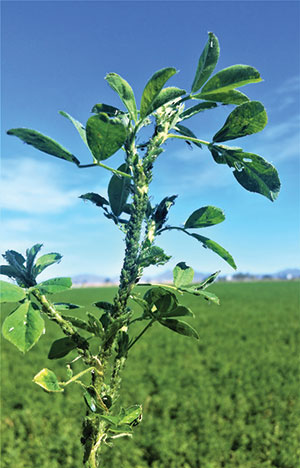 Blue alfalfa aphids completely colonized stems of some fields in 2018.
Suzanne Tippet
The blue alfalfa aphid is again present in many southwestern U.S. alfalfa fields. Growers and pest control advisers were hoping that 2019 would be a break from the annual battles they have been fighting with this pest since 2013, but populations high enough to necessitate some initial treatments have already been observed this year.

The blue alfalfa aphid (Acyrthosipon kondoi) is a native of Southeast Asia, and wasn’t noted in the United States until 1974 when it was identified in samples from Kern County, California. It gets its name from its blue-green color, and is called the bluegreen aphid in other countries such as Australia.

Damage to California alfalfa by the blue alfalfa aphid was reported in 1975. It has been present in southwestern U.S. alfalfa fields each subsequent year. This aphid species is more damaging to alfalfa than the larger and closely related pea aphid (Acyrthosiphon pisum) due to a toxin associated with blue alfalfa aphid feeding. The toxin results in stunted plants and reductions in plant growth and yields.

In 1977, the alfalfa variety CUF-101 was released. This was a collaborative work between commercial alfalfa breeders, university personnel, and individual farmers. This variety was considered to have high resistance to blue alfalfa aphid, as approximately 60 percent of plants survived infestations in greenhouse studies. Resistance is expressed better and more effectively with higher temperatures.

The variety became the standard for blue alfalfa aphid resistance and was widely planted in the desert southwest for many years. Aphids were controlled through the use of highly resistant varieties and the naturally occurring predaceous insects such as parasitic wasps and lady beetles. Insecticide treatments were highly effective when outbreaks did occur.

Blue alfalfa aphid dynamics changed in 2013 as large outbreaks of aphids were present and damaged area alfalfa fields. Control by insecticides was not considered effective as in previous years, with many fields being treated multiple times in the same cutting. This has occurred in subsequent years as well, including 2018.

The change in treatment effectiveness has not only been true in the low desert but also is occurring in other U.S. areas. Extension colleagues in Utah have noted severe damage to alfalfa coming out of dormancy in late spring, with calculated losses of $6 million per year in some counties. Pest control advisers, growers, and others have questioned why these outbreaks occurred and continue to
be experienced.

The blue alfalfa aphid migrates into low-desert alfalfa each year. It is not found in low-desert alfalfa fields during the summer and fall, as the high temperatures in these locations are lethal to the aphid, and it doesn’t survive freezing conditions either. Aphids must reinfest area fields each winter by flying into the area on southerly winds. Upon landing, the aphids give daily birth to more aphids.

Weather patterns may be one factor in the outbreaks. While rainfall can definitely reduce aphid numbers, it was not experienced during 2017 to 2018. Temperatures during that winter were above average, with many growers cutting fields in both January and February. Lady beetles, primarily the convergent lady beetle and to a lesser extent the seven-spotted lady beetle and a few other species, were locally very abundant. Finding blue alfalfa aphids in local alfalfa fields during late January 2018 was difficult due to ladybird beetles feeding on the aphids.

In mid-February, the high temperatures were near or reached 90°F for several consecutive days. This resulted in the vast majority of convergent lady beetles leaving the area and few beetles remaining in fields.

In late February and early March, blue alfalfa aphid populations exploded in University of California Cooperative Extension insecticide trial plots, with the majority being winged aphids. This indicated that the aphids were migrating into local fields on winds from other areas. Alfalfa plots that were light green to yellowish in coloration were most attractive to the migrating aphids.

Aphids almost completely colonized alfalfa stems. Alfalfa nearing harvest was sticky with aphid-produced honeydew. In these situations, yield losses were about 0.25 tons per acre where aphids were not controlled.

Parasitic wasps were not active against blue alfalfa aphid in 2018. The most effective wasp for biocontrol of blue alfalfa aphid is Aphidius ervi, which also attacks the pea aphid. This wasp species does not attack other aphids in the area and needs to be re-established on an annual basis. The process relies entirely upon the migration of recently parasitized blue alfalfa aphids or pea aphids. These would be aphids that are still able to fly and migrate prior to their death due to wasp feeding.

While weather patterns can contribute to outbreaks of blue alfalfa aphid, there are other factors that are of greater concern. Differing biotypes of the blue alfalfa aphid have been documented over the years. In 1990, the first new blue alfalfa aphid biotype was found in Oklahoma and was designated as BAOK90. This aphid was noted to have overcome some host plant resistance conferred by CUF-101.

In 1998, a number of differing blue alfalfa aphid populations were documented. They differed in their life history traits such as survival, reproduction, growth rates, and percentage of winged aphids. Subsequent Australian research found variation in growth rates. In 2009, blue alfalfa aphids in Australia were collected that had much greater virulence on all previously resistant varieties and produced high rates of plant mortality. Confirmation of a new, highly virulent blue alfalfa aphid biotype was later confirmed, along with an expansion of its range.

As aphids can spread worldwide via wind currents, it is not unreasonable to suspect that U.S. alfalfa producers are now encountering the blue alfalfa aphid noted in Australia in light of the higher populations and damage being found in alfalfa fields. Testing to confirm that this blue alfalfa aphid biotype is present in the U.S. is necessary, with the results being of high interest. 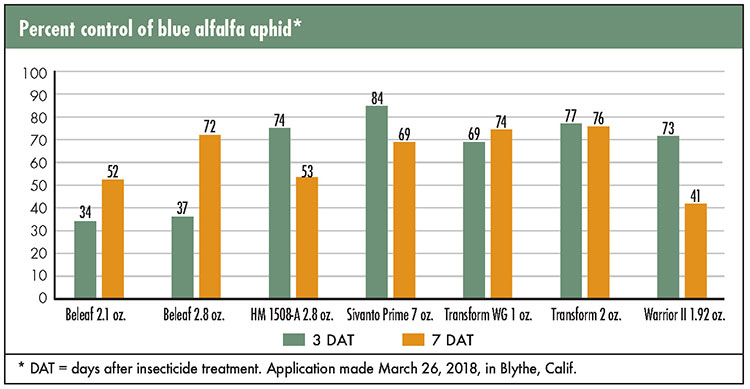 Insecticide data from local 2018 trials has shown that the blue alfalfa aphids encountered locally are much more difficult to control than a decade ago, when many insecticide treatments resulted in 95 percent or greater control. Insecticides continue to provide acceptable control of pea aphids; however, the best blue alfalfa aphid control at seven days post treatment was usually only about 75 percent (see graph). This was noted from existing as well as potential new alfalfa insecticides for the alfalfa market.