Alfalfa may be more salt tolerant than we thought

By Sharon Benes, Dan Putnam
Benes is a professor and soil scientist at California State University-Fresno. Putnam is an extension forage agronomist with the University of California-Davis. 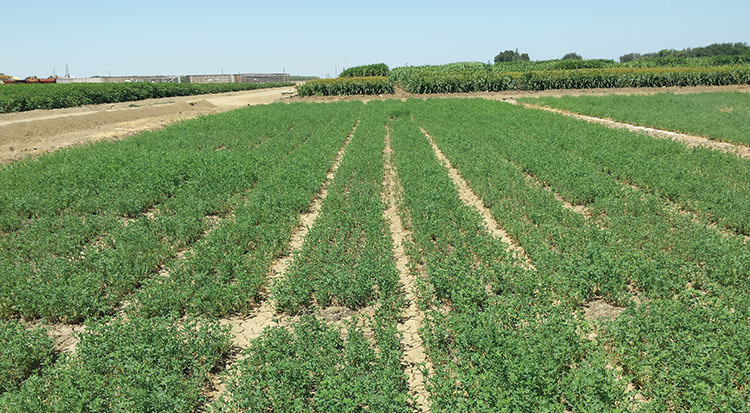 Along with reduced irrigation water supplies, soil salinity is a major problem facing irrigated agriculture in the western United States, particularly as we confront a warming climate. As water supplies become scarcer, there is a greater need to utilize alternative waters for irrigation and many of these are saline.

Forages are a good choice for irrigation with saline water because there are high levels of salt tolerance in some grass forages and cutting removes foliage, preventing continual accumulation of toxic ions such as sodium. Although often considered less tolerant than tall wheatgrass and bermudagrass, alfalfa is now being recognized as a more salt tolerant forage than previously perceived.

Alfalfa has historically been classified as moderately sensitive to salinity with yield declines predicted at greater than 2 dS per m ECe (deciSiemens per meter, electrical conductivity of the saturated soil paste extract). However, greenhouse and field studies over the past five years have confirmed that alfalfa can be grown with limited negative effects at much greater salinity levels. Studies in sand tanks at the USDA Salinity Lab in Riverside, Calif., led the authors to believe that irrigation with saline waters resulting in soil salinities of less than 6 dS per m ECe would result in relatively little yield loss for the varieties tested.

In a greenhouse study, we compared the response of established plants of 20 alfalfa cultivars, under irrigation with waters of 5, 10, and 15 dS per m ECw (electrical conductivity of water). To simulate field conditions, temperatures were kept relatively warm, the potting medium consisted of 50 percent clay loam soil, and the irrigation schedule of once per day allowed for some drying of the soil between irrigations.

All cultivars maintained a 95 percent yield level or higher (compared to nonsaline conditions) under irrigation with the 5 dS per m water (Figure 1). This resulted in a final soil salinity of 8.5 dS per m ECe, well above the established threshold for yield reduction of 2 dS per m ECe. 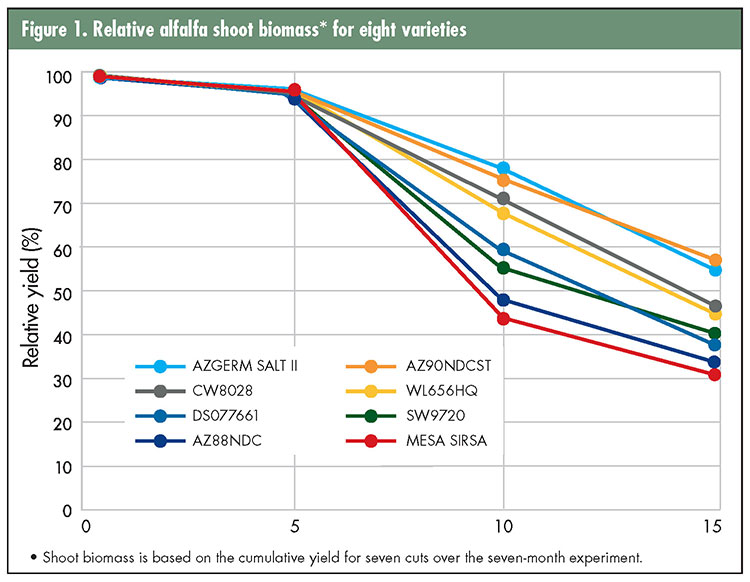 Going to the field 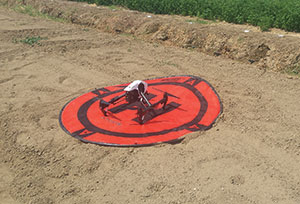 In Trial 3, using subsurface irrigation, drones were used for multispectral imaging of stand health.
Results from our field trials also indicated a higher degree of salt tolerance for alfalfa than current guidelines suggest. In one study, a three-year variety trial on clay loam soil near Five Points, Calif., using irrigation water of 5 to 7 dS per m ECw and final soil salinities near 9 dS per m ECe, indicated normal yields and excellent stand survivability.

For a second trial, 21 varieties of alfalfa (experimental and commercial) were planted into a presalinized, clay loam soil (about 4 dS per m ECe) and challenged with higher salinity water (7 to 10 dS per m ECw) that resulted in soil salinities of 10 to 16.5 dS per m ECe (0 to 3 foot depth) in the high-salinity basin at the end of the first year and throughout the second and third year. The low-salinity basin received water averaging 1.24 dS per m and soil salinities were 3.2 to 4.6 dS per m ECe.

Averaging across varieties, yield reductions were only 9 to 13 percent, although three of the 21 varieties lost more than 20 percent yield under these highly saline-sodic soil conditions (Table 1). CUF101, a variety planted in the San Joaquin Valley for many years but not bred for salt tolerance, also showed only a 12.6 percent yield loss over the three-year trial.

Trial 2 provided valuable information on the overall salt tolerance of alfalfa, but we were unable to rank the varieties for salt tolerance due to the lack of uniform salinity and soil moisture within the basins. In spite of the four replicated plots for each variety and the use of 1-meter borders, a significant border effect was observed. Adjustments were made to improve the distribution uniformity of the basin irrigation and to deepen water penetration. But care had to be taken to avoid waterlogging due to the sensitivity of alfalfa to poorly aerated soils and irrigation had to cease 10 to 12 days before harvesting.

It was expected that the saline-sodic water used for irrigation in the high-salinity basin would lead to clay dispersion and reduced infiltration, but at times infiltration was poor in the low-salinity basin as well, due in part to the expanding clay loam soil that swells upon wetting and small differences in elevation that created spatial variability in water infiltration and salt distribution.

A third field trial was established in spring 2017, utilizing subsurface drip irrigation to apply saline water more frequently and at a lower volume. As a result, there was less wetting of the soil surface to minimize the dry-down period and water stress prior to cutting. Sprinkler irrigation is being used once or twice per year for leaching. This trial is underway, and results are not currently available.

How saline will the soil become?

This is what growers would typically ask if faced with using saline irrigation water; unfortunately, there is not a simple answer. It is important to know because the established crop yield loss thresholds are based on soil salinity (ECe). Under most field conditions, the soil will become more saline than the irrigation water and the extent of salinization depends on the salinity of the irrigation water, soil texture, leaching fraction, and the type of leaching. A higher salinity water will lead to more soil salinity, but soil texture has a large influence.

Fine-textured soils with a higher clay fraction will have greater capillary rise of water to the soil surface and surface salinization as fresh water evaporates and salts remain behind. Coarse-textured (sandy) soils may show little change in soil salinity and, if water application is heavy, they could even show a decline if native salts are leached deeper in the profile by the irrigation.

How much water do I have to apply for leaching?

Leaching is the application of extra water to take the soil beyond field capacity and physically move salts downward in the profile. Leaching is necessary to minimize the rise in soil salinity. Applying a small amount of extra water (perhaps 5 to 10 percent beyond the crop water requirement) at each irrigation is called maintenance leaching. It is based on a steady state equation used to calculate the leaching requirement (LR) as follows:

The leaching requirement is aimed at maintaining the soil salinity below the threshold value for yield loss. This is inherently a conservative approach for two reasons: (1) The yield loss threshold value used in the LR calculation (for the value of ECe) may itself be conservative, especially if newer, more salt-tolerant varieties of a crop are available, and (2) If salinity reduces a crop’s biomass production and therefore its evapotranspiration (ET), then just applying the crop water requirement should result in some leaching of the profile.

The problem is that in the absence of direct measurements, it is difficult to know if the salt stress is great enough to reduce the crop ET and thereby provide some leaching without additional water application. New decision support tools, including computer models, are being developed that utilize site-specific data (soil texture, irrigation water salinity and volume, crop planting, and harvest dates) to calculate in-season leaching requirements, rather than utilizing the equation above with a static value for soil salinity (ECe), which does not change throughout the season. This is not the situation in saline-irrigated soils.

Reclamation leaching (periodic heavy irrigation to move salts below the root zone) is another approach, but is less conservative because it does allow salinity to build in the profile. If irrigation water is in short supply and/or there is a concern for leaching nitrate while in the process of leaching salts, then reclamation leaching can be timed to periods of low nitrogen in the soil profile. In the case of extended irrigation with saline-sodic waters and impaired infiltration, it can be difficult to achieve deep percolation and move salts below the root zone.

Always consider the long-term impact of saline irrigation on soil quality, including the volume of irrigation water required to return the soil salinity to levels suitable for most other crops — ideally, below 5 dS per m ECe. Therefore, utilize less saline irrigation when future rotations include more salt-sensitive crops.

Soil texture and infiltration characteristics largely determine the extent to which salts can be leached from saline-irrigated fields, and some soils are not easily leached due to their saline-sodic condition or subsurface impediments. When waters are affected by sodicity (high sodium with respect to calcium), the tendency for sodium to disperse clay particles and break down the soil structure poses significant challenges. Careful water management during stand establishment, prevention of crusting, and agronomic practices to promote water infiltration and prevent ponding will be particularly important to the successful production of alfalfa under these conditions.

Typically, soil amendments such as gypsum are needed to supply calcium and reduce exchangeable sodium. Should free lime be present in the soil, soil sulfur can be used instead, both to reduce soil pH and solubilize native calcium in the soil. Use of these amendments is essential, but it also boosts production costs. Likewise, when saline waters are also high in boron, be attentive to boron accumulation in the soil given that it is not easily leached.

Lastly, most of this discussion has been for situations where the saline irrigation began with a nonsaline profile. If starting with a saline soil, a greater impact on the crop might occur than if using the same saline water source on a nonsaline soil. Soil and irrigation water testing on a regular basis is recommended to monitor salt build up in the soil profile and to determine whether the saline water source is saline-sodic, in which case degradation of soil structure is a concern, and/or if the saline source is high in boron, in which case leaching would require larger water volumes.

Nevertheless, given the high level of salt tolerance suggested by our field and greenhouse studies, irrigation with moderately saline waters (4 to 8 dS per m) appears to be feasible for alfalfa if appropriate practices are used.

This article appeared in the August/September 2019 issue of Hay & Forage Grower on pages 6 to 8.

Yield trends for the King and Queen of forages Next