With tight margins in the dairy industry, we sometimes look to reduce feed costs as a method to improve margins. Since feed cost is 50% or more of the total cost of milk production, it is often a primary target. However, in most cases, higher quality forage is one of the most valuable things we can add to the ration to widen feed margins.

If the dairy has the cow comfort, cow health, and management to realize a higher level of production by feeding a higher quality forage, then the feed cost per hundredweight (cwt.) of milk produced will decline, resulting in a more favorable margin.

No substitute for quality

One common misconception is that if hay quality is poor, one can simply feed more concentrate and compensate for the lower quality forage. A published research study determined the impact of alfalfa hay quality on milk yield. Some of the results of this study appear in Table 1. 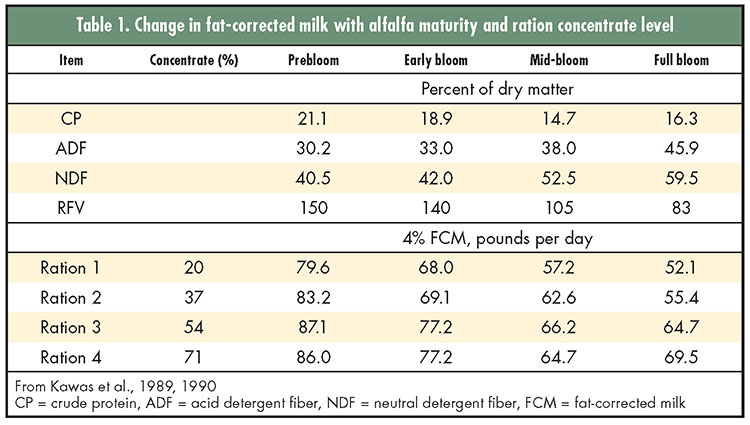 This study only utilized hay as the forage source. In most cases, other forages will be included in a dairy ration so that the total reduction in milk yield by feeding a lower quality alfalfa may not be as great as realized in this study. However, even slight decreases in milk production may result in significant changes in milk margin.

If a dairy is feeding 8 pounds of alfalfa per cow each day, for example, then a ton would feed 250 cows. If the higher quality hay is worth a $40 premium in the market, then the daily feed cost per cow is increased by only $0.16 over feeding the lower quality alfalfa. If milk is worth $0.18 per pound, then less than 1 pound of higher milk production is needed to cover the additional daily feed cost.

When considering the value of milk production lost due to feeding lower quality alfalfa, it often changes the discussion about the price per ton of hay. In most market situations, feeding alfalfa hay with an RFV of 180 or 200 compared to feeding a lower quality hay with an RFV of 150 will result in higher milk revenues and a lower feed cost per cwt. of milk marketed. Sometimes transportation cost and area market values change these relationships, but this can be a helpful exercise when determining the value of alfalfa hay in the dairy diet.

Many times, higher quality alfalfa hay will actually be priced at a bargain compared to lower quality choices. In determining the value of alfalfa, it is more than just the per-ton price. Dairies need to also consider the negative impacts on milk production when purchasing lower quality alfalfa.

A need for consistent quality

There is value in consistently producing high-quality hay. Dairies depend on the alfalfa grower to provide accurate analysis and consistent quality. A single load of hay may be fed before the hay analysis is returned. Thus, keeping careful track of hay lots and analysis is an excellent way to improve the relationship between a dairy and an alfalfa provider.

This article appeared in the April/May 2020 issue of Hay & Forage Grower on page 16.

Valuing alfalfa is complicated Next