Joe’s alfalfa field had a problem 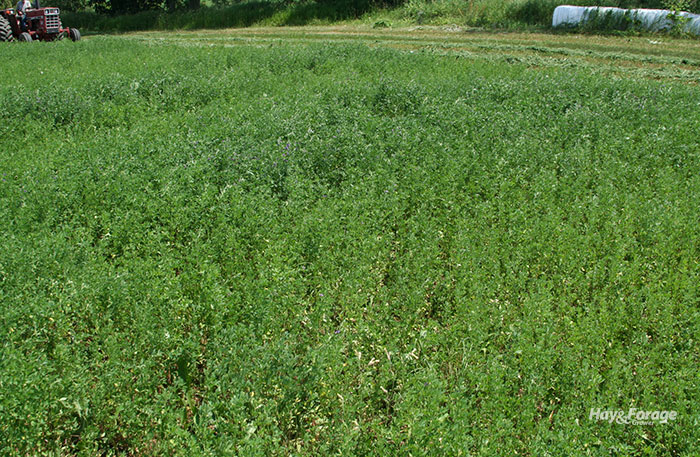 It was actually a sulfur study. I was at Joe’s farm to gather some alfalfa tissue and soil samples from one of his fields as part of a statewide assessment on sulfur fertility. What with fewer industries spewing sulfur particles into the air, the concern was that many fields might be deficient in the nutrient.

Joe pointed me to the field. It looked like a typical alfalfa field for the area, and it was just starting to flower, ready to be cut. The height of the plants was somewhat below average, but there were no obvious deficiency symptoms. Joe told me that the field just didn’t yield as well as he thought it should have.

Earlier in the year, he had his fertilizer retailer take a look at the field. The retailer suggested that he foliar apply a blend of liquid micronutrients. This was done without any evidence (tissue tests) that some micronutrient was really the problem. The treatment didn’t seem to help the field, and Joe pointed out that it didn’t help his wallet either.

I started to walk around and began collecting plant samples across the field. As I crested a small hill on the headland, I noticed a series of dark green patches of alfalfa that were twice the height of the rest of the field. They were uniformly spaced across the headland. This type of thing always arouses my curiosity.

My gut told me that it had to be a fertility issue, but, other than the liquid micronutrients, the field hadn’t received any other fertilizer that year.

I asked Joe about the manure history for the field. He said that he had covered the field before seeding the alfalfa two years previous. I showed him the tall alfalfa patches and inquired if those areas might have received a heavier dose of manure. “Yeah, they probably did,” he said. “That’s probably where the endgate on the spreader opened and the semi-solid manure rolled out the back before I got moving.”

As any Sherlock Holmes agronomist would do, I pulled a soil sample from the “good” area and then a few feet away in the shorter alfalfa. I also took plant tissue samples in each of the respective areas.

Oftentimes, when I came across these “patchy” alfalfa growth situations and took comparative soil samples, the culprit turned out to be a soil pH issue. Make no mistake — ensuring an adequate soil pH is Job 1 when it comes to growing alfalfa, but potassium follows in the Job 2 position. Soil pH wasn’t a problem in Joe’s case. The native soil pH was 7 or above.

Here were the results for potassium (K) and sulfur (S) on Joe’s field:

Even with a previous manure application, sulfur was deficient in this field (sufficiency level was 0.25%), but the bigger issue was potassium. Those good spots may have had higher potassium levels than they needed, but not by much. The good areas appeared to have double the yield, although I didn’t bother to confirm that.

Here was a situation where there was no need for a randomized complete block of four replications to measure statistical significance. The final chapter was easily written with the eye test.

Alfalfa needs adequate amounts of potassium. Yes, it will grow with less than recommended soil nutrient levels . . . but likely not profitably. Without comparative areas or a soil test like we had in Joe’s field, you may never know what you’re losing.

Alfalfa removes copious amounts of potassium, 50 to 60 pounds (as K2O) per dry matter (DM) ton; nearly 100 pounds per acre of 0-0-60 fertilizer for every DM ton harvested per acre. That's what is needed just to maintain current soil fertility, not increase it. Exact fertility recommendations are available from extension offices in every state.

If you want productive, persistent alfalfa stands, supplying adequate potassium fertility is foundational. You just have to do it, whether it’s applied after first cutting, after the last cutting, or split between both. Source and timing are less important than just making it happen. Potassium is not only important for plant function, it also has been implicated for improving winter survival where that is a concern.

It’s been my impression that potassium levels are declining in many fields. Tough economic times will tend to do that. So will corn silage.

As tons and tons of corn silage are now being removed from fields across the country, realize that tons and tons of potassium are also leaving the field. Most of the potassium in a corn plant is in the stalk and this makes removal far greater for silage corn than for a grain-only harvest where stover is left in the field.

It depends on grain and silage yields, but at least 100 pounds of K2O equivalent per acre is not uncommon. Again, consult with your state's extension recommendations. If proper crop removal rates are not considered, soil potassium levels will suffer along with the alfalfa performance. Just ask Joe.

Let the alfalfa seeding begin Next