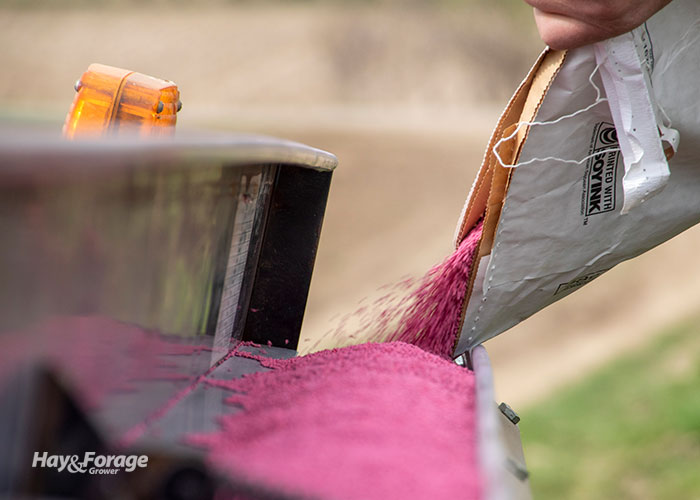 Back in the day, I would constantly correct people when they referred to a “fall seeding” of alfalfa. Fall is simply too late; more correctly, it was, or at least should be in the North, a “late summer seeding” if success is to be had.

Of course, perspective is driven by where you hang your hat, and for those in the Southern reaches of the U.S., fall seeding is probably an appropriate terminology.

Irrespective of nomenclature, the alternative to a spring seeding of alfalfa begins now. In some regions, late summer or fall seedings are the normal means of doing business. That isn’t the case throughout most of northern and central sections of the U.S. Mostly it’s a land availability issue because a large percentage of farmers don’t have fields available unless they grow a cereal or some other short-season crop.

I've always been partial to late summer alfalfa seedings. It was multiple field plots of these seedings that got me through graduate school at Iowa State University. I nurtured and cared for my late summer-seeded field plots as if my life depended on it . . . mostly because it did. The premise of the research was simple — how early the following spring could late summer seedings be cut without damaging the stand? Similar research had just been done in Minnesota with the more conventional spring-seeded approach.

Other than required classes and caring for a wife and young daughter, late summer alfalfa seedings were my life while in graduate school. I seeded plots, counted plants, staged plants, took samples of plants, dried plants, harvested plants and plots, weighed plants and plots, and finally wrote volumes about harvesting late summer-seeded alfalfa. A late July hasn’t passed since those days that I haven’t talked or written about late summer alfalfa seedings.

To be sure, there are risks with late summer alfalfa establishment — just as there are with spring seedings. The primary concern is the possibility of moisture stress during germination and seedling establishment. Timely seeding will reduce this risk significantly.

It’s always advisable to make late summer seeding decisions based upon current soil moisture conditions and short-term weather forecasts. Another risk is the threat of an early killing frost and/or severe winter. Again, timely seeding is important to minimize these risks.

The advantages of seeding alfalfa in the late summer are numerous. These include:

1. Those pesky wet-soil alfalfa seedling diseases are often less of a problem under drier, warmer conditions.

2. Weeds and insects rarely limit stand establishment like they can in the spring.

3. No companion crop is needed or recommended.

4. No herbicide is needed for weed control unless volunteer cereal grain becomes a problem.

5. The near equivalent of an established stand is ready for harvest the next growing season.

Interestingly, I’ve been on two commercial hay farms in the past month where the respective owner had good things to say about seeding alfalfa in the late summer. In one case, they had just started to convert to the practice and on the other farm they were planning to shift from their normal spring-seeded practice.

Not too early, not too late

Seeding dates will depend on location, but a general rule of thumb is six to nine weeks before the first killing frost. Five weeks is usually where I'd set my hard, keep-your-seed-in-the-bag date.

Seeding too early raises the odds for hot, dry conditions during seedling establishment; seeding too late does not give plants enough time to develop adequate root and top growth for winter survival. Generally, it's better to error too early than too late.

Although first-freeze dates are usually used to back calculate optimum seeding times, it really is more of a question of when do the plants stop growing because temperatures are too cool, freezing temperatures or not.

As a general rule, recommended seeding practices for spring seedings apply to late summer seedings from a soil fertility, seeding rate, and seedbed preparation standpoint. It is worth mentioning that a firm seedbed to optimize seed-to-soil contact is especially important with late summer seedings. No-till seedings in late summer have also been successful.

Tired of alfalfa winterkill, undependability Next