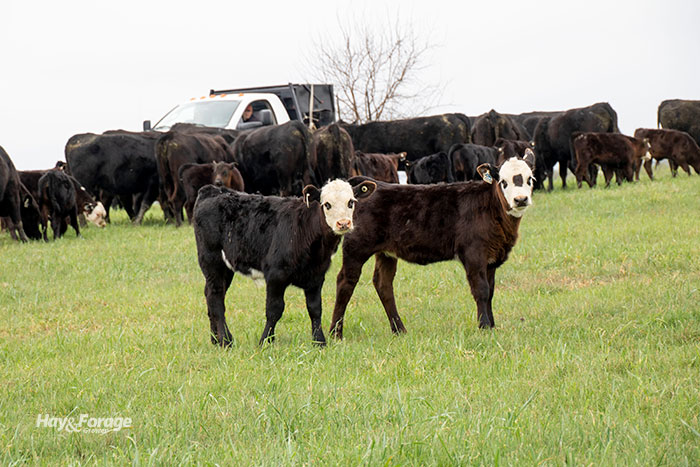 In the southern Great Plains, wheat is by far the most common annual forage that is utilized by cattle operations. Thousands of winter wheat acres are used as dual-purpose grazing and grain crops or grazed out in the spring.

“But if not wheat, then what?” asked Jaymelynn Farney in a recent Rancher’s Lunchtime Series webinar presentation sponsored by Oklahoma State University Extension. “When it comes to cover crops, there is really no one size fits all,” noted the Kansas State University extension beef specialist.

Although there are many options when it comes to planting annual forages within a grain enterprise system, Farney emphasized that the quickest way to maximize returns is to harvest the forage with cattle. “Research shows that we can actually have lactating cows gaining weight while grazing these annual forages,” Farney said.

Many producers have become interested in brassicas as a forage resource. These include species such as turnips, radishes, canola, and hybrid brassicas.

“I have a love-hate relationship with brassicas,” Farney said. “They are highly productive and have exceptional forage quality. They also fit well in crop fields for fall and winter grazing. Conversely, they consist of 80% or more of water, so offering a dry roughage in diets is important,” she added.

Brassicas, like some other annual forages, can be extremely high in nitrates.

Another potential problem with brassicas is their acceptance by cattle, especially calves less than 800 pounds. “If a brassica is planted with a cool-season annual grass, cattle will eat all of the grass before consuming the brassica,” Farney noted. “This becomes less of a problem after a freeze, when glucosinolate levels in the brassicas decline and the plants become less bitter and much sweeter.”

The beef specialist recommends not turning growing calves out on brassicas until after a hard freeze.

Mature cows seem to be less selective against brassicas than stocker calves, Farney noted. This is especially true if the cows have been exposed to brassicas in the past.

If including brassicas in a forage mixture for cows, Farney said to limit seeding rates to 2 pounds per acre or less. “If you put more than that in, the brassicas just outcompete everything else,” she said. “For calves, I don’t like to use more than a pound per acre of seed.”

Legumes are often added to fall forage mixes to provide nitrogen through fixation and to enhance protein levels. Farney pointed out that throughout Nebraska, Kansas, and Oklahoma, the winter growth of legumes is very low.

“The question we have ask ourselves is whether a legume is needed from a cattle diet perspective,” Farney said. “We usually get plenty of crude protein from the cereal grasses and brassicas. As a result, including a legume to a winter forage mixture may just add to your seed cost without resulting in any performance advantages from an animal or forage yield standpoint.”

If stockers are being put on winter pastures, Farney noted that ensuring economic gains becomes critical. The beef specialist said that protein is rarely limiting on annual winter pastures. In fact, she likes to also supplement a little corn to better balance energy and protein. Farney also likes to feed a dry forage source to help maintain rumen function and health.

“When looking at research studies using stockers on annual forage mixtures, it’s striking how variable the gains can be, even in back-to-back years with the same exact mixture and livestock genetics,” Farney said. “In Nebraska, over the course of 10 studies, they documented gains from 0.8 pound per day to 2.3 pounds per day.”

Often, the annual forage pastures can be used as a supplement feed for mature cows. “One system that works pretty good is to graze the cereal pasture in conjunction with a field of cornstalks and limit the time that the cattle have access to the cereals,” she concluded.

South Polls fit well on this grass-fed farm Next