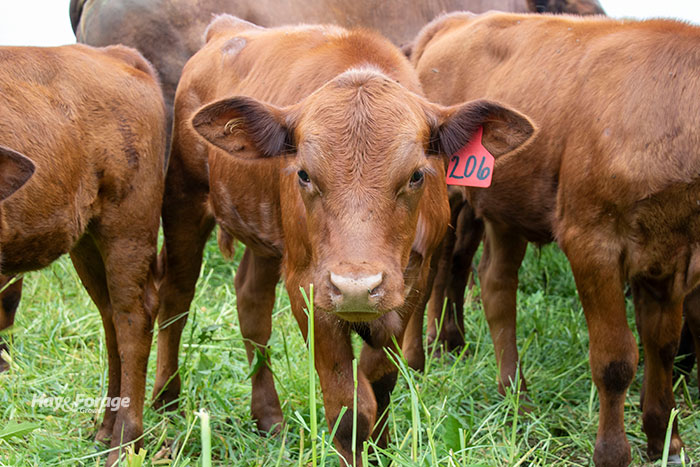 As the 2020 summer intern at Hay & Forage Grower magazine, I was fortunate to have earned the opportunity to travel and seek stories on my own from start to finish. Throughout my summer experience, I had learned the real-world ropes of agricultural journalism.

What I found on my final solo venture of the summer was a house on a hill that was surrounded by a pasture full of cattle. It was the home farm for Grant Bauman and his family in Vienna, Ill. Both Bauman and his wife, Casey, come from row-crop backgrounds but preferred to raise cattle on their own 50-acre farm with their two young daughters. Since my visit, they also welcomed a third child (a son) to the operation.

All 50 acres, plus any other land that the Baumans may rent, are pastures used for adaptive grazing. Although the couple uses round-baled hay for winter feeding, it is bought from local hay producers.

Casey and their two daughters, Hadley and Brett, move the cattle each day to a new grazing area. 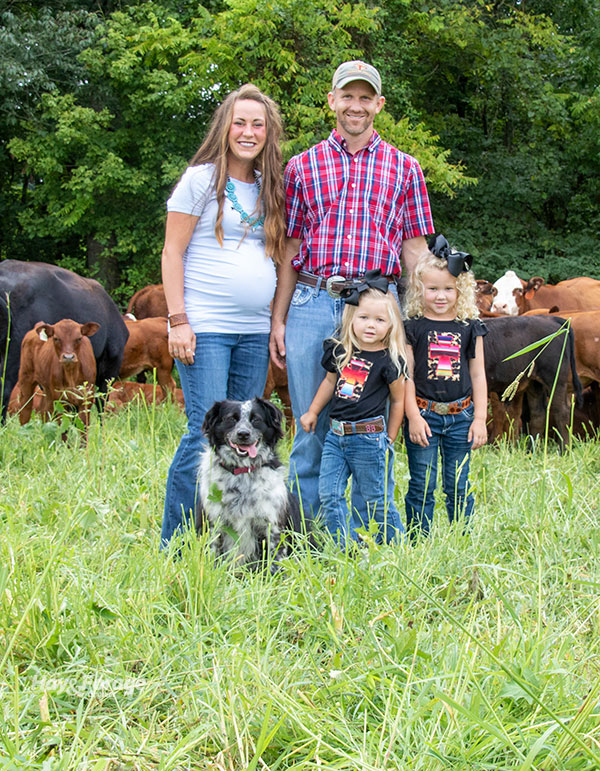 Farming is a family affair for Casey (left) and Grant Bauman, along with their daughters Brett and Hadley. Since the photo was taken, the family welcomed a new baby boy, Pryor, into their ranks.

The family has been through several breeds to find a temperament and genetic combination that suits their farm and preferences. They settled on South Polls.

South Poll is a composite breed, which consists of an equal percentage of Barzona, Hereford, Senepol, and Red Angus. The breed was created with the intent of offering animals that tolerated warm-climate grazing and finished well on grass. Credit for creating the South Poll breed is given to Teddy Gentry, who is more famously known as the bass player in the band Alabama.

According to Bauman, his cattle do well in his pasture-based system, which primarily relies on tall fescue as a forage source. The South Polls on the Baumans’ farm are very docile. In fact, on my visit, young Hadley and Brett bounced straight through the middle of the herd to find their own cows, Patches and Fancy. Their mom and dad looked on with me, trusting their daughters with the small herd of gentle giants.

Just like the Baumans have adapted their breed of choice to fit their farm, the couple manages their pastures in the same adaptive manner. Calling southern Illinois home, Bauman strives to keep his cattle on pasture 300 days out of the year. But as all farmers know, some years you get more, while others you get less than what you hoped for.

Although the grazing base consists primarily of tall fescue, there is added diversity. Bauman and his daughters will occasionally walk through the pastures to count the different plant types. “One time, we counted 30 different species growing in a small area,” he said. “Most of it comes up volunteer, but sometimes we seed in species we want to utilize.” Some in the latter category include orchardgrass, chicory, red clover, and white clover.

The Baumans adapt their stocking rates throughout the year to match the available forage. This past year, with ample forage availability, they were able to stock at 55,000 pounds on 50 acres for two months during late spring and early summer. “We bring more on in the spring during peak growth and move some off in fall when the grass slows down,” he explained.

At times, when the grass grows faster than Bauman can move cattle, cool-season grasses are left standing, but areas with bermudagrass need a little more attention. “The bermudagrass will turn to cardboard, and the cows won’t touch it, so we keep an eye out for those areas and may have to clip it back if it gets too far ahead of the rotation,” he said.

“We manage three things: soil, plants, and animals,” Bauman chimed. “They are all connected. You have to have good soil to grow good plants to raise healthy animals.”

Being flexible with your herd and grazing routines to meet your farm’s needs is an important part of the adaptive grazing theory that Bauman and his family implement on their operation each day.

C.J. Weddle served as the 2020 Hay & Forage Grower editorial intern. She currently attends Mississippi State University, majoring in agricultural education, leadership, and communications. She grew up on a farm in Vardaman, Miss., where her family raises sweet potatoes and soybeans.

Have a plan for winter hay feeding Next