Have a plan for winter hay feeding

The author is a soil conservation technician for USDA-NRCS in Hopedale, Ohio. His family also farms and direct markets pork, grass-fed beef, and lamb. 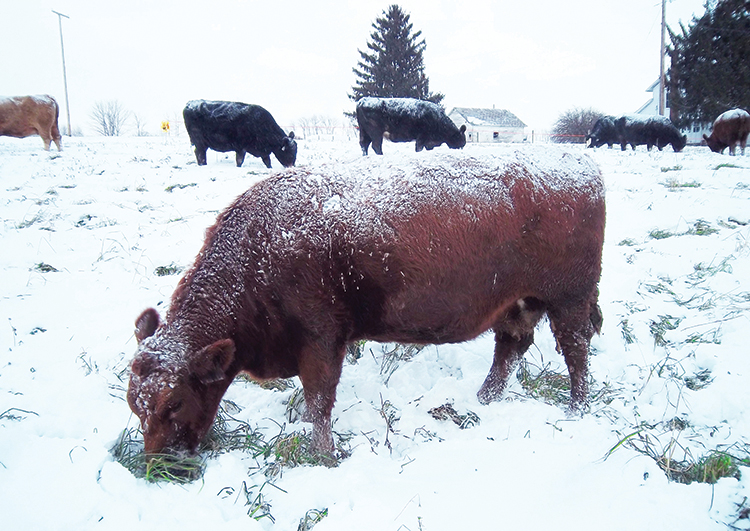 Stockpiling grass is simply a great way to shorten the hay-feeding period.

In a grazing operation, how do we decide when and where to feed hay?

This may seem like a silly question, but the answer is more complicated than one might think. Most would say we feed hay to get through the winter, a time when grazing isn’t an option. Hay might also be fed hay during the traditional summer slump, when forage growth slows, or if drought conditions exist, no matter what the season.

Hopefully, hay is being fed not only to meet livestock nutritional needs but also to protect pastures from being overgrazed. If some sort of management-intensive grazing (MiG) is practiced, and in most cases it should be, overgrazing is one of the first things to avoid if vigorous pasture regrowth is to be resumed after a period of slow growth.

One of the founding principles of MiG is reducing expenses to make an operation more profitable. What is the biggest cost to any grazing operation? It’s the feeding of stored forages or hay.

Stored forages of any kind cost much more than animal-harvested pasture. It takes a lot of time, effort, machinery, and fuel to harvest stored forages. It really doesn’t matter if we do the harvesting work ourselves or if we buy the hay. In fact, for small operations, the costs of producing versus buying hay are often similar.

So, why do we feed hay where we do?

Answers often vary with the farmers I work with. Most of them cite things like convenience, proximity to a water source, or it’s always been done this way. These are some valid reasons, but more thought needs to go into our hay-feeding strategy, especially during winter when every day that our animals are consuming stored forages costs our operation extra time and money. Let’s take a closer look at some winter-feeding options and highlight their advantages and disadvantages.

Create a sacrifice area: Choose a designated area of pasture on which to feed hay. It is best to utilize a small area and not allow animals access to the entire pasture. Hay is hauled to this area throughout the winter to be fed either with or without bale feeders. Here in Ohio, these areas tend to get torn up over winter and turned to mud. Sacrifice areas will usually need reseeding in the spring. If using a sacrifice area, make sure the site has a higher and drier soil type. Locate the area far away from a stream to prevent runoff from contaminating any nearby surface waters.

Unroll round bales of hay: This approach can be used in much the same way as a sacrifice area, but it also has many of the same challenges. Large round bales of hay are rolled out as needed. Thus, the hay is spread out in a long line, allowing all the animals access to hay at one time instead of around a bale. This can be a blessing and curse. While it does allow more animals access to hay at one time, it also results in more wasted hay than other hay-feeding methods. This can be a great way to feed lower quality hay, where the animals can pick through and eat what they want and leave the rest as organic matter and nutrients for the soil.

Bale graze: This approach also follows a lot of the same principles as using a sacrifice area, except that with bale grazing, the bales are typically set stocked in the field well before their use. The bales are normally arranged in rows, on 20- to 25-foot centers. The number of rows usually corresponds to the numbers of bales being fed per day or feeding period. Bale grazing also differs from a sacrifice area in that the livestock are given a new set of bales and a fresh strip of the field for each feeding period. This gives animals a clean area each new feeding period and only damages a portion of the field at a time.

Bale grazing is a great system for spreading manure nutrients across a pasture and giving new life to a poor-quality field. Because the bales are preset, there is less soil damage and compaction from equipment. Like sacrifice areas, though, these fields can get rather muddy, especially near the water source, and may need to be reseeded. 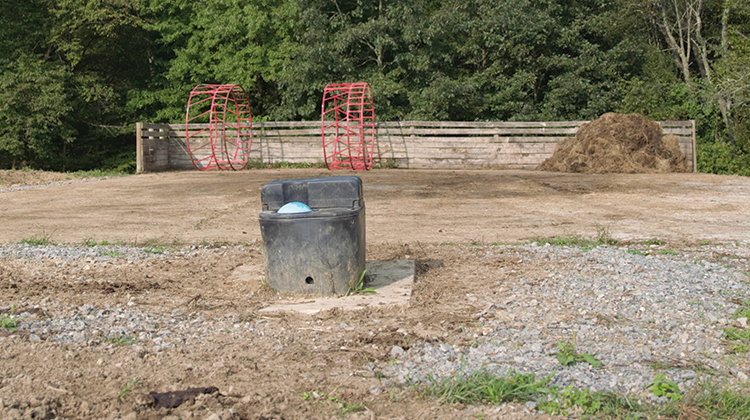 Construct a heavy-use pad (HUP): This is a designed pad of concrete or gravel specifically installed for feeding hay or doing other high-traffic activities. This allows a producer to bring livestock onto a hard surface during winter-feeding operations to limit the muddy conditions encountered in other outwintering-type systems. Of course, HUPs require additional practices in order to be totally mud-free.

Water will need to be supplied to livestock, preferably on the pad. Access roads for machinery and livestock traffic also need consideration. HUPs may also require some sort of runoff prevention, such as a roof or curb, as well as an animal waste storage facility. One problem with a HUP is animal comfort. They are usually smaller areas and can get sloppy at times. Adding nearby mounds of soil or stone provide the animals somewhere to escape the sloppy conditions on the HUP.

Build a dry-pack or deep-bedded barn: With this option, a barn is built in such a way to allow the hay to be fed inside while the bedding and manure builds up over the feeding period. Either a feedbunk or bale rings can be used to feed hay. The downside for many producers is that straw, sawdust, or waste hay is needed to allow the manure to stack on its own. While this is one of the more expensive hay-feeding options, it does allow for animal comfort while ensuring that manure runoff is not a problem. All things considered, the cost of these types of buildings may not be much more than other systems when the added benefits are considered.

This can be done with annual forage species but also by stockpiling perennial grasses. Tall fescue is especially beneficial for this purpose. It will produce a sort of standing hay and withstand the harshest of winters while still providing quality feed. The only challenges are deep snow and muddy conditions.

Extending the grazing season with stockpiled grass or winter annuals, while also slightly reducing your herd size to allow for extra forage growth, could enhance profit per acre over the entire grazing operation. Of course, to take full advantage of this practice, it should be a part of a MiG system.

Ultimately, the best winter-feeding system will use a combination of several of these options. If you’re looking to improve the winter feeding strategy on your operation, call the local Natural Resources Conservation Service (NRCS) office, Soil and Water Conservation Department (SWCD), or extension office. Also, consider attending local grazing council meetings or pasture walks and discuss these options with other like-minded producers. Videos are also available on the Eastern Ohio Grazing Council YouTube channel.

This article appeared in the January 2021 issue of Hay & Forage Grower on pages 22 and 23.

Plan and monitor for extreme weather Next