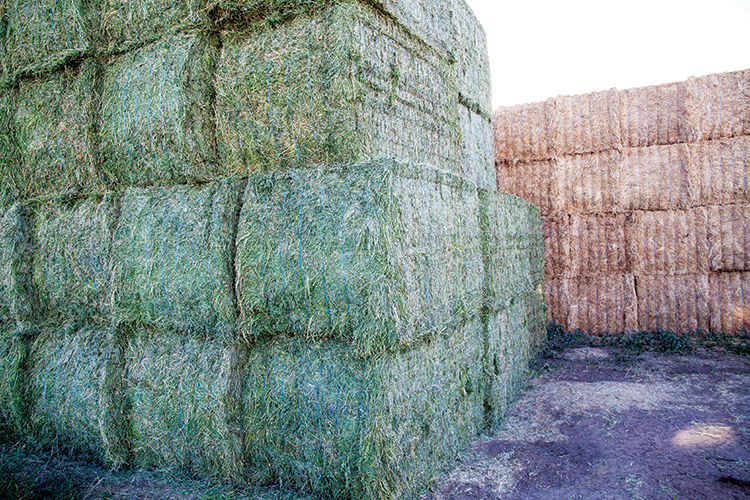 So, if a high alfalfa hay price is all about excellent quality, which is often measured as total digestible nutrients (TDN) or relative forage quality (RFQ), then pragmatic growers will produce hay with as low of an acid detergent fiber (ADF) level as possible because lower ADF hay results in higher TDN/RFQ hay, and that will always sell at a higher price. Right?

In fact, alfalfa hay (air dry basis) with a TDN of 56 was a good dairy hay 20 years ago, but now it needs to be closer to 60. This drove growers to boost hay TDN and, in so doing, hays with very high TDN values, even in excess of 62 and into the Supreme grade, were produced and marketed. While this sounded like a high-priced hay opportunity to growers, an odd thing happened on the way to the market — dairy producers were only prepared to pay more for hay with higher TDN up to a certain point and, after that, little more.

Lower ADF values in alfalfa hay are linked to changes in other nutrients, and most of them are positive relative to the energy (TDN) value of the hay. The most obvious change is that as the ADF drops, so does neutral detergent fiber (NDF), which captures all of the structural fiber. Acid detergent fiber, on the other hand, only captures 70% to 85% of the structural fiber. Since NDF is the slowest digesting portion of the hay, a lower concentration will improve the hay’s energy level.

As ADF and NDF both decline, the digestibility of the NDF improves, which means that on a unit NDF basis, there is more energy from NDF but less NDF energy in total. Thus, it’s a double positive for TDN — less NDF that is more digestible.

Another benefit associated with declining ADF/NDF levels of alfalfa hay is that nonfiber carbohydrate (NFC) concentrations increase. As NFC are rapidly fermented in the rumen of the cows, more NFC results in higher energy (TDN) in the hay.

Finally, lower ADF levels in alfalfa hay cause the crude protein (CP) level to rise. Crude protein is required in relatively high quantities by dairy cows and, if not supplied in hay, it must be purchased in costly protein meals such as soybean or canola. And, as with NDF, it is not just that CP concentration is enhanced as ADF declines. The indigestibility of the CP fraction is decreasing as well, which means that on a unit CP basis, there is more digestible CP in the hay.

It is clear that as the ADF level of hay goes down, a number of other components change, and all of these changes will improve the energy (TDN) of the hay. But doesn’t this merely confirm that the hay price should be higher as its ADF level drops?

Actually, this isn’t always true because the reduction in NDF level in the hay will also reduce the amount of ruminative chewing by the cows, as well as the resultant salivation that buffers rumen fermentation in order to prevent a low pH and acidosis. So, lower ADF/NDF makes alfalfa hay less of a forage and more of a concentrate, especially when they are at very low levels.

Alfalfa hay only makes up a portion of rations fed to lactating dairy cows, and this level has been declining in recent years to only 5% to 15% of the forage dry matter (DM) fed. So, it is not just hay that impacts intake, but all ration ingredients. While DM intake of dairy cows fed any particular ration is influenced by numerous factors — only some of which can be described mathematically — two key factors that impact intake of a ration are its level of structural fiber (NDF) and its level of NFC (starches, sugars, and pectins).

Diet NDF limits intake by enhancing ration bulk, thereby requiring cows to spend more time eating and ruminating (cud chewing) per unit of ration consumed. Since there is a limit to how much time cows can do this in a day (about 14 hours or 35,000 chews), as the ration NDF level gets too high and/or its digestibility (dNDF) declines, potential intake of the ration is more limited.

In contrast, NFC provides no bulk to the ration, but it does provide carbohydrates that are very rapidly fermented in the rumen. If the amount and rate of fermentation of these carbohydrates create fermentation products faster than bacteria in the rumen can use them, then they accumulate in the rumen and drive down pH. Low rumen pH (acidosis) is a problem in cows fed rations too high in NFC, but, perhaps more importantly, acidosis depresses appetite, and total feed intake is reduced. Thus, intake of any ration tends to be depressed if the NDF level gets too high or too low.

So, how does the ADF/NDF level of alfalfa hay that is only a part of the ration impact its price?

If, for example, intake of a diet is limited by too much NDF, then reducing the ADF/NDF, which also elevates dNDF, will improve intake leading to greater energy intake and higher milk yield. Bottom line: The price of alfalfa hay with a lower ADF increases when diet ingredients high in NDF are abundant and/or inexpensive.

If intake is limited by high NFC, then boosting ADF/NDF levels will reduce the NFC level in the ration, thereby improving intake, which leads to higher energy intake and greater milk yield. Bottom line: The value of alfalfa hay with a higher ADF increases when diet ingredients high in NDF are in short supply and/or very costly.

When Good is good enough

Rations for dairy cows are commonly formulated to meet minimum and maximum levels of NDF and NFC. Nutritionists know that the most effective high-group dairy rations contain about 27% to 32% of the DM as NDF and about 36% to 42% of the DM as NFC. Rations out of these ranges depress intake and animal performance.

When, as is currently the case in California, availability of forages with high levels of dNDF are limited and expensive, then nutritionists allow the NFC level of rations to drift up and NDF levels to drift down. This means that low ADF/NDF alfalfa hay is a poor choice as the dairy producer is giving up hay with higher NDF levels (and lower NFC levels) at the time that their nutritionist is struggling to keep ration NDF levels up and NFC levels down. Thus, the relative value of Good-grade hay is enhanced, and Supreme/Premium grades hold a lower value.

Alfalfa hay is a premier forage for dairy cows, but the relative value of the TDN/RFQ grades will vary dependent on availability and price of competing feeds. If forages with high dNDF levels are in limited supply, then the value of Good-grade hays with higher NDF will increase relative to Supreme/Premium hays with lower NDF concentrations.

Current alfalfa hay pricing is a sensible economic response to known biological responses of dairy cows to rations that can be formulated based upon availability and prices of available and/or cost-effective feedstuffs. Since alfalfa hay inclusion levels in dairy rations are likely to decline further in the future due to state water restrictions, we can expect to see narrow price differences between Good and Supreme/Premium alfalfa hays for the foreseeable future.

This article appeared in the February 2021 issue of Hay & Forage Grower on pages 10 and 11.

Turning down the irrigation spigot Next