Turning down the irrigation spigot 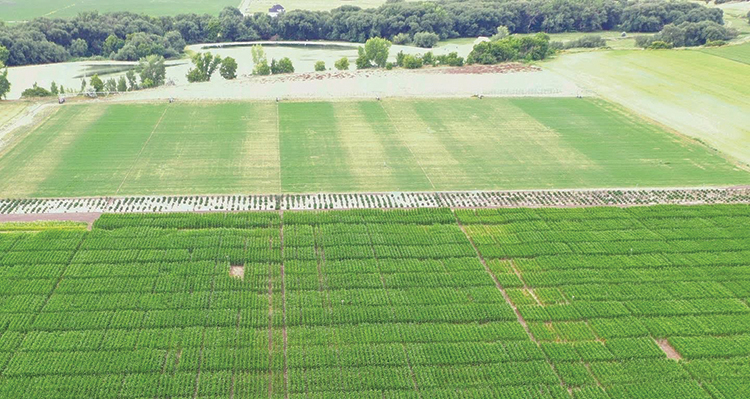 Restricting the amount of water that a crop needs is not an ideal strategy to produce forages. Sometimes, however, it’s necessary.

Alfalfa is a scavenger
Alfalfa is naturally drought tolerant. Its lengthy root systems can reach over 15 feet deep, providing access to a greater soil volume to scavenge water. Alfalfa also has a unique ability to go into drought-induced dormancy when water is scarce. This feature allows for irrigation to cease at almost any time during the growing season without permanent damage to the stand. This approach of ceasing irrigation is usually superior to keeping it dull green with little to no alfalfa growth. When irrigation or soil moisture can resume to adequate levels, plants break the induced dormancy and resume growth – often returning to full production levels.

Alfalfa uses water most efficiently during spring growth, so irrigation should be targeted earlier rather than later in the season, if possible. The first cutting will use about 5 acre-inches of evapotranspiration per ton of alfalfa, compared to about 7 acre-inches for later cuttings. Plus, the first cutting is usually the highest yielding crop. Initially, target alfalfa partial irrigation to the most productive alfalfa land — areas with the best soils, best irrigation efficiency, best alfalfa stem density, least weeds, youngest alfalfa, and/or the best varieties.

Small grains are early users
Small grains such as wheat, barley, and oats are good annual forage crops during a drought because their water use is early in the season when greater precipitation and spring runoff generally occur. Forage harvest generally occurs in June or July and requires no late water, except for late planting or double cropping scenarios.

Target corn growth stages
Expected water supply and timing of availability should be considered before planting corn to ensure the plants can reach maturity. It is a large investment to plant corn, and partial irrigation strategies will be of little value if no grain is produced to enhance corn silage yield and quality. If water availability is uncertain or water may not be available through the whole growing season, consider other cropping options.

When planting corn, selecting appropriate hybrids is important. For example, shorter day corn that matures quicker can be planted in cases where water may not be available toward the end of the growing season. Target partial irrigation to critical growth stages where near full irrigation levels are crucial to yield determination. These include tasseling, silk, and yield formation. The best time to water stress corn, if needed, is generally during the vegetative and ripening stages. Since grain is such a vital part of good quality corn silage, strategies for partial irrigation of corn silage are usually similar to those for partially irrigating corn grain.

Teff requires little water
Teff is known as a drought tolerant crop that thrives on low irrigation levels at frequent intervals. It is planted in early summer (early to mid-June) in most areas, which generally allows for early water (pre-June) to be concentrated on other crops. Early summer planting generally allows for two cuttings with the first yielding more than the second.

Few partial irrigation studies have been published for teff, but recent research in the Pacific Northwest showed teff required about half the amount of irrigation that alfalfa requires, and that excessive irrigation decreased forage quality. Given the lower irrigation requirement of teff compared to other forages, it may not require partial irrigation. If partial irrigation is desired, the best strategies may include planting in mid-July and only harvesting once and/or increasing irrigation frequency and reducing the rate such that less total water is used than for other forages.

And the research says . . .
A team of researchers at Utah State University started testing partial irrigation strategies for major forage crops in 2019. We evaluated irrigating corn silage at a site near Logan, Utah, with full irrigation (as close to potential evapotranspiration as possible) compared to a 25%, 50%, and a targeted 50% reduction in total irrigation rates for the growing season. This was accomplished by adjusting sprinkler nozzle sizes on a linear irrigation system.
The 50% targeted rate applied half the total irrigation for the season, but this irrigation was targeted toward critical growth stages such as during corn tasseling or mid- to late-vegetative growth for other forages. This work was repeated and expanded in 2020 to include sites in Logan and Vernal, Utah. Logan included a new alfalfa stand with two cuttings and corn silage, while Vernal included spring three-way forage (wheat, oat, and barley), teff, and corn silage (see figure).

Alfalfa: Two cuttings of alfalfa were harvested in 2020 in Logan. A total of 13.5 inches of irrigation was applied for both cuttings for the full irrigation rate. When irrigation was reduced by 25%, alfalfa yield was reduced by an average of about 0.75 tons per acre (20%) total for the two cuts. A 50% reduction in irrigation produced an average of 30% less yield (1.15 tons per acre). Results were mixed for the 50% targeted irrigation. It was much worse than the straight 50% reduction for the first cutting but much better in the second cutting.


Looking forward
Partial irrigation research at Utah State University is ongoing. In 2021, we will continue our work in Logan and Vernal and will also include a third site in Cedar City. Forage quality, crop profit, and water use efficiency are in the process of being summarized.

This article appeared in the February 2021 issue of Hay & Forage Grower on pages 28 and 29.