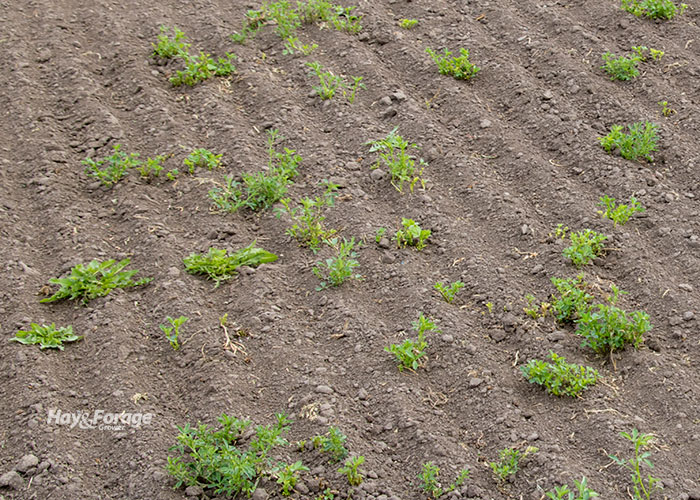 It’s been known for a long time that seeding alfalfa into or immediately after a terminated alfalfa stand doesn’t often yield good results. But that’s about all we know.

Kim Cassida, a forage extension specialist with Michigan State University, is on a mission to try and unlock some of the mysteries of alfalfa autotoxicity and help farmers determine if a field is safe to plant back into alfalfa. She recently reported on her progress at the Midwest Forage Association’s Virtual Symposium.

Alfalfa produces toxins that reduce the germination, survival, and vigor of its own seedlings. “We really don’t know what specific toxin or toxins are responsible for alfalfa autotoxicity,” Cassida said. “There’s probably more than one chemical involved. We know that these toxins are water soluble, disappear from soil over time, and they exist in a higher concentration in the leaves and flowers than in the stems and roots.”

The practical implications of alfalfa autotoxicity are that alfalfa can’t be interseeded into alfalfa to thicken stands, and seeding alfalfa too soon following alfalfa will result in reduced or failed establishment.

Cassida suggested that what might be a bigger problem is autoconditioning or autosuppression. This is when alfalfa plants establish but their root systems are damaged or compromised, which reduces stand life and productivity.

The magnitude of the autotoxic effect is impacted by several factors. Of primary influence is precipitation. “Because the toxin is water soluble, the more it rains and the more water that percolates through the soil, the sooner the toxin disappears,” Cassida explained.

The forage specialist also noted that soil type plays a role in autotoxicity. The alfalfa toxins are loosely held on sand particles and tightly held to silt and clay particles.

Because sandy soils allow for more leaching, the toxins are more likely to clear the root zone quicker in a sandy soil than in a fine-textured soil. However, the degree of toxicity immediately after stand termination will be greater on a sandy soil.

Another important factor is tillage. Although Cassida doesn’t normally promote excessive tillage, she acknowledged that tillage is your friend when it comes to alfalfa autotoxicity. “It’s been clearly shown that tilled fields negate some of the effects of autotoxicity,” the forage specialist noted. “This is probably because it stimulates biological activity. If you are going to plant alfalfa after alfalfa using minimal or no-till tillage, it is probably going to require a longer waiting period.”

Previous alfalfa stand factors also play a role in alfalfa autotoxicity. An older plant will have more toxin that builds up around it. Conversely, younger plants in first-year stands are thought to have low toxin levels. Hence, reseeding alfalfa after a failed first-year stand is much less risky.

To further muddy the waters, Cassida said that alfalfa genetics appears to have an influence. Several studies have shown differences in variety response when they were subjected to alfalfa root extracts. “This might be because varieties differ in the amount of toxin produced by the first variety and/or there are tolerance differences in the second variety,” she explained.

“It would really be helpful if we could identify the specific chemicals responsible for alfalfa autotoxicity,” Cassida said. “This could allow for breeding programs to focus their efforts on selection of plants with low concentrations of these chemicals.”

Why not an assay?

During the past few years, Cassida has been involved in developing an alfalfa autotoxicity bioassay. She places soil on top of an agar medium in a flask. Seed is then planted into the soil, and within a few days the roots make their way into the agar medium where they can be observed.

The goal is to provide a means such that farmers would be able to submit soil samples from fields targeted to be seeded to alfalfa. They also would submit a small sample of seed they plan to plant. Within a few days, the degree of autotoxicity would be known and reported back to them.

In her controlled experiments to date, Cassida has been able to detect significant response differences for both soils and alfalfa varieties. She’s working to fine-tune the bioassay for eventual commercial use and needs to verify results by growing alfalfa in soils identified as high or low autotoxicity risks. Verification studies will be done in the greenhouse and farm fields.

Finally, Cassida wants to explore the role of soil health. “I think when we have a healthy soil with lots of microbial activity, we’re going to have a faster breakdown of the toxin,” she opined.

Until her bioassay is perfected, the forage specialist recommends farmers follow these guidelines to avoid alfalfa autotoxicity:
1. Wait six to 24 months after termination of alfalfa stands before replanting alfalfa.

4. When alfalfa stands thin, extend them by overseeding other legumes such as red clover or cool-season grasses.