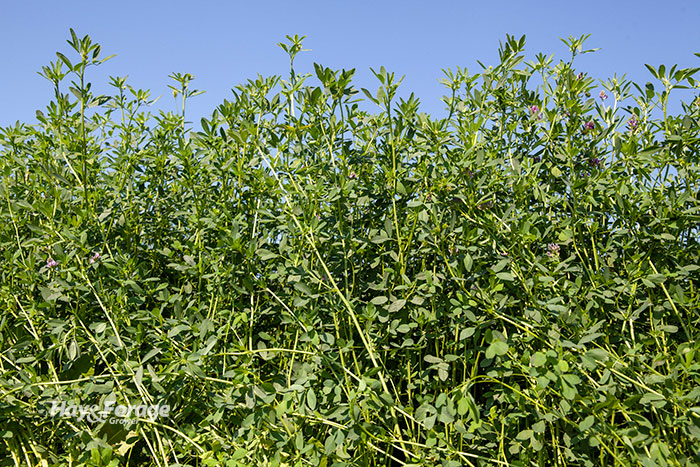 It was a long run of soft commodity prices, but the stagnant situation of recent years came to an abrupt halt during the back half of 2020 as corn and soybean prices skyrocketed to levels not seen since 2014. Following this trend are the elevated prices of by-product protein sources such as soybean meal.

As protein prices go, so also should follow the value of alfalfa as a diet component in dairy and growing beef rations.

“We have underappreciated the value of alfalfa as a protein source,” said Dan Undersander, emeritus forage agronomist with the University of Wisconsin. “Although alfalfa adds fiber to the ration, has a high rate of passage, and is palatable, it really brings value from a protein perspective. Whereas average corn silage is about 7.5% to 8.5% crude protein, alfalfa is 18% to 22%,” he explained during a recent Alfalfa U webinar presentation.

Alfalfa leaves contain about 25% to 30% crude protein while the stems have only 6% to 10%. Generally, tall or stemmy alfalfa is lower in protein than shorter alfalfa. “Alfalfa grown with limited water that is shorter tends to be higher in crude protein than alfalfa with adequate water and normal height,” Undersander noted.

No plant protein source is perfect, and alfalfa is no exception. The forage specialist explained that plant protein is broken down in the rumen and incorporated into microbial protein. This microbial protein in the rumen contains fewer sulfur-containing amino acids than what was in the original plant material. These sulfur-containing amino acids include lysine, methionine, and cysteine.

Even with alfalfa having more than adequate levels of these specific amino acids, some of this benefit is lost to the animal when a high percentage of the protein is degraded in the rumen.

Another issue with excessive protein degradation in the rumen is that this leads to excessive ammonia nitrogen being produced. The ammonia nitrogen is converted to urea in the liver, excreted in the urine, and comes with a metabolic cost to the animal along with an economic loss to the farm.

Problems aside, alfalfa remains an excellent protein source. Undersander noted that the protein content of alfalfa can be enhanced by cutting early, choosing a more dormant variety at the expense of yield, minimizing leaf loss through the harvest process, and using a proven lactic acid-producing inoculant for silage, which reduces protein degradation during fermentation.

“Dry alfalfa hay has more bypass protein than alfalfa haylage,” Undersander noted. “This is because silage fermentation bacteria breakdown some of the forage protein into peptides, which are degraded by rumen bacteria. In one study, the nonprotein nitrogen content of ensiled forage increased by 66% while hay only increased 25% compared to afresh forage control,” he added.

Heating of hay or silage will cause sugars to bind with proteins. This is known as the Maillard Reaction. While a little heating makes the forage more palatable and enhances the amount of bypass protein, too much heating allows most of the protein to pass through the animal and offers limited nutritional value.

The Holy Grail for alfalfa is to try to boost the crop’s contribution to bypass protein in a feed ration. “We can increase the amount of bypass protein in alfalfa by delayed cutting,” Undersander said. “That’s not an option if you’re looking for high-quality forage, but it’s still good to keep in mind not to cut any earlier than is necessary for the type of animal being fed.”

Researchers and plant breeders have taken several approaches to enhance the amount of bypass protein in alfalfa. One was to artificially heat the forage, but this approach proved to be too costly, Undersander explained.

Another effort is focusing on incorporating more tannins into the alfalfa plant. Tannins are naturally occurring compounds that bind to proteins. They are found in species such as birdsfoot trefoil and sainfoin. Tannins also make a forage less likely to cause bloat when fresh forage is consumed.

Alfalfa naturally produces tannins in its seed coat but not in the leaves and stems.

“This means that the genes are present in the plant for tannin production, but getting these genes to ‘turn on’ in the leaves at just the right concentration is a difficult task,” Undersander said. “Too much tannin can have a severe detrimental effect on forage digestibility and intake.”

Red clover naturally has more undegradable protein than alfalfa. It contains certain enzymes that help inhibit protein breakdown during silage fermentation. Knowing this, plant breeders have been working to move these targeted enzyme-producing genes from red clover into alfalfa.

As plant breeders continue to try and improve alfalfa protein utilization, Undersander reminded listeners not to discount the protein value that the crop brings to a cattle ration. That value climbs as other protein sources soar in price.

“With the continued research efforts to improve the amount of bypass protein, the future of alfalfa looks extremely bright,” Undersander concluded.