The author is an extension agricultural economist with the University of Kentucky and a grass-finishing cattle farmer in central Kentucky. 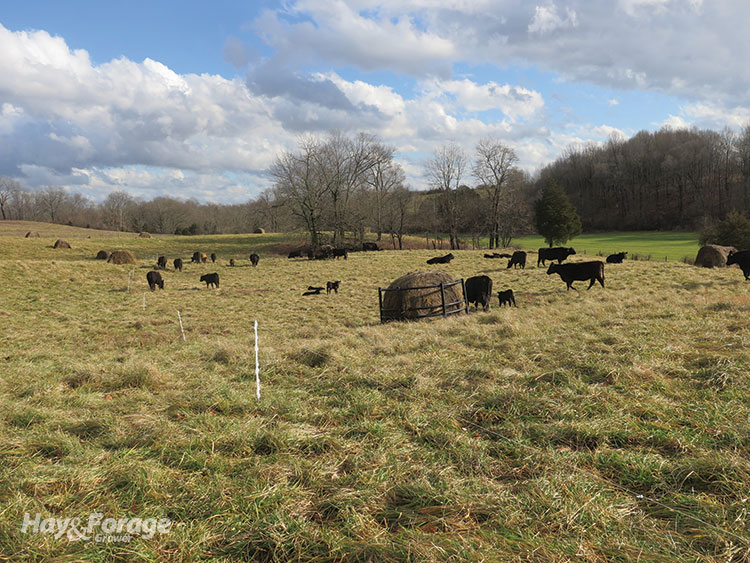 Imagine a hay feeding system where you do not have to use a tractor for months at a time while you also build up pasture fertility without applying commercial fertilizer. What if this same system kept your cattle clean during the winter without hair coats caked in mud and built up organic matter levels in your pasture soils.

Have I got your attention?

Bale grazing is a winter-feeding method where hay is set out on pasture and fed in a planned, controlled manner, somewhat like rotational grazing. Temporary electric fencing limits cattle access to those bales that you want fed in the current move. With each move, a fence is set up to expose new bales, usually 50 to 75 feet in front of the previous fence, which is then taken down to allow the cattle access to the new bales.

Where hay rings are used, they are rolled from the old bales to the new bales and flipped over into place. The process is typically repeated every one to seven days. The main requirements for making it work are an open mind, advanced planning, and cattle trained to electric fence.

Ideally, hay is set out on pastures in late fall or early winter and placed exactly where it will be fed. Moving wagonloads of hay in dry conditions is much more efficient than hauling one or two bales at a time by tractor through the winter. I recommend setting out 1/4 to 1/3 of the needed winter hay at a time. This offers the efficiencies of moving large amounts of hay at one time and allows for recalibration of the bale grazing plan with gained experience. After a couple of winters, you will be able to better estimate your hay needs and feeding densities.

Always start from a water source and move away from it. You do not need to use a back-fence during the dormant season, but it is a good idea, when practical, to set up two forward fences. One is for the current move and another is for the next move. In case something happens to the first fence, there will still be a fence up to protect the majority of remaining hay bales.

The key to effective bale grazing on wet soils is to constantly move forward to new areas that haven’t seen cattle or tractor traffic all winter, and to feed at low hay densities. When fed at lower densities, these rested sods will be able to take the impact from short-term hay feeding events.

Each bale of hay contains mineral nutrients that either come from soil reserves or from applied fertilizer. When fed to livestock, most of these nutrients will pass through the animals and can be recycled for future forage growth. As an example, a 5x5 mixed-grass bale weighing 1,000 pounds will contain around 18 pounds of nitrogen, 6 pounds of phosphorus, and 26 pounds potassium. At pre-2021 fertilizer prices and assuming 75% of these nutrients are effectively recycled for plant growth, this would amount to around $14 in fertilizer value. If that hay sold for $35 per bale ($70 per ton), the fertilizer value would be 40% of the overall value of the hay.

How and where you feed this hay will make all the difference in nutrient recovery. To be effective, nutrients need to be returned to areas on the farm that can effectively use them. If nutrients are lost before this occurs, or if nutrients are spread on areas that are already high in fertility, much or most of the potential nutrient benefit will be lost.

We don’t always think about the overall process of feeding hay in terms of nutrient flow, but that is essentially what it is. You are exporting nutrients from hayfields and importing nutrients wherever you are feeding the hay. If you make your own hay, feed it during the winter, and spread commercial fertilizer back onto the hayfields and pastures every spring, you have a broken nutrient cycle. The same is true if you buy hay and still fertilize your pastures year-after-year.

With conventional hay feeding methods (sacrifice areas, feeding pads, and traditional feeding barns) where manure is gathered and spread, the nutrient cycle is almost always broken. This is because approximately two-thirds of the nitrogen and 90% of the potassium excreted by cattle is in the urine. Unless there is a high carbon source such as sawdust, straw, or woodchips that can tie up these nutrients, it will be almost impossible to keep them from volatilizing, running off with surface water, or leaching into the soil when fed in a concentrated feeding area.

The best research comparing bale grazing to conventional feeding was a master’s thesis by Paul Jungnitsch in 2008. In this Saskatchewan research, nutrient capture and subsequent forage growth with bale grazing was compared to conventional drylot feeding where manure from the same number of cows was spread back onto an equivalent amount of pasture.

Soil inorganic nitrogen (readily available to plants) was 187% higher in the bale-grazed pastures while extractable potassium was 185% higher. Subsequent forage growth over the next two years was 127% greater in the bale-grazed pastures, and protein levels of this forage were 74% higher. Bale grazing was the clear winner over drylot feeding when it came to retained nutrients and subsequent forage growth, and it wasn’t even close.

Unrolling hay is another method that gives great nutrient distribution and is currently used with much greater frequency then bale grazing, at least in the eastern U.S. There are three disadvantages that come with unrolling hay the traditional way: increased hay waste, increased tractor use, and pugging pastures when unrolling in wet conditions. Bale grazing gets around these two problems by avoiding tractor use while offering near equal nutrient distribution.

Some farmers envision bale grazing taking up a lot of time because cattle need to be moved around the pastures all winter, in addition to rolling hay rings and moving temporary fencing. In reality, a well-designed and executed bale-grazing system will significantly reduce both labor and machinery costs. I have seen many instances where tractor use was reduced by over 90% compared to traditional hay feeding methods. A large part of this savings comes from moving hay in bulk when the weather is dry.

I used to think the improved capture of nutrients and reduced winter-feeding machinery costs were the primary benefits of bale grazing, but I’m not so sure anymore. The additional manure and hay waste deposited on the pastures will stimulate soil organisms and “prime the pump” for biological nutrient cycling. This is particularly valuable on rundown farms. Soil organic matter and improved forage growth will improve through this biological awakening.

Improved animal health from bale grazing results by constantly moving the feeding area and having less associated mud problems typical with conventional feeding. Mud creates two main problems for cattle during the winter: More energy is needed to walk through it compared to solid ground, and mud that cakes on cattle robs the hide of its insulation properties. Both of these problems raise energy requirements at a time that is critical for maintaining body condition. Eliminating muddy winter conditions will greatly improve the health of cattle and is especially important for calves.

Bale grazing originated in the High Plains of the U.S. and Canada. While it is ideally suited for this region because of its typically dry conditions and frozen soils during the winter, bale grazing can be modified for effective use in other regions.

The main reason people are afraid to try bale grazing in regions with more rainfall and warmer winters is over concerns it will damage or pug their pastures. While this is a legitimate concern, I have generally found that with good management, pugging can be kept to a minimum in most years and hay feeding areas can be easily renovated.

The key to mitigate pugging is feeding at low densities and to keep the cattle moving forward. In the upper South, I generally recommend feeding densities to 2 tons of hay (roughly four, 5x5 bales) or less per acre, particularly when starting out. This point cannot be stressed enough for this region: Feeding at higher densities can result in severe pugging in wet conditions. Producers in regions where it freezes over for long periods during the winter can feed at higher densities.

Hay waste from leaving bales outside for months at a time is another concern. Hay set out in late fall or early winter after temperatures have dropped will experience very little hay loss because the biological organisms that break down the hay are not active at this time of year. If you set out hay in late fall that is in good shape with a thatch largely intact, you will be amazed by how little loss occurs, even by March.

With continued bale grazing, pasture nutrient levels will be built up to the point where little benefit is realized from continued hay feeding on them. At this point, and it may be years or decades before it is reached on a particular farm, the only place left to feed bales to get the full benefits of the nutrients will be on hayfields where they were harvested. I realize that probably sounds like a radical idea to some, but I have seen it done with good management, even on wet-prone soils.

Bale grazing is not for everyone. It takes good management, reasonable stocking rates, cattle that respect electric fences, and a willingness to try something new to be successful. However, the benefits can be great: lush, high-fertility pastures without spending a cent on commercial fertilizer, major reductions in machinery and labor costs, and healthier wintering conditions for the cattle herd.

Frost seeding may never offer a bigger return Next

Why strip graze in the winter? Previous