By Kim Mullenix and Landon Marks

Mullenix is an extension beef specialist and Marks is an animal science and forage regional extension agent. Both are with the Alabama Cooperative Extension Service. 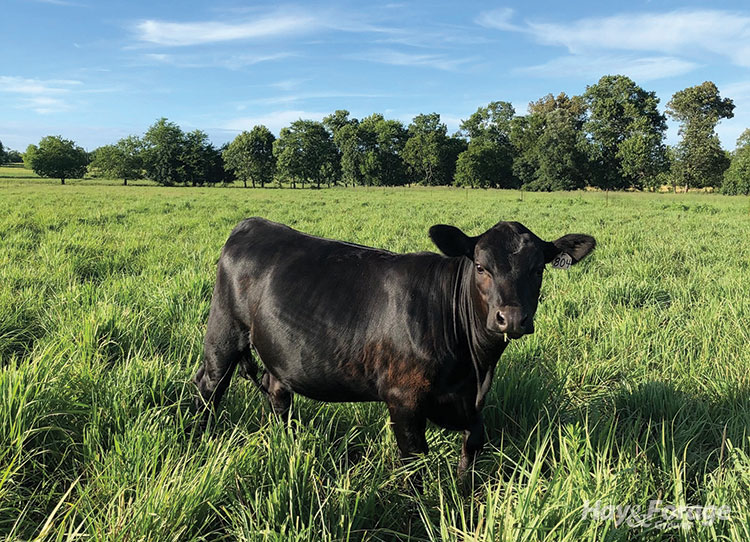 Native warm-season grasses are bunch grasses that are indigenous and well-adapted to North America. These species can be used as a part of forage production systems and are most productive during the warmer months of the year, typically from April through mid-September in the southeastern U.S.

A timely and sometimes unmentioned characteristic of native grasses is their ability to produce good yields with reduced nitrogen inputs, although native grasses will respond with additional yield to nitrogen fertilizer.

In a recent three-year study in Alabama, a mixture of big bluestem, little bluestem, and indiangrass was managed under continuous grazing as a system for developing beef replacement heifers. The mixture either received 60 pounds of nitrogen per acre following spring emergence or no nitrogen during the season. Based on soil test information at the beginning of the study, no additional potassium or phosphorus amendments were needed during each year of the trial.

Beef heifers were placed on native-grass pastures at the time of weaning and had an average weight of 625 pounds at the beginning of the grazing season. Pastures were grazed when native warm-season grasses reached a target height of 20 inches, which typically occurred in mid-May to early June.

Over the three-year evaluation, there were no differences in seasonal forage production in this mixture when receiving a low amount of nitrogen fertility or no nitrogen at spring emergence. Average forage mass during the grazing season was 2,970 pounds of dry matter per acre across the two nitrogen fertility strategies. Beef heifer performance was 1.1 pounds per day of gain, with an average stocking rate of 855 pounds of animal body weight per acre.

Heifer average daily gain on other warm-season perennial grasses adapted to the Southeast are often 1 to 1.5 pounds per day. If additional gain is needed to meet animal performance goals prior to breeding, feed supplementation on pasture can be used to improve gains, especially late in the grazing season when forage quantity and quality begin to decline. The grazing season length in each year was about 75 days.

We conducted plant density and stand persistence measures in this trial to determine if stand health was maintained or declined as a result of our nitrogen management strategy.

There was no change in the native grass stand plant density during this study for either nitrogen fertility strategy. In the moderate stocking rates used in this trial, native warm-season grasses provided adequate forage quantity to fill the summer production season with minimal fertility inputs. Conducting an annual stand persistence check at emergence and periodic soil tests are important to ensure stand longevity. Success of native warm-season grass management under reduced fertility inputs may provide an alternative forage system for livestock operators.

Given all of these benefits, why are native warm-season grasses not more widely prevalent in the Southeast? Establishment of native grasses is slow and requires mindful, prior planning to be successful. Identifying a relatively grass- and weed-free area prior to establishment is needed to reduce competition during the establishment period. There are also relatively few herbicides that can be used to control competition during this specific time frame.

Native grasses exhibit a strong level of dormancy, which means they are slow to emerge and establish. However, once these forages have a foothold, their production potential is set in progression. Some other reasons why native grasses are not more widely used may be because they require more attention to grazing management than some of our other more commonly used perennial grasses. Native grasses in the present study were grazed to a target height of 15 inches. That is vastly different than grazing to a 3- to 4-inch residual height for other warm-season perennial grasses.

There is an increasing body of work to demonstrate the effectiveness of rotational grazing of native warm-season grasses in the Southeast and to identify practices for continuous stocking to keep forage yield and quality in check. With continued work to refine our grazing recommendations, this may promote greater use of this system in the region.

The good, bad, and ugly of spring grass Previous