Another record-high price for alfalfa

The September average alfalfa hay price rose by $2 per ton, according to USDA’s Agricultural Prices report. For hay other than alfalfa, the average price dropped by $9 per ton.

The average price of alfalfa during September was $275 per ton, which was $63 per ton above a year ago and set another record-high monthly price. 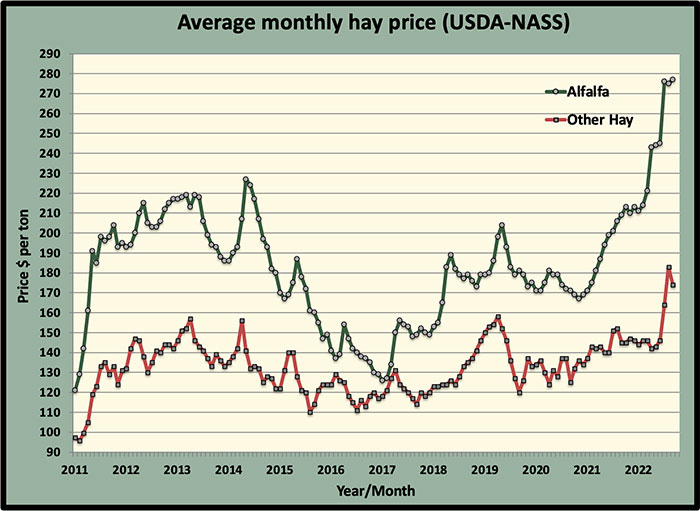 Eight states issued double-digit gains in their average alfalfa hay price from August to September. Iowa led this group with its plus $30 per ton jump. It was followed by Oregon and Wisconsin, both with $20 per ton bumps. Others in the double-digit gain group included Kansas (+$12), South Dakota (+$12), Oklahoma (+$11), and Colorado and New York, both up $10 per ton.

Double-digit declines in alfalfa hay price during September occurred in two states. North Dakota and Minnesota were both down by $10 per ton.

The highest average alfalfa hay price was reported in California at $350 per ton. Washington checked in at $335 while Oregon and Arizona were at $330.

The Midwestern states continue to post the cheapest average alfalfa hay prices. North Dakota was lowest at $140 per ton. It was followed by Wisconsin at $161.

Keep in mind that the USDA average prices account for all qualities and bale types of hay sold. Also, the final U.S. estimate is a volume-weighted average rather than a simple average of state values. Those states with the most volume sales will impact the final U.S. dollar value more than those states with fewer sales.

The USDA also tracks the prices of Supreme and Premium quality alfalfa in the major dairy states and determines an average price from the five top milk-producing states (California, Idaho, New York, Texas, and Wisconsin). This data is used to determine feed prices in the Dairy Margin Coverage (DMC) program. 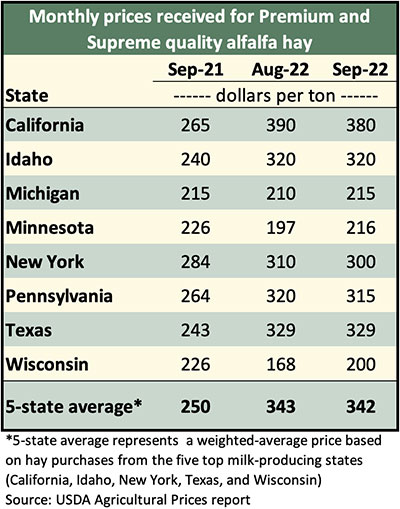 The September average price of other hay (mostly grass) dropped by $9 per ton to $174, which followed a $19 boost in August and is $19 per ton higher than one year ago.

The highest September prices for hay other than alfalfa were reported in Nevada ($310 per ton) and Washington ($300).

North Dakota had the lowest reported other hay average price at $85 per ton. It was followed by Wisconsin at $96. 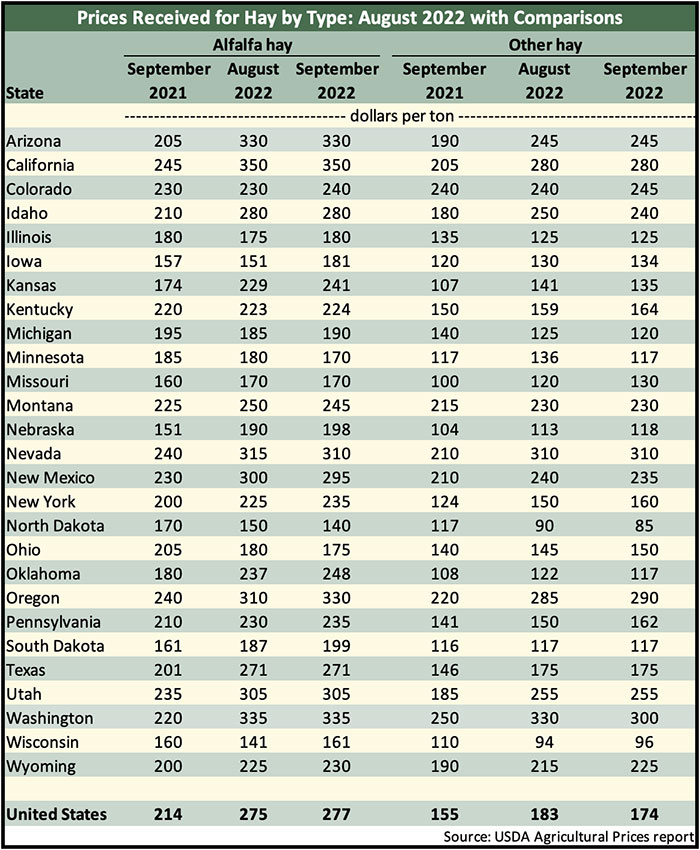