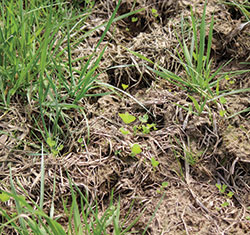 Mineral salt, the digestive process and seed survival in feces were all among the factors that made fed-seed establishment a low-success practice during the first year of this North Carolina State research trial.
Improving or maintaining the forage quality of pastures can be accomplished in a variety of ways. A common method is to introduce a legume to the pasture species mix. In addition to improved quality, such a practice may reduce the need for nitrogen fertilizer and/or dilute the effects of endophyte-infected tall fescue. The most common means of establishing legumes such as red clover is to use a no-till drill or simply broadcast seed (frost seed) in mid-winter or early spring.

Some livestock producers have tried to feed red clover seed to their ruminant livestock in hopes that it would pass through the digestive tract and establish by feces deposition. This has been done as a matter of convenience, time-savings or simply because the terrain was too rough for machine operations.

Researchers at North Carolina State University designed a study to test the practice of red clover establishment by feeding seed to beef cattle and then compared it to broadcast establishment. They also contrasted the effects of coated (with inoculant and lime) versus uncoated seed. Paige Kennedy, a NCSU graduate student who leads the investigation, reported first-year results from the study at the American Forage and Grassland Conference in Baton Rouge, La.

The trial was set up to feed red clover seed along with free-choice mineral. To test the effect of the high-salt mineral on seed viability, germination was tested following 2, 7, 14, 28 and 56 days of seed contact with the mineral. After 14 days, coated seed viability declined significantly to only 70 percent and there was 0 percent viability at 28 days of contact. Uncoated seeds remained completely viable until 28 days of contact, when germination percent dropped to near 50 percent. Seed viability dropped to 7 percent at 56 days of contact. The researchers surmised that moisture would accelerate seed damage over time.

A second source of potential seed damage was also tested; that of the animal’s digestive tract, which is acidic, populated with microorganisms and generates heat. Fecal samples were taken from animals that consumed the mineral-seed mix and seed germination was measured. Seeds passing through the digestive tract ranged in viability from 0 to 30 percent, regardless of the presence of coating.

Finally, the researchers evaluated the ability of fed seed to establish after being deposited on the soil surface in the feces. Results from this component of the study showed that seedlings were not able to effectively establish unless the fecal pats were spread out by dragging.

The overall success of red clover establishment after feeding was compared to broadcast frost seeding. A mineral-seed mixture was made available to cattle grazing across 16 acres. Comparison plots within the area were frost seeded at a rate of 10 pounds per acre for uncoated seeds and 13 pounds per acre for coated seeds (same number of actual seeds were broadcast for the two treatments). The number of seedlings established for both seed types was about 10 per square foot. For the fed-seed system, less than one plant per square foot was established.

The experiment will be repeated in 2016, but initial results indicate that feeding red clover seed to cattle as a means of establishment is highly inefficient and should probably only be considered when broadcast seeding is not possible.

This article appeared in the March 2016 issue of Hay & Forage Grower on page 22.

The greatest grazing sin Next