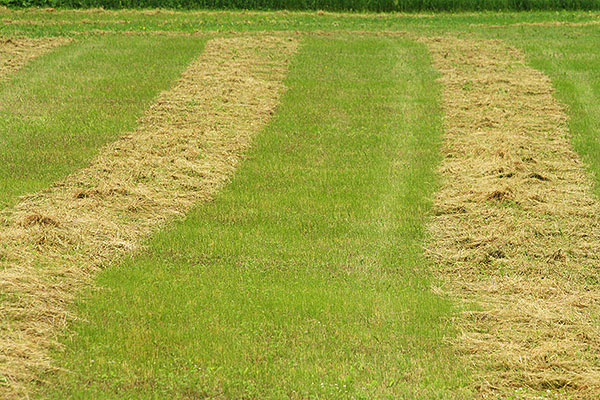 That was the response I got not too long ago as I called to confirm a morning farm visit.

The hay grower had cut early to capture the quality premiums that go along with Supreme quality hay in today’s market environment. The alfalfa had been dried, raked, and was ready to bale. Then a freak thunderstorm hit the area that generally doesn’t get much summer rain, freak or otherwise. The 4,000 acres represented 80 percent of his total first-cut production.

Rain that occurs during the wilting process is rarely welcomed because of the forage yield and quality losses that virtually all haymakers experience at some point. It’s also a phenomenon that is well researched.

Rain-induced losses to wilting forage can cause:

• Leaching of soluble carbohydrates and certain minerals out of the forage. The result is lower quality, but it also may affect fermentation qualities of the forage if it is being chopped for high-moisture storage.

• Leaf shattering in the case of legumes. If not directly from the rain, often from the additional mechanical manipulation (raking and tedding) that is needed to reboot the drying process.

• Additional microbial activity that metabolizes soluble carbohydrates. In addition to lower energy content, this also raises the risk for mold and mycotoxins development.

• Color bleaching, which may lower the product’s market value.

Yield washed away
Though not always as noticeable as forage quality, rainfall during the wilting process can cut potential yields. When the rain does occur, how much, duration, and intensity all play a role in determining the extent of actual dry matter yield loss.

There are three primary mechanisms at play. First, rain may prolong plant respiration, which chews up valuable carbohydrates (sugars). If the forage is wilted below about 50 percent, which is when respiration normally all but ceases, research has shown that rewetting can cause plant respiration to reactivate, furthering the loss of nonstructural carbohydrates.

Rain can also simply cause the leaching of carbohydrates out of plant tissues. The same occurs with some minerals such as potassium. Finally, dry matter losses occur simply from the loss of leaves. This is more of a mechanical issue related to further windrow or swath manipulation than one in which raindrops actually knock leaves off the plant.

In some early Wisconsin research, dry matter losses from rained-on hay totaled 22 percent when alfalfa was exposed to a 1-inch rain after one day of wilting. In Michigan, several studies have been conducted to document alfalfa yield losses. In one of these trials, maximum losses were reported at 34 percent. In a second trial, rainfall amount was kept constant at 0.7 inch but spread over periods from one to seven hours. The dry matter yield losses ranged from 6 to 12 percent with the greatest loss occurring when the rain was spread over the longer duration.

Grass hay is also subject to loss, though leaf shatter is less of an issue. Researchers in Arkansas evaluated rained-on orchardgrass dry matter losses. In one treatment, the wilted hay was at 67 percent moisture and for another at 15 percent. Simulated rainfall was applied in 0.5-inch increments with 0 to 3 inches being applied. For the wetter forage, dry matter losses were all under 2 percent (even for 3 inches). However, for the 15 percent moisture orchardgrass, dry matter loss ranged from about 6 percent (0.5 inch) to over 10 percent (3 inches).

A quality killer
When the forage analysis of rained-on hay comes back from the lab, that’s when the reality of the carnage takes place — potentially excellent quality forage has been transposed to cordwood. Like yield loss, the extent of the damage depends on rainfall amount, duration, intensity, and the forage moisture when the rainfall occurs.

With the loss of soluble carbohydrates through respiration and leaching, the percentage of structural carbohydrates (fiber) changes, and generally not in the desired direction. This means a higher percentage of neutral detergent fiber (NDF), lower fiber digestibility (NDFD), more ash, and a lower relative forage quality (RFQ).

In some recent Wisconsin research, NDF bumped up about 4 or 5 percentage units for alfalfa that received a 1.1-inch rainfall and 12 to 13 percentage units for a more severe 1.9 inch-wetting over an extended eight-day time period of wet weather. Often, when rainfall amounts are moderate, it is not unusual to see a rise in crude protein (CP) percent because its components are not lost to the same extent as nonstructural carbohydrates. In the case of alfalfa, the extent of leaf loss will play a role as to the final CP concentration.

Where forage is being chopped for high-moisture feed, rainfall during wilting may negate its potential fermentation qualities. This is especially true for alfalfa that has been exposed to multiple rain events over an extended period; in such cases, there are greater amounts of sugars and starches lost that act as substrate for lactic acid-producing bacteria. In such cases, a bacterial inoculant is highly recommended. Finally, rain-damaged forages are more prone to clostridial fermentations that yield ammonia and butyric acid as end products.

The internet is your friend
As long as hay continues to be made, there will always be instances of rained-on wilted forage. That said, the days of relying solely on a bum knee for a weather prognosis are gone. These days, there are multiple websites that provide weather and ever-improving short-term forecasts. Yes, that freak thunderstorm will continue to haunt the serious haymaker, but diligent smartphone weather watching can save both yield and forage quality.