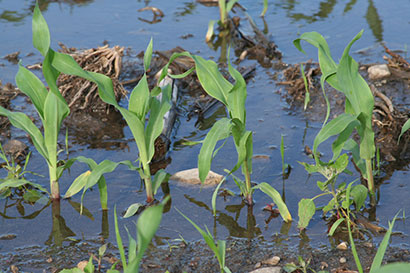 Many regions of the U.S. (sans West Coast) have received copious amounts of rain following the start of what was a pretty ideal early planting season. As such, conditions in many of our corn silage producing areas might be summarized as follows:

Though the national focus is always on grain bushels lost during extreme weather events, corn silage yields may and often are also reduced because of several different factors. These include: nitrogen loss, stand loss, and late or replanted fields.

Both stover and grain biomass yield suffer when corn lacks needed nitrogen. Frequent and/or heavy rain events perhaps have their greatest impact on corn silage yield because of the loss of nitrogen that occurs from denitrification in soils that stay saturated over extended periods. Though low field areas are obvious as corn progressively turns green to yellow, nitrogen loss can occur across otherwise adequately drained soils during periods of heavy rains. Wet, saturated soils may also delay or prohibit sidedress applications of nitrogen along with weed control measures. Weeds have been shown to use significant amounts of nitrogen if they are not controlled early.

Corn only takes up about 5 percent of its total nitrogen through the V6 stage. Sometime around the V8 stage begins a rapid uptake phase that continues postflowering. Early season nitrogen losses can be rectified with additional applications as soon as soil conditions allow. There will almost always be an economic return if nitrogen is in a deficiency state. Though the corn will eventually get tall enough to hide the nitrogen deficient areas, be assured that it won't hide from the storage unit later this fall. Wet years take top-end yields out of a corn silage crop — it’s largely because of inadequate nitrogen. 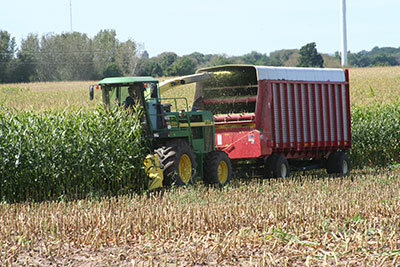 Optimum corn plant density is generally thought to be higher for silage than for grain. When areas of fields or individual plants are lost because of abnormal soil wetness, silage yield potential is reduced. Plant loss can be the result of flooding or seedling diseases that are induced by saturated soils. The degree of lost yield is directly related to the extent of stand loss.

Several corn research trials have shown maximum silage yield stand densities to be in excess of 40,000 plants per acre. Recommended planting rates are generally lower than this when seed cost, lodging potential, and the lower feed quality associated with excessively high plant densities are considered. Though replanting is often not needed where stands are still greater than 20,000 plants per acre, maximum silage yield potential is still reduced. Most university extension services provide guidelines for making replant decisions.

When excessive flooding damage has occurred, fields often need to be replanted. Reports of this occurring are more widespread in 2015 than in most years. Though replanting is sometimes the only logical and best alternative, late planting can reduce silage yield potential by up to 50 percent; this is especially true where growing season length becomes a limiting factor.

The extreme rain events of the past month in many parts of the U.S. will reduce corn silage yield potential in the same way grain yields will be reduced. If you’re in one of these areas and feed inventories look like they will be tight, the good news is that in these areas there are often willing neighbors who have corn to sell as silage rather than risk a substandard grain harvest on late-planted or replanted fields. Make plans earlier rather than later to meet your corn silage inventory needs.

Start to finish...water key to great silage Next