We briefly touched on the twin row topic three years ago in a column on corn plant populations and row widths (May 10, 2011, on page 344) but decided to revisit the subject in more detail. The vast majority of corn acres in North America are still planted in 30-inch rows, with narrow-row spacing accounting for less than 5 percent of acres and twin row comprising less than 1 percent of all corn plantings.

Twin row has emerged as an approach to boost yields without high equipment-switching costs given twin-row compatibility with postemergence herbicide or side-dress nitrogen applications and existing combine heads. All you need to do is search the internet or YouTube and you will read grower and planter manufacturer (examples include Monosem, Great Plains, Kinze, CaseIH, John Deere) testimonials proclaiming the ability of twin-row corn to raise grain yields (roughly 2 to 9 percent). This results from more equidistant plant spacing, greater root mass, improved light interception, larger stalk diameter, faster canopy cover and better air movement through the field.

When considering plant spacing, the distance between plants in a twinrow system is less than in 15-inch rows but greater than in 20-inch rows (Figure 1). If the goal is maximum distance between plants, twin rows should have an advantage over 20-inch rows, but not 15-inch rows. Silage growers with row-independent chopper heads have a distinct advantage other than the challenge of mechanical damage when applying herbicide or nitrogen. Some twin-row planters also have the ability to plant in a precise alternating diamond (staggering) pattern (Figure 2), but controlled research to date has not shown a significant yield difference between these twin-row patterns. Professor Joe Lauer, University of Wisconsin corn extension agronomist, has summarized both university and industry twin-row research trials. In 37 university locations between 1995 and 2005, twin rows yielded an average of 2.4 bushels per acre less than 30-inch rows, with differences ranging from -9 to +5 bushels per acre.

Monsanto trials in 2009 indicated about a 3 bushel advantage (1.5 percent) when populations exceeded 38,000 plants per acre (PPA); however, statistics were not presented on their dataset. Pioneer twinrow research conducted in 2010 on 179 paired comparisons across 31 locations showed no statistical grain yield advantage compared to 30-inch rows.

One of the reasons for less-than exciting grain yield gains may be explained by the findings at the University of Illinois. Their 2006 research showed that light interception for twin and 15-inch rows was much greater during vegetative growth, but the 30-inch row treatment caught up by the reproductive (R2), grain-fill stage resulting in statistically greater grain yield in the 30-inch compared to either 15-inch or twin-row spacing.

Twin-row silage data is much scarcer than grain data. Silage research from Cornell University conducted in 2006 did show a statistically significant 0.6 ton DM (dry matter) yield advantage to twin rows over 30-inch spacing, but 15-inch rows outyielded twin rows by an additional 0.5 ton DM per acre for the two hybrids planted in the study. This may be the result of the distance between plants in a twin-row system being less than in 15-inch rows.

The Cornell research did not indicate any significant change in silage digestibility, suggesting that any minor gains in grain yield may be diluted by taller or larger stalk diameter plants. Despite testimonial claims, published research has not shown an increase in stalk diameter or reduced lodging for twin-row spacing.

The Midwest Forage Association funded on-farm comparisons between 30-inch and twin-row silage plots in east central Wisconsin in 2011 (three locations) and 2012 (one location). In 2011, the twin-row plots averaged only 0.1 ton more dry matter silage yield, which was not statistically significant. In 2012 (a drought year), the 30-inch and twin-row yields were exactly the same at 5.9 tons dry matter per acre. 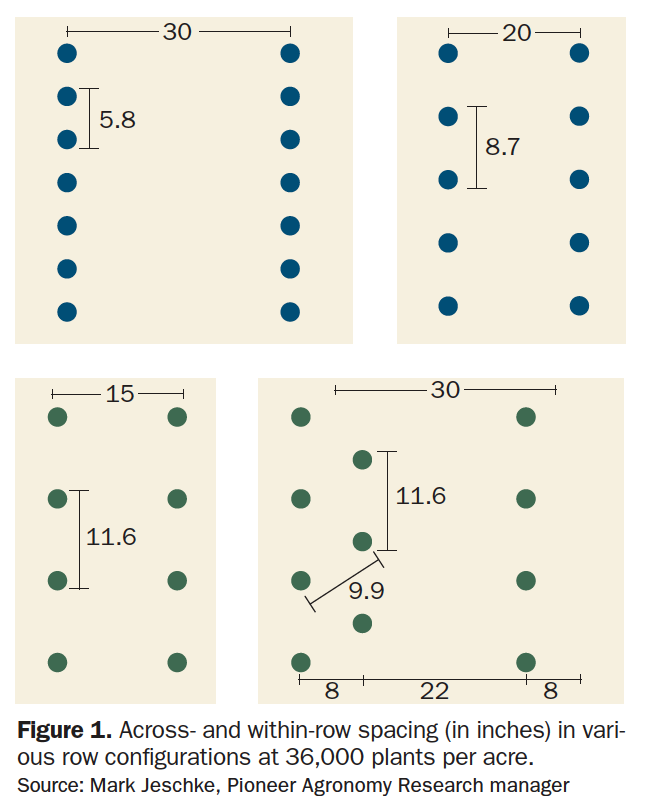 Do some hybrids respond better to twin-row planting? Pioneer research has shown no statistical hybrid by row spacing interaction observed among 14 commercial hybrids planted across multiple locations in 2010, suggesting that growers should select hybrids as they normally do and rely on seed company recommendations for optimum plant populations. It is interesting to read popular press articles about growers using twinrow planters to boost populations from 28,000 to 32,000 PPA. Research indicates that growers do not need to switch to twin or narrow rows to increase seeding rates to reasonable levels (36,000 to 38,000 PPA).

Growers should be cautioned not to rely on ear flex scores when considering planting populations. Ear flex refers to the ability of a plant to extend ear size as plant density is reduced or as growing conditions improve. Many seed companies have abandoned evaluating ear flex and advise growers to rely on actual population recommendations from field trials planted at upwards of 45,000 PPA.

Ear flex scores have their primary utility in deciding if a hybrid has the ability to deliver higher yields under possible replant situations such as emergence problems or hail which reduces populations to less than 12,000 PPA.

As with many agronomic management decisions facing growers trying to stay on the cutting edge of yield performance, there is no clear-cut answer as to the economic advantage of twin-row corn grain or silage. It is also difficult to translate grain-based research from moderate- to high-yielding environments in the I-States (Iowa, Illinois, Indiana) to grain and silage growers in more northern latitudes limited in solar radiation and/ or lacking for fertility or moisture.

In general, rigorous research studies to date suggest that twin rows do not offer a statistical silage or grain yield advantage (or disadvantage) either in high-yielding or challenging growing environments. The most promising place for possible twin-row implementation appears to be in the northern and eastern Corn Belts where narrow-row corn has clearly shown a yield advantage. 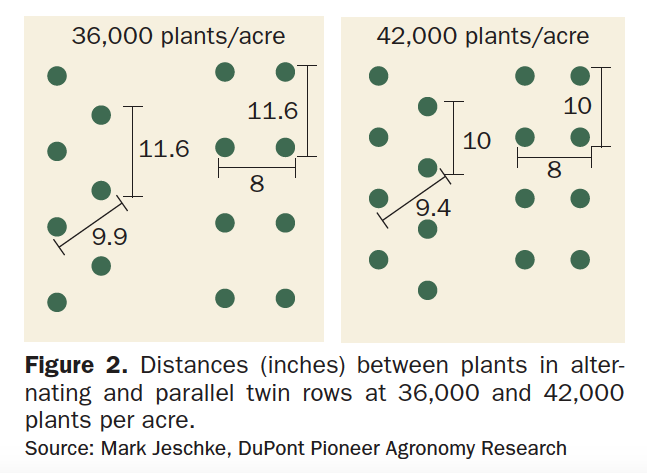 Like grain, corn silage yield suffers from saturated soils Next

The current state of kernel processing

A corn crop with multiple personalities