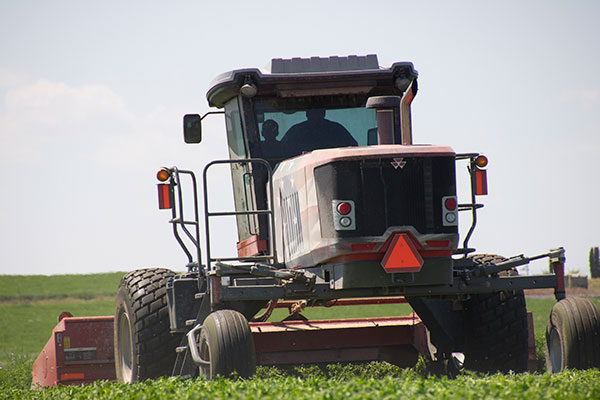 With the opening weekend of the college football season now behind us, alfalfa breaks out a new game plan of its own — one of conservative offense and a tough defense.

As temperatures cool, alfalfa plants of the dormant ilk begin to partition resources toward those things that will enhance winter survival. Rapid and abundant top growth becomes secondary, though still important to maintain a photosynthetic factory. Moving to the top of the priority list is root carbohydrate (starch) and protein storage.

Most alfalfa growers know the cyclic nature of root carbohydrate concentrations better than they can rattle off their children’s birthdays. It’s almost a right of passage before being sold seed. During the growing season, root carbohydrate reserves are used to fuel regrowth following a cutting; in the fall, the accumulated stored starch is needed to both maintain the plant through winter and initiate new spring growth.

It was the need for adequate fall-stored root reserves that prompted the establishment of the long-held “critical fall period” — the agronomic equivalent of a “no-fly zone,” only with mower-conditioners rather than airplanes. The thinking was that alfalfa needed four to six weeks before a killing freeze to build root reserves. Cutting during this period would result in the plant using the stored reserves for regrowth but without enough growing season left to replenish adequate root carbohydrates for overwintering and spring growth.

The recommendation held sound for many years and was easily proven in multiple past research trials. Generally, if the no-cut rule was broken, the alfalfa field paid the price. One spring photo at an extension meeting of a side-by-side plot (fall cut versus no fall cut) was all it took to make people believers.

That was then, this is now

All of the fall-cutting considerations that were valid 30 years ago are still valid today. If alfalfa is cut during the critical fall period, it will be at a higher risk for winter injury. However, I believe that risk is much less than it was 30 years ago. Here’s why.

Simply put, alfalfa varieties are better today. The link between fall dormancy and winterhardiness has largely been broken, meaning that the photosynthetic factory gets built faster after cutting. Furthermore, today’s varieties are selected by imposing aggressive harvest regimes and by cutting plants at all the wrong times (including fall). If you use improved genetics, your chances for winterkill will be less today than years gone by.

The next reason is more about the movement of the critical fall period than its elimination. Let’s be honest — growing seasons are lengthening. Both weather data and the USDA Plant Hardiness Zone maps reflect this change. Today’s third week in September was yesteryear’s second week in September. On average, killing frosts and freezes are occurring later. The risk for fall cutting doesn’t actually pertain to calendar date, but rather to growing degree units before a killing freeze of about 24°F. Critical fall periods today start and end later than they did 30 years ago.

Finally, there is simply the anecdotal evidence that farmers can be found cutting alfalfa on just about any day during the month of September. A drive around the countryside easily verifies this fact. Perhaps the stand life is shortened, or there is less yield the next year, but the practice is clearly not the death wish that it once was.

Still, there is risk

Less risk for fall cutting doesn’t equate to no risk. The basic physiologic changes that occur in the alfalfa plant during fall haven’t changed. Plant breeders have perhaps found genetics that winterize better and faster, or withstand the rigors of winter with less in the tank. Whatever the case, alfalfa plants still prepare for winter as they always have.

Even with improved varieties and changing climatic patterns, there will still be years with early frosts and freezes, open and frigid winters, and springs filled with ice and extreme temperature variation. Mother Nature always trumps genetics and weather risk will always be in play.

Also to be considered, as has always been the case, are previous cutting schedules, soil fertility, and pest management. Stands that have been subjected to intensive cutting regimes, that lack soil fertility, or have been stressed by diseases and/or insects will be less likely to overcome the rigors of a fall cut. Older stands also are more vulnerable to winter injury from fall cutting than younger stands.

Next week: A look at the late fall cut