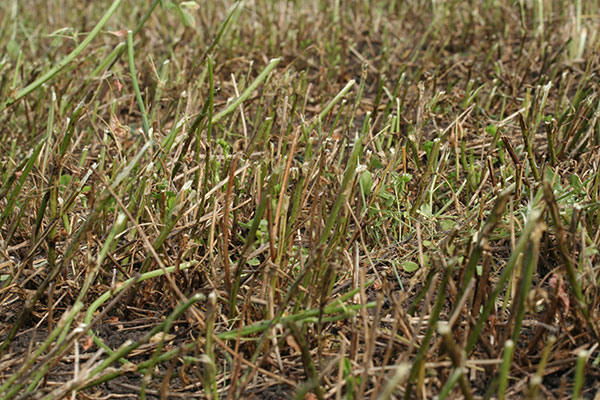 Cutting alfalfa after temperatures have reached the point that regrowth will no longer occur makes for a different discussion than cutting during the period of four to six weeks before first frost. In the latter case, the hope — and it’s only a hope — is for adequate regrowth prior to the onset of cold temperatures that will cease growth.

For a late-fall cut, alfalfa plants have accumulated carbohydrate and protein reserves in the taproot through the fall, and it comes at a time when there is no risk of those reserves being depleted by regrowth. Research has historically shown that this approach is safer from a winter injury or kill standpoint than cutting earlier in the fall when regrowth is still possible.

In my experience, there are three primary reasons why farmers feel the need to cut alfalfa late in the fall. They are:

1) Don’t want to leave money on the table.

In the case where favorable weather has contributed to significant fall growth, some farmers can’t bear to leave an apparent high-yielding, high-quality crop out in the field.

The reality is that late-fall alfalfa is rarely high yielding. Yes, the crop can sometimes be tall, but the stems are usually small and there are fewer of them. What looks like a high-yield crop usually shrinks to nearly nothing when put into a swath or windrow. Often a late-fall cut yields 0.5 ton per acre of dry matter or less, which makes for expensive forage when harvest costs are considered.

2) It will smother out if not cut.

Sometimes farmers are concerned that the fall growth will smother and kill the stand over winter. This simply does not happen with a legume such as alfalfa. Rather, leaves freeze and eventually drop off the plant. Stems, for the most part, stand erect. The old, fall aftermath growth (old stems) may impact forage quality of the next year’s first cutting, but if harvested early enough the reduction in quality is minimal.

Following a year of severe winterkill or drought, sometimes alfalfa is cut in late fall simply to meet a need for additional feed.

Though the risk to cut alfalfa in the late fall has proven to be less than when regrowth potential is high, the practice is not without some downside. Already mentioned is the fact that yields are typically low; they will be even lower if the cutting height is raised as is often recommended for a late-fall cut.

Also to be considered is the fact that fields cut in the late fall generally break dormancy later during the following spring and have a lower first-cut yield compared to not being fall cut. In my experience, the gain in fall yield is about equal to the loss in spring yield. This is not to say that the fields are winter injured, but rather less vigorous come spring.

Finally, consider the condition of the alfalfa stand before taking a late-fall cut. If it’s already been stressed by intensive cutting, pest issues, or low soil fertility, stress from an additional cutting will likely accelerate stand decline.

All factors considered, the need for feed prior to the next year’s harvest may be the only good reason to cut alfalfa in late fall.

Is an alfalfa futures contract in your future? Next