The oddity of forage nitrates 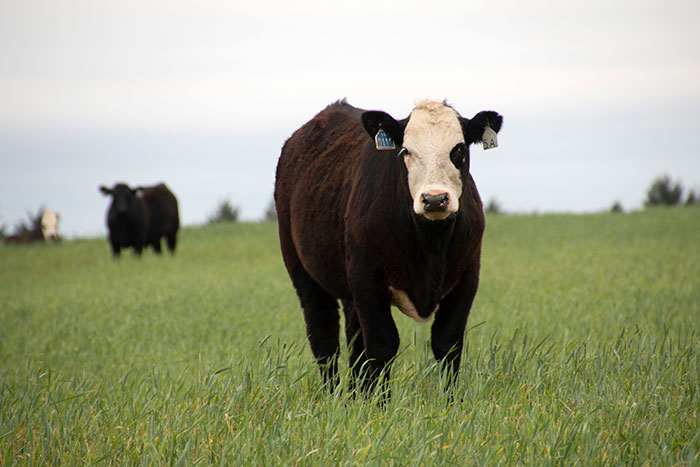 With the onset of popularity for seeding annual crops for summer, fall, or winter grazing, forage nitrate concentration discussions have resurfaced in a big way.

Mary Drewnoski, an extension beef systems specialist with the University of Nebraska-Lincoln, recently noted that they had been testing their research plots for nitrates on a routine basis. The samples, which consisted of either a mixture of oats, turnips, and radish, or oats alone, often had excessive nitrate concentrations. Here’s the kicker: Even though nitrate levels were extremely high, no signs of toxicity in the cattle grazing them were observed. Drewnoski is by no means alone in this observation. I have heard similar stories from other researchers and farmers in various parts of the United States. Grazing is less risky I recall listening to a presentation given a few years ago by Jaymelynn Farney, Kansas State’s beef cattle specialist. She related her experience during the dreadful 2012 drought year when cereal grain and brassica pastures far exceeded 9,000 parts per million of nitrates, which is the level that should begin to make you lose some sleep. “There should have been cows dying all the way through November,” Farney said. “It didn’t happen, nor have I heard any reports of cattle ever dying on wheat pasture.” Drewnoski is blunt about the issue: “The specific level at which nitrates become risky to cattle in grazed forages is unknown.” We do know that toxic nitrate level threshold in growing, green forage is higher than in cured, dry hay. Farney pointed to a research summary from the Netherlands that summarized 40 feeding trials. It showed that green forages probably release nitrate into the rumen at a much slower rate than dry hay. Further, cows can handle the higher nitrate fresh forage because it’s consumed over a longer duration. Drewnoski offers some other reasons why high-nitrate forage might be less risky for grazing cattle. She noted that grazing cattle often tend to be more selective and do not graze the entire field close to the ground where nitrate concentrations are the highest. The Nebraska extension specialist also suggested that cattle consuming high-energy diets can handle more nitrates than those on low-energy diets, noting that many annual crop mixtures such as brassicas and immature grasses are very high energy. Keep your guard up High-nitrate forages that are made into hay hold a higher risk for nitrate issues. In fact, the old timers used to refer to nitrate poisoning as “oat hay poisoning.” High-nitrate forages that are ensiled are generally, but not always, safe. This is because a large portion of the forage nitrates in ensiled forage is driven off as “silo gas” during fermentation. The danger here is often with humans rather than the cattle. Regardless of utilization, it’s always a good idea to test forages suspected of having high-nitrate concentrations. The risk is always greater under drought conditions or where high nitrogen levels exist in the soil. For grazing cattle, Drewnoski offered up the following suggestions: 1. Make sure cattle are full before putting them on fields. Regardless of the nitrate level, fill cattle up with hay before turn-out. 2. Use lower risk cattle, if possible. The group with the greatest risk of negative consequences from high-nitrate forages is pregnant cows, as abortion can result. Open cows are the best option followed by growing calves (stockers or developing replacement heifers before breeding). 3.Gradual adaptation is a key management strategy to minimize risk when using high-nitrate forages. Losses from nitrate toxicity will be much greater in cattle not adapted to nitrate consumption. Start by grazing the lowest nitrate fields and then work up to the highest. 4. Graze higher nitrogen fields lightly to allow animals to selectively graze plant parts that are lower in nitrate concentration. 5. Consider grain supplementation while adapting cattle to high-nitrate, lower-quality forages such as mature sorghum-sudangrass hybrids or pearl millet. This will supply energy for rumen microbes to convert nitrate into bacterial protein, and minimizes the intermediate nitrite production. Brassicas, such as turnips and radishes, are highly digestible and may provide enough energy to allow for adequate microbial protein synthesis. Grain feeding may be of limited benefit for high-quality annual forages.

Pasture mycotoxins? Yes, there are Previous