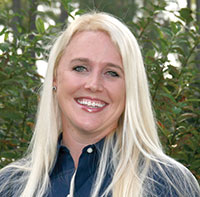 Jennifer Tucker
$15,500
As alfalfa has slowly been reintroduced to Southern fields this past decade — this time grown with bermudagrass — the need for new alfalfa research has also grown. Southern researchers and farmers have been questioning whether alfalfa management standards created largely in Northern climates are best for the South, where the legume is often grown on sandy soils and is harvested up to seven times a season.

University of Georgia Animal Scientist Jennifer Tucker and colleagues from neighboring states are working to get answers. A recent Alfalfa Checkoff project she oversaw tested whether potassium could be applied to pure alfalfa at lower rates than the general recommendation of 300 units per acre and still maintain stand persistence and yield. Since 2016, Tucker has been researching how forage quality and grazing management can positively affect beef nutrition and production in the Southeast.

Tucker had noted that potassium deficiency was the culprit “nine times out of 10” when farmers asked her to check problem stands with thinning bermudagrass and sickly alfalfa. “Producers like to cut costs at all opportunities, and potash tends to be one of those things they cut,” she added. “You don’t see the effect until it’s already too late — you’ve lost a portion of your stand or your yield is significantly impacted. So, we decided to look into potassium deficiency and potassium rates.”

The project piggy-backed on a two-year National Institute for Food and Agriculture (NIFA) grant allowing Tucker to study above-ground effects of potassium and harvest effects on alfalfa yield, quality, and stand persistence. Four pure alfalfa plots, divided according to harvest intervals of bud stage, 10% bloom, 30% bloom, and 50% bloom, were subdivided. Potassium was applied to each subplot at one of five different rates (0, 60, 90, 120, and 150 pounds per acre), which were split-applied three times during the season.

After the last harvest of the NIFA study, Tucker and then-graduate student Britta Thinguldstad dug up roots to complete the Checkoff research. They evaluated management impacts by comparing the amount of root carbohydrates in them as well as stand vitality and yield. The lower potassium rates did not affect the root carbohydrate analyses, but harvest timing did affect starch and nonstructural carbohydrates. Her conclusion: The standard higher potassium rates and harvesting at 10% bloom should be maintained in the Southern Coastal Plains.

“It was really a confirmation and pinpointed that 10% bloom stage is definitely the harvest target we should be looking at. And you can see that it does not pay to cut corners (when applying potassium),” Tucker said.

“If we had run this out for a third year, the stand would then be in its fifth year, and plants would have gotten older and more depleted from not having enough available potassium across the season. We probably would have seen more pronounced differences than what we were able to catch,” she added.

The subsoil was showing depletions. “When you get a foot down, that’s where we see our greatest challenges in our sandy soils — the potassium leaches out. So, I think if we had another year that would have given us the prominent results that we were expecting to see,” Tucker explained. “There is a lot of data that shows potash has an effect on long-term stand persistence and yield.”

Tucker is currently working with colleagues at Auburn University, the University of Tennessee, and the University of Florida to research ways their farmers can integrate alfalfa in various cropping or grazing systems. The integrated system of bermudagrass and alfalfa fits well for beef producers.

“The supreme quality of alfalfa significantly improves the moderate quality of a bermudagrass stand, extends the use of a single unit of land whether only for summer or to encompass much of the year, and it still meets or exceeds the dietary needs of beef animals,” Tucker said. “We’ve got a stigma that alfalfa is just for dairy animals and purebred horses. But it fits beef cattle operations, and, when used effectively, you don’t have to add a lot of supplements or other feed.”

With newer, resistant alfalfa varieties and effective ways to control alfalfa weevil — part of the reason alfalfa “disappeared” from Southern fields in the 1960s and 1970s — alfalfa is being successfully grown in the South.