Are greens good for you?

Denman is a research professional at the University of Georgia and Hancock is Georgia’s extension forage specialist. 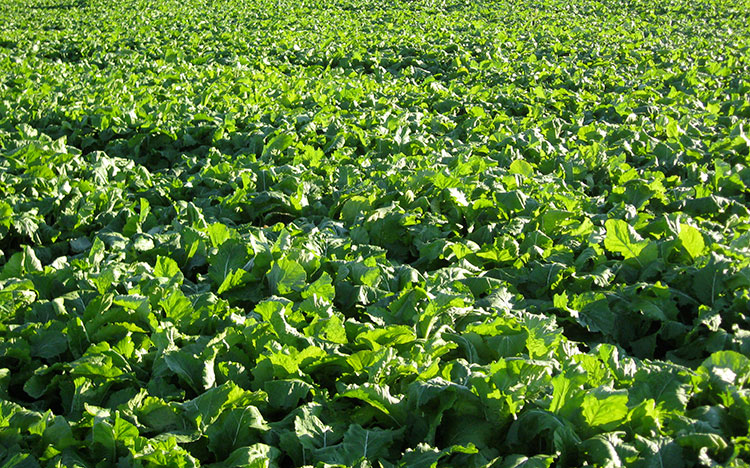 Not everyone has had the blessing of having a Southern momma (bless their hearts!). Those of us who did know that one of their favorite suppertime sayings is “Eat your greens! They’re good for you.”

In the past few years, many have been proclaiming the benefits of greens for our pastures, as well.

Turnips, kale, swedes, and several hybrids of these members of the Brassica genus have the potential to produce large amounts of forage. Even after one considers that these are often more than 80 percent water, the yield produced by the forage-type brassicas can be greater than 4,000 dry pounds per acre within a few weeks of planting. 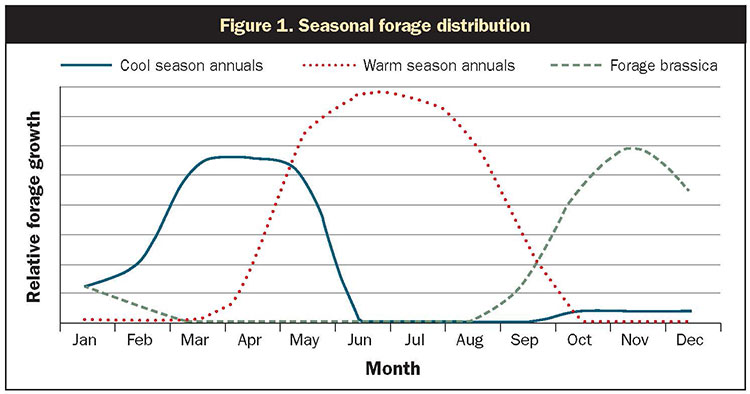 In the Southeast, forage brassicas are often planted in late summer or early fall to provide forage that fills the lull in forage production in mid to late fall of the year. If planted between August 15 and September 15, the hybrid forage turnips can often be grazed within 60 to 75 days after planting.

In addition to producing high yields, forage brassicas have high nutritive value. Research and on-farm observations have shown brassicas to be 18 percent or more crude protein (CP) and have levels of total digestible nutrients (TDN) equal to or greater than 70 percent. In fact, it may be too good.

The combination of a forage with high digestibility and high-moisture content results in a fast passage rate through the digestive tract. Consequently, ensure that brassicas are not more than 75 percent of the animal’s diet.

Livestock will often self-select more fibrous forage to pair with the brassicas to help regulate their digestive system. Feeding a high-fiber forage such as dry hay with brassicas will slow down the passage rate and enhance the absorption of nutrients.

Ironically, livestock that have never been fed forage brassicas may take some time to accept them. Grazing behavior and selectivity is learned from their mothers, so livestock may need to be introduced to the brassica a little at a time.

For the most efficient use of brassicas, it is best to utilize a strip or forward grazing system that allows livestock to only access small portions of the pasture at a time. This gives them a chance to “taste test” the forage, but also helps prevent the brassicas from being trampled.

Brassica seeds are very small and should be planted at a rate of 1 to 3 pounds per acre. Because the seeds are so small, they will germinate quickly, as long as enough sunlight reaches the soil surface. This makes it imperative that brassicas are planted into either a prepared seedbed or no-till drilled into dedicated annual pastures that have been terminated and have a minimal amount of residue. Brassicas do not establish well when interseeded into perennial species. 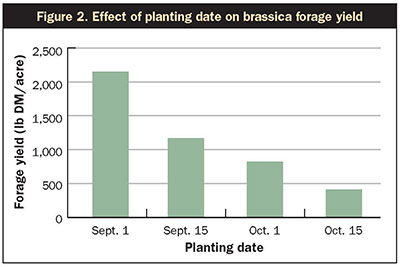 To further understand the establishment challenges of brassicas, especially in the Southeast, a research trial was conducted to evaluate the effects of planting date and land preparation strategies. The results of the study concluded that the combination of planting brassicas in the late summer (September 1 to September 15) into either a prepared seedbed or land that has been physically burned will produce the highest forage yields (Figure 2).

Figure 3 represents yield results from only the September 1 planting date. Plots that were conventionally tilled (CT) produced the highest forage yields followed by no-till with physical burning (NB). The no-till with close mowing and no-till with 12 inches of residue remaining (NR) had the lowest forage yields. Planting later or into sites where any residue shades the furrows results in poor establishment and reduced forage yields of brassica. Brassicas can be a useful tool to have in the toolbox; they can help fill the fall forage gap and extend the grazing season. Their nutritive value makes brassicas ideal for livestock with high nutrient demands such as lactating beef cattle or stocker calves with target gains of 2.5 pounds per day. To mitigate this, supplement brassicas with a high-fiber roughage source such as a low-quality hay.

Plant brassicas in the late summer and into as little residue as possible.

This article appeared in the August/September 2018 issue of Hay & Forage Grower on pages 24 and 25.