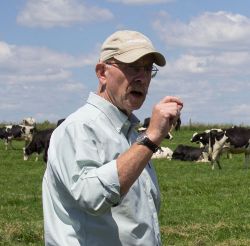 Mike Rankin
If you’re like me, there’s still a good part of each day that is spent thinking. Just the other day, I was thinking about how many great ideas humanity has lost because, rather than thinking, time was being spent perusing a cell phone screen.

Fortunately, there are still those people not surgically attached to their phones and ample driving time to keep our think tank capacity functional.

Recently, while driving down the road, I was contemplating why more ballplayers don’t bunt against the shift, then frustration and a herd of cows turned my reflections to the new world of genomics and gene mapping.

I can’t help but think that we will soon be able to identify livestock, or more specifically their genes, that best fit a specific forage system. When that happens, livestock selection will be based in part by the forages being fed.

We already have evidence that individual cattle utilize feed differently. In other words, given the same amount and type of feed, some animals will produce more milk or gain more pounds than other animals. However, scientists and producers have also demonstrated that it’s more complicated than simply good cows and not-so-good cows.

Individual cows differ in their ability to adapt and thrive when fed certain types of feeds or under different forage systems. Up until now, these cattle were found and developed through years of breeding and selection within a confined feeding and management regime.

Tom Kestell’s dairy herd in Waldo, Wis., has a rolling herd average of near 46,000 pounds of milk. According to his nutritionist, Steve Woodford, Kestell’s cows don’t fit the average model for feeding cows. They make much more milk than the “book” tells you they should given the amount and quality of feed that they eat. In other words, Kestell’s cows are genetically superior at converting forage into milk.

Chuck Backus owns and operates Quarter Circle U Ranch in the Superstition Mountains of Arizona. This is a rough, mountainous, “horse only” ranch that by most measures has no business being home to beef cattle, at least those that you want to live. Backus’ ranch consists mostly of rocks, brush, and cactus, yet he markets steers that grade 100 percent choice or better. Like Kestell, he has accomplished this feat through years of breeding and genetic selection for adapted cattle.

Toxic tall fescue has been a forage species that has held back cattle performance for years. You mitigate it, replace it, or take your lumps. Even so, we know that some cattle are less susceptible to the evils of Kentucky 31 than others. A group in Missouri, AgBotanica, thinks they have identified at least some of the genes responsible for this degree of tolerance.

Researchers at several Western universities have identified the genes that give cattle a preference for climbing hills. Such cattle are more likely to graze range areas that typically are more difficult to fully utilize.

What all of this points to, in my opinion, is reaching the day when livestock can be identified and bred for specific forage systems and feeds. Whether you hang your hat on mechanically-harvested alfalfa or corn silage, grazed tall fescue or other cool-season grasses, or range brush and forbs, there will be a way to select cattle, based on their genotype, that thrive on those feeds . . . at least that’s what I’m thinking.

This article appeared in the November 2018 issue of Grower on page 4.

Tail of the Dragon Next