Alfalfa at a crossroads 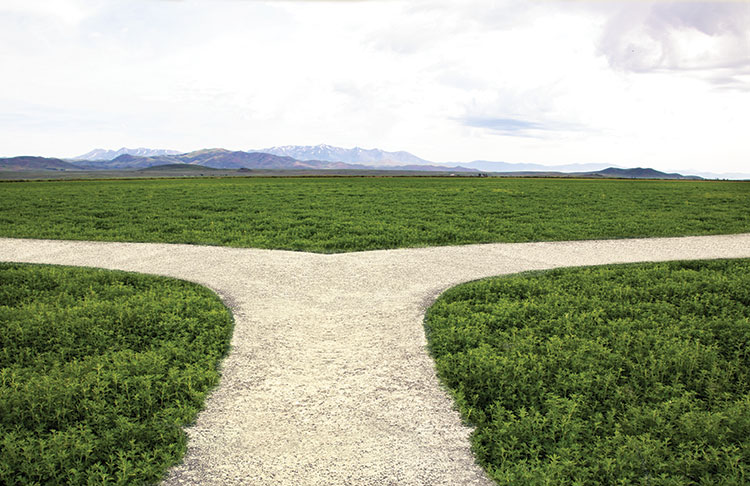 The California dairy and alfalfa industries have been a largely successful, symbiotic duo for a very long time. However, the days of spreading alfalfa bales along a bunkline and feeding cows grain mixtures in the milking parlor are long gone. The nutrients that rations of lactating dairy cows are now formulated for have risen substantially and become considerably more complex.

Indeed, most dairy rations are created by professionals using computer software programs that create least-cost rations with defined nutrient profiles based upon the nutrients and prices of all available feeds.

In less than a generation, alfalfa hay has gone from being the default forage to just one of many feeds and forages. During this period, we also witnessed the emergence of new feeds (for example, distillers dried grains or DDGS), the functional disappearance of some feeds (for example, soy hulls and beet pulp), while the availability and environmental desirability of others have proliferated (for example, almond hulls and winter cereal silages).

Is it possible to bring alfalfa hay back into the California limelight? That’s the question I’ll try to answer.

Since arriving in California in 1997, I have completed a survey of California “high-cow” rations about every four years. Data included productivity of the cows and the chemical and ingredient composition of rations. The last survey was in 2014; however, I contacted some “sentinel” dairy farms for this article in order to obtain a sense of the current situation. 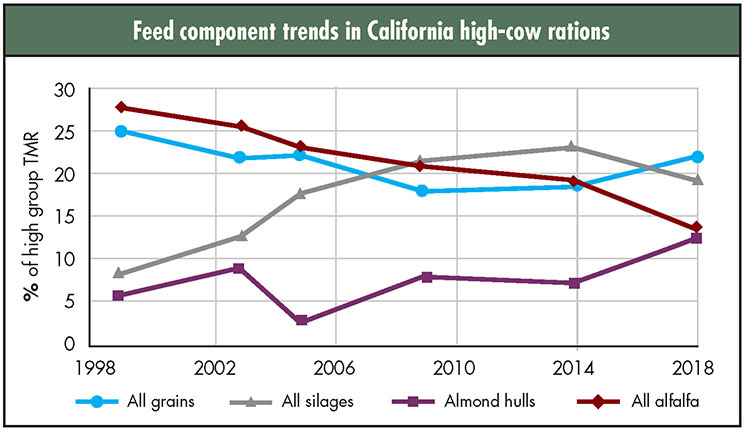 Nutrients: The nutrient levels of high-cow rations have not changed much in the past 20 years. Levels of starch, a rapidly fermented carbohydrate, have moved up and down a bit, but in general have been relatively steady at 20 percent of ration dry matter (DM). Crude protein (CP) levels, on the other hand, have declined from about 18 to about 16 percent of DM. Fat levels have trended down a bit over the years.

Ingredients: In contrast to ration nutrient levels, ingredient levels of high-cow rations have changed a great deal in the past 20 years (see graph). Between 1999 and 2014, the primary changes were the interlinked rise of nonalfalfa silages, decline in grain levels, and a consistent drop in alfalfa levels. Almond hulls have bumped around a bit, but there was no net change in its feeding level.

The form of the changes in ration ingredient levels has differed since 2014. The impacts of all those almond trees planted over the past 10 years have come home to roost with a substantial boost in almond hull feeding levels, a continuation in the uptick in grain feeding levels — likely due to continuing low prices for corn grain — and lower levels of (mostly) homegrown silages. The only thing that continues unabated is the decline in alfalfa use; but since 2014, the decline has been for a different reason.

In contrast to pre-2014, when alfalfa was losing market share to silages, it is now almond hulls that are gaining market share at alfalfa’s expense. In light of the massive jump in almond hull availability projected in the next few years, it is a near certainty that this trend will continue and alfalfa’s market share will slide accordingly. 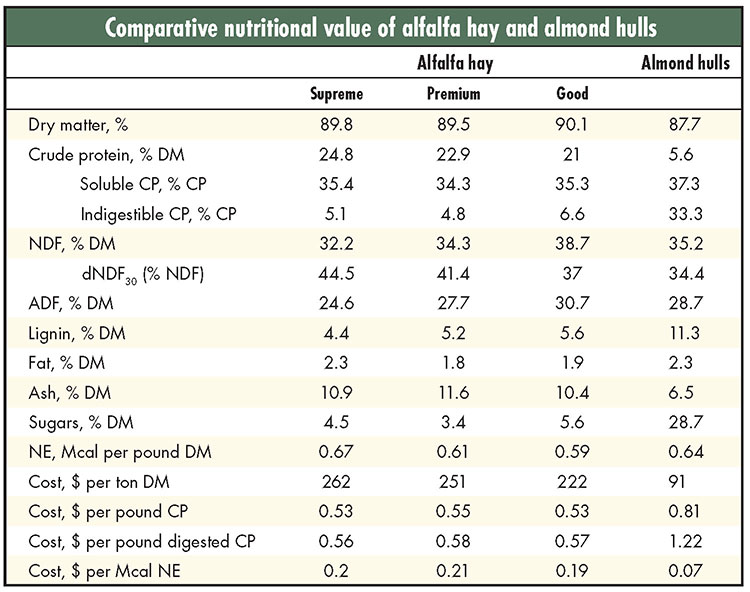 The consistency of almond hulls (as purchased) is a continuing issue due to variable levels of contamination of hulls with shells and sticks, which the almond industry is busy trying to address with a cost-effective process. Nevertheless, it is still possible to compare average almond hulls to alfalfa hay nutritionally and fiscally (see table). The results are telling in terms of why hulls have been displacing alfalfa hay.

An apparent disadvantage of almond hulls is its much higher level of lignin. However, this is misleading because much of the lignin is in contaminant shells and sticks, and so it is concentrated where it will have no impact on the digestibility of hulls, which have relatively little lignin. Fat levels do not differ much between alfalfa hay and almond hulls, but hay contains more nutritionally low-value ash.

But almond hulls have a final ace to play — their levels of free sugars are five- to sixfold higher than in alfalfa hay. And sugars are, nutritionally speaking for cows, a big plus because they are essentially 100 percent fermented in the rumen and, more importantly, do not lead to accumulation of lactic acid, which is the main causative acid in rumen acidosis.

Finally, almond hulls look pretty good compared to alfalfa hay when energy (net energy of lactation, NEL) is considered. They sit between the NEL values of Supreme and Premium alfalfa hays. This is key because after all nutrients are balanced in dairy rations, it is the NEL level that determines milk yield. In short, when you move from alfalfa hay to almond hulls in a dairy ration, you trade off CP to gain sugars, which is an energetic “wash.”

What must alfalfa do?

Alfalfa hay has been in a virtual 20-year freefall relative to its importance in the California dairy industry. If action is not taken really soon, it is likely that the status of alfalfa hay will erode further in terms of use and price.

What must the industry do to thwart this trend?

Define the energy value of alfalfa hay: One of the huge advantages that Western, pure-stand alfalfa hays have relative to all other dairy feeds is a standardized grading system that reduces product variation. This factor plagues many other traded feeds, including almond hulls. The main advantage of the current grading system is that it is based upon the energy value of alfalfa hay, which as noted earlier, is a key nutritional attribute of the main feeds used to create dairy rations.

On the flip side, there are serious problems with the current grading system. It is based upon an obsolete nutritional system (digestible energy, DE); uses an even more obsolete nutritional term (total digestible nutrients, TDN) that is no longer used to formulate dairy rations; is based entirely upon one analyte (ADF), which results in high variation among laboratories in TDN predictions; overvalues hays with high ash contents; may undervalue new reduced-lignin alfalfa hays; is based upon research completed as much as 60 years ago; and, worst of all, uses an equation (Western States Equation) with an obscure origin that cannot be recreated and only appears in one “out of print” leaflet.

Over the past 20 years, Dan Putnam, University of California extension forage specialist, and myself have offered several low-cost replacement energy prediction systems for alfalfa hay that would retain the energy focus of the current alfalfa hay grading system and upgrade the energy prediction equation to contemporary standards and terms. Alas, to date, nothing has changed. Adversity to change leads to irrelevance, and that may be the fate of the California alfalfa industry unless it embraces and develops a new model.

In vitro data developed by my group at UC-Davis, as well as by others, supports the belief that lower lignin alfalfa hays will have a higher NEL value. However it is critical that the superiority of these reduced-lignin varieties be confirmed in dairy feeding studies so that alfalfa growers can capture their value.

And so we return to the need to replace the current TDN equation. Because it is based solely upon ADF, it will almost certainly undervalue these new reduced-lignin varieties — the only question being, “By how much?” The time for change has arrived!

Document the value of alfalfa hay beyond energy: Nutrition professionals, using computer software, formulate most rations for lactating dairy cattle. However, the beneficial characteristics of alfalfa hay such as the feed’s cation exchange capacity (CEC) or alfalfa’s ability to stimulate cud chewing are often not completely described in these programs. In some cases, little effort has been devoted to accurately describe a nutrient (for example, pectin) that alfalfa has to offer. Currently, if a feed characteristic is not in the ration formulation software, then it essentially does not exist. 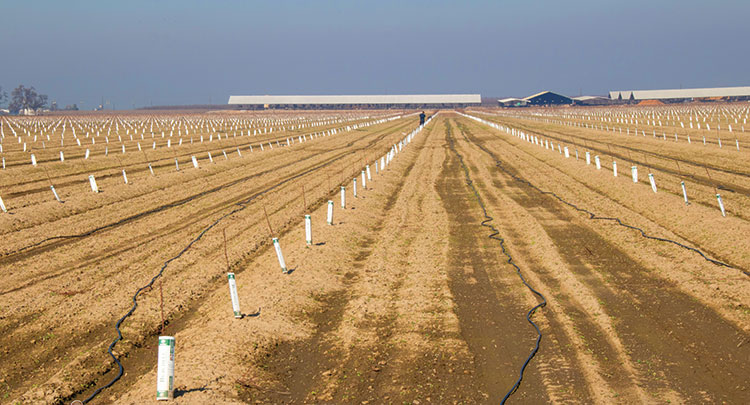 Almond acres in California now total over 1 million, taking land that was previously used for alfalfa production. In some cases, trees are planted right up to the dairy barn.

A call to action

In recent years, the California alfalfa industry has been relatively inactive in sponsoring research to identify and quantify beneficial characteristics of alfalfa hay that are not described in the computer software used by nutrition professionals, thereby consistently undervaluing the crop. This inactivity contrasts to other feed industries, such as those that produce DDGS, almond hulls, and canola meal, which have been very active in funding research and directing it to demonstrate the beneficial attributes of “their” feeds.

Far too much of the information used to nutritionally evaluate alfalfa hay, such as the antiquated California TDN system, is of dubious relevance to the contemporary Western dairy industry, modern alfalfa cultivars, and prevailing harvest practices.

It is critical that the California alfalfa industry regain leadership by initiating research programs to fund a wide range of innovative research projects to define, enhance, and demonstrate the energy value of alfalfa hays in contemporary terms. Aside from energy, they must also demonstrate the additional characteristics of alfalfa hay that provide benefits to the lactating cow. It is also critical that the industry lobby publishers of key dairy low-cost ration formulation software to include these characteristics in their programs.

This article appeared in the March 2019 issue of Hay & Forage Grower on pages 6 to 8.

With alfalfa, we want it all Next