Management-Intensive grazing (MiG) has become a commonplace practice among many livestock producers. From operations with cows to small ruminants, this goal-driven approach to grassland management and utilization has helped many producers create healthier pastures and improve their operation’s carrying capacity. Despite its wide use, however, MiG’s benefits have yet to be well-proven with one ruminant — bison, a species now becoming popular with some North American ranchers.

The Snowcrest Ranch, a Turner Enterprises-owned operation, located in Alder, Mont., is among a small handful of bison ranchers testing MiG’s use and benefits with cattle’s woolly cousins. Ranch manager Aaron Paulson believes, much like beef, bison’s niche market will also begin to see segmentation into other finishing styles in the years ahead. Grass finishing bison is one way for bison producers to set their products apart from others.

“The majority of bison we are raising are for meat,” Paulson said. “That’s why we’ve started a side venture of raising some grass-finished animals.” 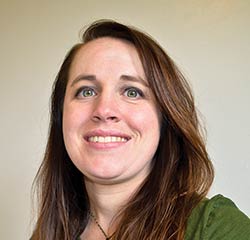 Jesse Bussard
The ranch worked with grazing expert Jim Gerrish to develop their MiG experiment, which began during the summer of 2018 with a herd of 186 bulls. Now in its second year, they’ve bumped up herd numbers to 313 head. The 2019 herd is a mixed group of both yearling and 2-year-old bulls. (Note: unlike cattle, bison raised for meat are not castrated.)

“We’ve got two age classes in there, and we’re keeping them on the best plane of nutrition we can on the ranch,” Paulson said. “They’re on tame (improved) forages that we can control and manage well.”

During the 2019 grazing season, the experimental herd was grazed on a 151-acre, irrigated pasture, which was watered by both center pivot and flood irrigation. Species like alfalfa, clover, orchardgrass, smooth bromegrass, and timothy make up the forage mix.

Paulson explained his herd manager, Keaton Mares, moved the herd every single day, sometimes twice a day, with animals grazing from 5 to 7 acres per day.

As the summer wore on, grazing cells became larger to accommodate animal growth over time. Due to cooler temperatures experienced in the Intermountain West Region this past summer, forage growth was slower than usual.

“Our goal last year was to not leave the pivot from May until October, and we did pretty well with that 186-head smaller group,” Mares said. “This year, we’ve had to incorporate other pastures to provide adequate regrowth because we need at least 40 days of recovery. Our goal is usually 30 days,” he added.

In year one, Mares said they were still learning and experimenting with how large an area to give animals during a 24-hour period. They quickly realized, though, given too much acreage, bison would tend to selectively graze, leading to poor forage utilization.

In year two, Mares has dialed things in. He took forage clippings and used a grazing stick to estimate forage production at the beginning of the grazing cycle. Mares estimates, for the 2019 season, their pastures were producing around 250 to 300 pounds of forage per inch. Using the average, he was able to more accurately determine carrying capacity and grazing cell size throughout the season. In addition, Mares began using OnX, a GPS-based hunting app, to map out acreage of grazing paddocks and determine where to put fencing to create alleyways.

“Now on my second cycle through, I’m able to gauge the size of pasture I need visually,” said Mares. “I can just move over a fence post here or there and put it back up. I’m not retracing my fenceline,” he asserted.

As of midsummer, Paulson and Mares estimated they were running a stock density of around 42,000 pounds of bison per acre.

“In the sense of what we’re doing — bison ranching — that’s high,” noted Paulson. “But, keep in mind, some folks are running upwards of 800,000 pounds per acre with beef cows.”

Overall, Paulson said MiG is paying off economically for them. He explained, “We are making more money on pounds of gain versus pounds of hay that we’d produce on the center pivot. So that’s a benefit.”

“Those are our best,” Paulson said. “I don’t think we achieved that number before when we weren’t grazing at this level of intensity. Those numbers are higher than what I thought we could ever do on bison.”

Going forward, Paulson said if animals continue to yield like they want them to, they may expand their MiG grazing setup to an additional area on the ranch.

“If we could have two really good locations set up for this, it would open up another 800 to 1,000 acres of ground that we could graze on,” Paulson said. “Potentially, at some point, we could possibly even expand herd numbers.”

This article appeared in the November 2019 issue of Hay & Forage Grower on page 25.