Alfalfa farmers may have one more weapon to use in their battle against plantain, a notoriously difficult-to-control weed in alfalfa cropping systems, according to Leslie Beck, a New Mexico State University (NMSU) extension weed specialist. 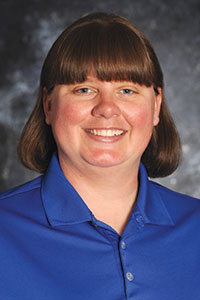 Leslie Beck
NMSU $6,309
Using Alfalfa Checkoff research funding, Beck evaluated the performance of Sharpen (saflufenacil), a BASF herbicide recently labeled for use on dormant alfalfa, to control plantain. The herbicide was as effective as other commercially available herbicides in injuring common and buckhorn plantain and didn’t negatively affect alfalfa yield. Like the other herbicides in farmers’ arsenals, Sharpen didn’t completely control plantain, added Beck, but it does use a different mode of action, which can help to slow development of herbicide resistance.

“Almost since I first started here (in 2015), I was getting inquiries from alfalfa farmers about how to better control plantain in alfalfa,” Beck said. “I would say plantain is up there with the more difficult weeds to control in alfalfa simply because the nature of the plant itself makes it extremely difficult to control.”

Both buckhorn and common plantain have broad, leathery, thick leaves and are covered with scratchy hairs. “Therefore, it is very difficult for an herbicide to penetrate through that barrier to actually move into the plant and translocate the way it needs to in order for a systemic herbicide to work,” Beck said.

Because alfalfa is also a broadleaf plant, herbicide options to control plantain without injuring the crop are limited. Plus, both plantains, like alfalfa, are perennials and have extensive taproot systems.

“Plantains have almost a network of fibrous roots,” Beck said. “When you have multiple thickened roots like that, it’s very difficult for one application of an herbicide to be that effective on it. And if you don’t injure the root system, the plant keeps coming back every year,” she added. 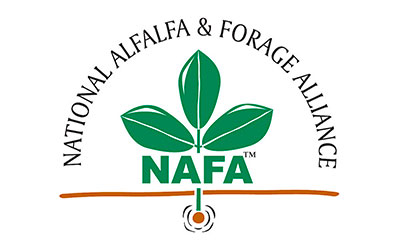 In September 2017, she and NMSU colleagues Mark Marsalis, an extension forage specialist, and Leonard Lauriault, a forage crop management scientist, began growing both types of plantain in greenhouse trials. The scientists’ goal: To compare the efficacy of Sharpen with standard herbicides currently being used to fight the weeds. Nine herbicide treatments and application rates were tested.

“High (2 fluid ounces [fl oz] per acre) and low (1 fl oz per acre) rates of Sharpen provided pretty high levels of injury to the plantain that we had in the greenhouse,” she said. “Sharpen tank-mixed with Pursuit and with Raptor were initially the ones that showed the highest significant amount of injury on both plantain types. But as the trial progressed, injury from those two combination products was still comparable to what we were seeing with the high rate of Sharpen.” None of the herbicides provided 100 percent control.

Repeated in the field

A field study testing herbicide effects on alfalfa growth and yields began December 2017 at NMSU’s Los Lunas Agricultural Science Center. As with the greenhouse trial, Sharpen and eight other herbicides labeled for dormant-season alfalfa were applied — this time to an established, healthy, conventional alfalfa stand.

Because of southern New Mexico’s warm temperatures and longer daily photoperiods, alfalfa tends to slow in growth rather than show true dormancy, so herbicide applications were made December 1 to allow alfalfa to recover during slowed fall growth. Fall is also the best time to apply herbicides to plantain because they hit the weed when it’s at its weakest — redirecting carbohydrates and other nutrients to its roots for survival, Beck explained.

Alfalfa showed “no detectable differences” in injury or slowed growth from any of the herbicide treatments — except Roundup (glyphosate), applied at 44 oz per acre to assess potential control of plantain in Roundup Ready alfalfa. Beck thought the glyphosate-treated conventional alfalfa was never going to recover from the injury. But the alfalfa regrouped with growth that spring and, ultimately, still had a comparable yield to that of the untreated control. Yields were similar for Sharpen-treated alfalfa as compared to other herbicide-treated alfalfa plots and the untreated control.

A second year of Alfalfa Checkoff funding allowed Beck to look at potential tank-mix combinations with Sharpen as well as sequential applications. “We wanted to see if making a second application 45 days later would enhance injury to the plantain itself. But we also had to see if that had an effect on the alfalfa yield for that next spring crop.”

“We’re trying to figure out the nuances with our timings with tank mixes in order to make management more impactful. I think farmers could take the information from this initial study and start fine-tuning their weed management practices,” she added. 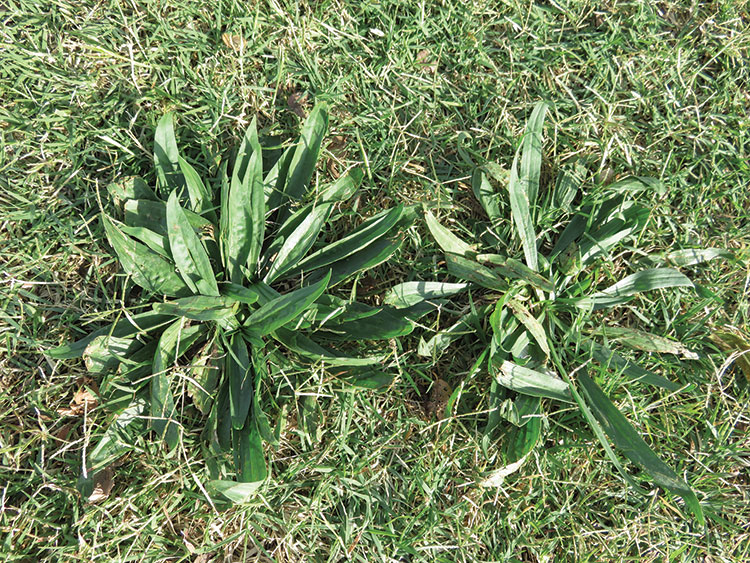 This article appeared in the January 2020 issue of Hay & Forage Grower on pages 14 and 15.

Seeking out new alfalfa fungicides Next