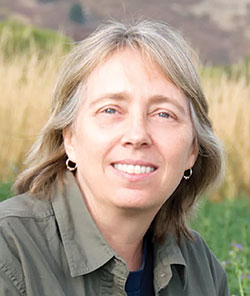 A fungicide used as an alfalfa seed treatment for decades in the U.S. — to help quickly establish and protect the crop — was compared with eight soybean fungicides in NAFA Alfalfa Checkoff-funded research. The goal of the research: to determine if the soybean products could fight the effects of several pathogens causing the soilborne disease seed rot and seedling damping off in alfalfa.

Apron seed treatments have been used on alfalfa seed since the 1970s. They have been effective against the pathogens Phytophthora and Pythium, but not against Fusarium in alfalfa, said Deborah Samac, the USDA-ARS plant pathologist who conducted the research. She has been concerned that some of the disease-causing organisms may have developed resistance to Apron and Apron XL, and that the fungicides haven’t been controlling some Pythium species even since the 1970s and 1980s.

More recently, another pathogen, Aphanomyces has been shown to affect alfalfa establishment as well.

“There are resistant alfalfa varieties, but not every seed in a bag is going to be resistant to Aphanomyces, so a fungicide can help to achieve improved establishment,” Samac said. “The seed treatment also doesn’t protect an older plant; the fungicide probably only lasts a month. If you continue to have pressure from pathogens, particularly Aphanomyces or Phytophthora, that’s where you can see die-off of plants within a couple of months of establishment,” she added.

Increasingly, wet falls across the Midwest are exposing adult plants to these pathogens after the fungicide has worn off. “Fungicides are not going to be the silver bullet, but they are going to help get the crop established,” Samac explained.

Using Checkoff research funds, she and USDA-ARS research technician Melinda Dornbusch gathered fungicides from several chemical companies and incorporated them in an agar medium at different concentrations with the different pathogens causing seed rot and damping off. They wanted to see what concentrations would inhibit the growth of the pathogens, then selected the two with the broadest range of activity.

“I was a little disappointed that the two (soybean) fungicides didn’t show better efficacy than Apron XL,” Samac said. “But we used artificially infested soil; we didn’t really know if all of the pathogens were really active.”

Future research will include testing seed treatments with soil infested with individual pathogens as well as field testing fungicide-treated seeds. The research will also look at how fungicides enhance genetic resistance in different conditions and field sites with different soil types.

“We can do polymerase chain reaction (PCR) assays to quantify the different organisms in the soil,” Samac pointed out. “Farmers would know which pathogens are most numerous in their soils and consider different management.”

Farmers should continue to select alfalfa varieties highly resistant to Aphanomyces and Phytophthora root rot and buy alfalfa seed treated with multiple fungicides if they have had establishment problems.

“The herbicides currently being used in corn and soybeans may have longer residuals than those used in the past,” Samac said. The plant pathologist suggested taking a whole-crop-system approach when planning herbicide applications. The final report on the research can be found at bit.ly/HFG-Samac.

Project results
This article appeared in the February 2020 issue of Hay & Forage Grower on pages 14 and 15.

Alfalfa publication debuts in D.C. Next