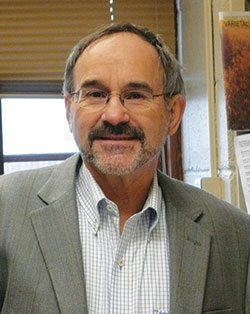 Craig Sheaffer
Minnesota $38,450
“It’s a good summary of the valuation of alfalfa,” said Craig Sheaffer, a University of Minnesota forage agronomist and one of the publication’s authors. “Alfalfa is the ideal crop to provide economic return as well as environmental benefits and ecosystem services, and we need to publicize this more.”

“NAFA uses the publication extensively during the D.C. Fly-In to help educate congressional offices and agencies about the environmental benefits of alfalfa, which is the third most valuable field crop in the nation,” pointed out NAFA President Beth Nelson. “Alfalfa is the ultimate regenerative crop, increasing biodiversity, enriching soils, improving watersheds, and enhancing ecosystems. We’re striving to get alfalfa its rightful place on the agricultural landscape — but policymakers and public research entities must first be educated about alfalfa’s economic and environmental attributes,” she added.

Sheaffer plans to hand out the booklet to growers, extension workers, and Minnesota legislators to help explain how alfalfa can and should be used in cropping systems – and why it is the ultimate cover crop.

“The winter-annual cover-crop system we have now is a lot of rye or turnips or a mixture of crops with no economic return,” Sheaffer said. “Those crops do have the potential to reduce erosion and recycle nutrients, but there is no cash flow associated with them. In the case of alfalfa, you can get all of those ecosystem values as well as getting an economic return. Why isn’t alfalfa a predominate cover crop?”

The forage agronomist will also use the publication in water-quality discussions with state policymakers. “Alfalfa is not widely discussed; no perennial forage crop is,” he noted.

The booklet, first published in 2001, was authored primarily by California specialists with more of a Western focus. NAFA requested “a more broad, nationwide publication with an increased emphasis on alfalfa research,” Nelson said.

A section on how alfalfa improves soil health was greatly expanded, Sheaffer explained. “We talk about soil carbon and show rooting comparisons. We also talk about insects — a lot of people are concerned about bees and honey, and we had a chapter on how pollinators benefit from alfalfa. Then we have the wildlife part, which was a large part of the old publication, and talk about how to make alfalfa systems more wildlife friendly.

“At the very end, we have a chapter on ecosystem services. It combines information from previous chapters, looking at nitrogen fixation, soil stabilization, nutrient retention, carbon sequestration, and how alfalfa compares to annual cropping systems and is superior at providing ecosystem services,” he said.

Sheaffer enjoyed trying to determine alfalfa’s full value but found it a rather daunting task. “Quantifying alfalfa’s value just to soil health is very difficult,” he said. “And it is hard to find good data comparing alfalfa to other crops. We have some data here (in the booklet), and I wish we had more. It’s a scenario for more potential research.

“People who grow alfalfa and use it in rotations see its value. But then you try to find detailed numbers, and it’s not easy. But I think our publication has a good summary of benefits,” he added.

Sheaffer hopes farmers and industry people can get the publication to their state and federal legislators. He also believes it can be a good reminder to dairy farmers evaluating their herds’ forage diets. “We know there is a decrease in alfalfa acreage in part because there are fewer dairies, but also because of the competition with corn silage. If you are a dairy producer, you could look at this and say: ‘Maybe I shouldn’t replace so much of my alfalfa to corn silage because of alfalfa’s value.’ Maybe it will be a good reminder to them of what they already know,” Sheaffer said. 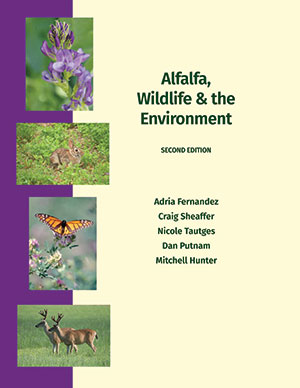 Alfalfa, Wildlife & the Environment is an easy read and well-organized. The first several chapters explain what the crop is, what it brings to livestock diets, how it grows and improves soil health, and how it provides beneficial insects food and cover. Additional chapters tell how alfalfa and wildlife can exist together and how the crop contributes to the entire cropping system. The final chapter pulls together how the crop contributes to the environment as well as our own well-being.

For copies of the publication, visit www.alfalfa.org/publications.php

The visually appealing publication reflects the state of current production practices and scientific research, with new and reorganized text, updated terminology, and greater emphasis on how alfalfa is grown and used today. The package includes a two-page informational handout and a narrated slide presentation summarizing key alfalfa information.

Soil testing for alfalfa autotoxicity Next