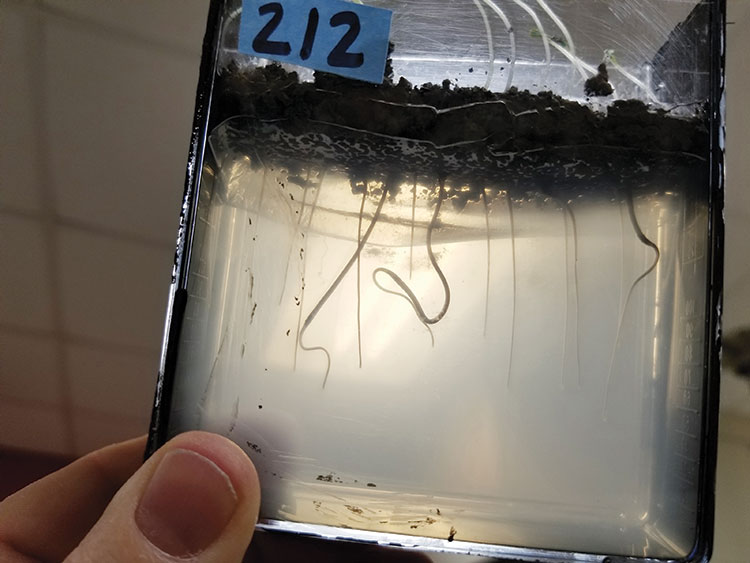 Alfalfa seedlings, grown in a half-inch of soil on top of agar in see-through flasks, exhibited abnormal, twisted root growth, which may be an indicator of autotoxicity in the soil.

Recent Alfalfa Checkoff research may lead to a quick soil test indicating whether farmers can replant alfalfa on winterkilled or terminated acres without it suffering from autotoxicity.

“‘Can I replant my alfalfa yet?’ is one of the most common questions I get,” said Kim Cassida, the Michigan State University (MSU) Extension forage specialist who is working to develop a soil bioassay for alfalfa autotoxicity. The current recommendation for her region — citing it may take two weeks to two years for autotoxicity to fade before replanting alfalfa — hasn’t offered a helpful answer.

“It leaves farmers in limbo, reluctant to risk expensive seed on trial and error, and may contribute to decline in alfalfa acreage if it seems less risky to just grow something else,” she pointed out in a research report.

Autotoxicity, Cassida said, is a form of allelopathy, in which one plant can affect another through production of a compound or compounds. Essentially, autotoxicity can keep alfalfa seedlings from germinating and cause permanent damage — and lifetime yield reductions — to root systems of seedlings that appear to have established successfully. 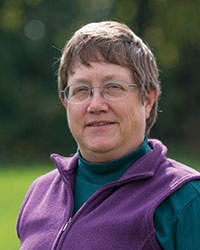 Kim Cassida
Michigan State $29,738
Cassida hopes the soil test or bioassay will be available to farmers within the next couple of years. “Say a farmer had a field that had winterkill and wanted to know if they could go out on that field right now and replant. He sends in a soil sample, we run the bioassay, and then, within a week, he has an answer back that there is a lot of autotoxicity in the field or it will say everything is fine,” she said. “It’s not going to give a degree of toxicity. But that’s all the information he needs to make a decision of whether or not to plant that field right now.”

With Alfalfa Checkoff funding, she and Erin Hill, an MSU weed science diagnostician, began using a soil-on-agar method in 2018, planting seeds on a half-inch of field soil on top of clear agar in a culture flask. The method detected alfalfa shoot and root growth differences within four to five days; its results were validated by greenhouse studies. What the researchers still need to validate is that those differences are definitely due to autotoxicity and not root disease or some other factor.

“Unprecedented rainfall in 2019 may have leached some autotoxin out of the soils,” Cassida said. “For the initial work, we were digging soil samples in a monsoon. If we had a drier year, I think it might have been easier to detect differences.”

She saw more root development differences due to different alfalfa varieties, indicating varieties differ in their tolerance to autotoxicity. “We could also have different degrees of tolerance of the toxicity in the seed planted,” she said. That may mean the bioassay would require use of test seeds from the same variety that will be planted.

“We have quite a bit more work to do,” Cassida added. Many more soils from a variety of environments, including dry ones, are and will be tested before Cassida considers the bioassay to be fully validated and ready for farmers.

“I think we are going to have winterkill again this year, so we are probably going to have people trying to re-establish fields that maybe they shouldn’t. I hope to get soil from some of those fields and then follow up and see how the stands are. We’re going to do more greenhouse work, too,” she said. A protocol for handling soil samples will also need to be developed.

Checkoff funding helped generate additional state money to continue the research, and she also plans to apply for future funding from the Alfalfa Seed & Alfalfa Forage System Program, established through efforts of the National Alfalfa & Forage Alliance and administered competitively by the National Institute of Food and Agriculture (NIFA).

Her goal is to have a working soil test, plus a protocol in handling soil samples, within the next two years. For more on the research, visit alfalfa.org.