Bring warm-season annuals out of the bullpen This year’s World Series turned out to be a battle of relief pitchers. In nearly every game, the starters were in the shower before the fifth inning — often, long before.

One might make the analogy that perennial forage crops are the starters on most farms; they are depended on for reliable and long-term forage production year in and year out. It’s also true that our starting forages often run out of gas at some point in the summer when temperatures climb and soil moisture becomes limited. In the case of alfalfa, sometimes offseason injuries occur from cold or ice.

It’s during these times when it may be beneficial to make a call to the bullpen and bring in some warm-season annuals such as sorghums or millets for additional harvested or grazed forage.

“One of the things that has really brought about more interest in warm-season annuals is the new and improved hybrids that are now available,” said John Bernard, a professor emeritus who served as an extension dairy specialist with the University of Georgia for over 22 years. “These new offerings bring with them vastly improved forage quality.” 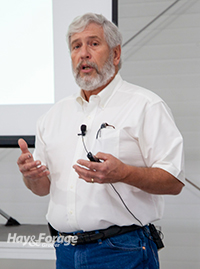 As a speaker at World Dairy Expo during one of the Dairy Forage Seminar presentations, Bernard noted that warm-season annuals not only exhibit exceptional drought tolerance, but they are also more tolerant of marginal soils, have a shortened growing season, and in some cases, may be grown at a reduced cost compared to other alternatives.

“Of course, everything has limitations, and warm-season annuals are no different,” Bernard noted. “Unlike corn, there is generally no grain involved, and so warm-seasons will often have a lower energy content. Also, the non-brown midrib (BMR) hybrids can limit intake and production, especially for high-producing dairy cattle.”

Bernard also pointed out that sorghum species have the potential for prussic acid toxicity and are difficult to harvest for dry hay.

From a water use perspective, sorghum and millet produce about double the dry matter of corn per inch of water received. “This water advantage for warm-season annuals is largely because their roots grow deeper and are more plentiful,” Bernard said. 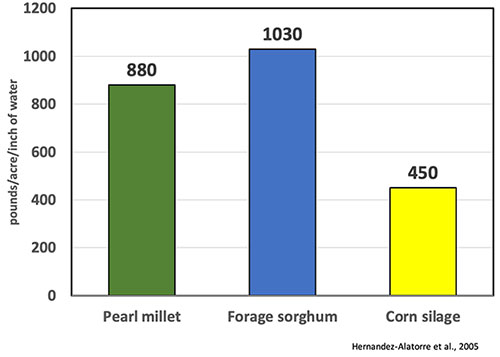 The photoperiod sensitive hybrids have a delayed flowering or heading characteristic. “These have tremendous yield potential,” Bernard noted.

“The BMR hybrids have less lignin and are more highly digestible, but they also come with a higher lodging potential and about a 10% yield drag,” the dairy specialist said. “A BMR brachytic dwarf forage sorghum hybrid is shorter, which improves standability, but also doesn’t give up a lot in yield because it has a thicker stalk.”

Bernard pointed out that forage sorghum has gotten a bad rap because it is digested more slowly and doesn’t provide as much energy as corn. However, he emphasized that the BMR hybrids are much improved in this regard and have become competitive with corn silage from a feeding standpoint.

“When substituting forage sorghum or sorghum-sudangrass into a lactating cow diet, you need to watch that neutral detergent fiber levels don’t get too high,” Bernard cautioned. “The BMR sorghums have more digestible neutral detergent fiber than corn silage, but also don’t provide as much energy from starch. We have to watch not to push the fiber levels too far so as not to limit dry matter intake.”

One of the more recent challenges for growing sorghum species in the South has been the emergence of the sugarcane aphid. “Aphids can establish on the underside of the leaves and extract plant sugars,” Bernard said. “At high enough populations, they can kill a crop. Researchers have found that there are different tolerance levels among hybrids, so this is one way to combat the problem, but no hybrid is completely resistant,” he added.

Other means of keeping the sugarcane aphid in check is to control johnsongrass, which acts as an overwintering host; plant early; use an insecticide seed treatment; scout frequently; and apply an approved foliar insecticide if populations reach economic levels.

In addition to sorghum species, Bernard said that pearl millet is also gaining in popularity as both a harvested and grazing crop. Millet hybrids are available with the BMR trait, do not pose a prussic acid toxicity threat, and are not desired by the sugarcane aphid. They can be used successfully as a grazing crop or as a partial substitution forage to stretch corn silage inventories.

“While corn silage and alfalfa will continue as the king and queen of forages, warm-season summer annuals can be used as part of a forage program to feed lactating cows, dry cows, and replacements,” Bernard concluded. “These species are especially useful in regions where water is limiting or as a hedge against drought.”

So, when your starting forage species begins to wane, look to the bullpen and bring in one of the warm-season options to help bolster feed inventories or provide summer grazing. They can be a valuable member of your forage lineup.