Swath-graze cattle to save and gain 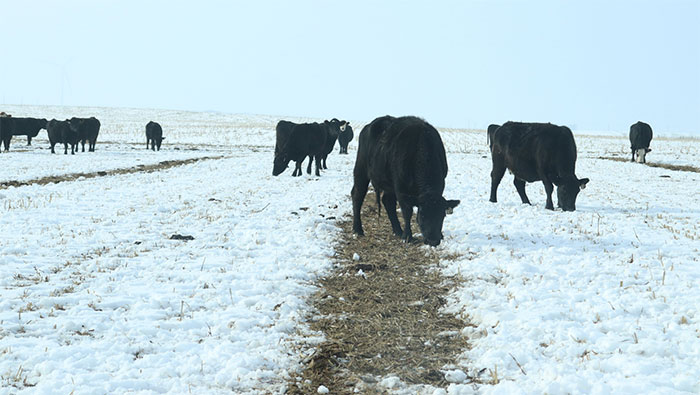 Photo: Garland Dahlke, Iowa State University
Swath grazing can save livestock producers time, labor, and money. This winter feeding strategy involves cutting forage in late fall and raking it into windrows for cattle to graze over winter – even under piles of snow.
Iowa State University will utilize swath grazing for the third year this season. This is also the third year forage sorghum and German millet will be the species used on the university’s farm.
Garland Dahlke, an associate scientist at the Iowa Beef Center, notes that after an initial harvest for hay in July, the sorghum and millet are left to grow until it is cut again before the first consequential snowfall. Then, the forage is raked into swaths that are wide enough for cattle to find beneath a blanket of white.
“Last year, for instance, mowing and raking occurred December 9,” Dahlke reports in a recent Iowa Beef Center newsletter. “The first snowfall occurred December 11, and the cows were given access to the swaths after they were removed from the cornstalk residue field on December 23.”
The beef specialist notes that producers in areas with colder weather could cut forage earlier to ensure better quality; however, this process is delayed as long as possible on the university’s farm because of frequent freezing and thawing events and rainy weather that the central part of the state experiences this time of year.
Delve into the data
Swath grazing only requires a few minutes of a farmer’s time to move electric wire along the windrows every two to three days. At Iowa State, no back fence is used so cattle have access to the single water source stationed in the field, which saves even more time and labor. Last year, the university’s cow herd swath grazed until mid-February before they started receiving supplemental feed prior to March calving.
“Forage utilization in the swaths was measured last year and 70% of the provided forage was utilized by the cows, allowing for 88.1 cow-days per acre,” Dahlke states. “Data from older experiments, using intensively managed grazing of stockpiled forage, indicate about 40% forage utilization, or 46.1 cow days per acre,” he adds.
To further compare, Dahlke points out cattle have been shown to utilize roughly 85% of forage that is baled, stored, and fed daily. Doing so also affords about 98 cow days per acre, but this practice demands more equipment use.
Observed benefits
Swath grazing requires access to a field for mowing, fencing materials, and a water source. If these criteria can be met, Dahlke offers a list of benefits to this winter feeding strategy that have been observed on the Iowa State farm.

Stockpiled forage may not need nitrogen Next