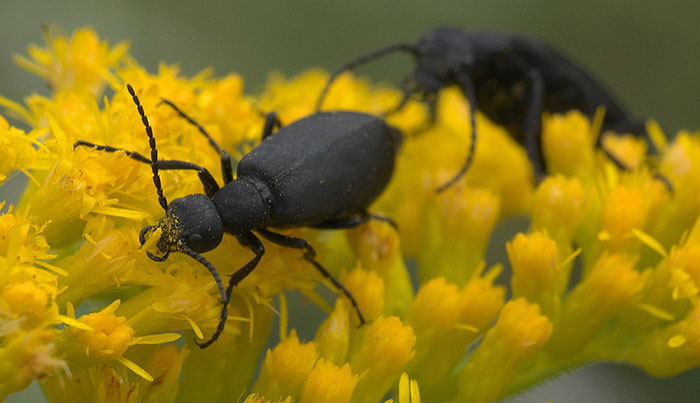 Few pests are more aptly named than the blister beetle. These insects have cantharidin in their blood — a toxic chemical that can cause painful, fluid-filled blisters upon skin exposure. What’s more alarming than these blisters, though, are the health issues that arise when animals consume blister beetles in dry hay.

Patrick Wagner, extension entomology field specialist with South Dakota State University, says blister beetles have been spotted in several alfalfa fields in his state. While blister beetle larvae are not threatening, the adult insects pervade alfalfa stands and feed on leaves and blossoms.

Blister beetles secrete cantharidin to defend themselves from predators through a process called reactive bleeding. Cantharidin is also released when beetles are crushed, which can occur during mechanical hay harvest. If whole or partial insects are incorporated in bales, livestock can experience mouth sores, digestive issues, kidney damage, and even death.

To protect animals from blister beetles, scout for the insect before each cutting. “Second and later cuttings are at higher risk of infestation because blister beetles are more abundant in early to mid-summer,” Wagner states. “However, blister beetles can also be an issue for first cutting if it is delayed due to a cool spring or other weather conditions,” he adds.

Adults vary in color and size depending on species, but the most common species in South Dakota are the black, ash gray, immaculate, striped, and margined blister beetle. Another distinguishable characteristic of blister beetles is their thorax, or the middle segment of their body, which is narrower than their head and abdomen.

Blister beetle larvae feed on grasshopper eggs, so adult numbers may be greater in areas where large grasshopper populations were observed the previous year. If this is the case, Wagner recommends managing fields for grasshoppers to lessen blister beetle pressure in the future.

Insecticide is not a solution for blister beetles. Although it will kill them, it does not remove them from hay. Dead blister beetles remain toxic, and spraying insecticide can elevate the number of insects in bales.

“The alternative is to cut alfalfa prior to peak bloom, as blister beetles are attracted to the blossoms,” Wagner states. “It is also important to allow the cut alfalfa to dry fully before raking so that the beetles have time to vacate the plants before baling.”

Additionally, refrain from conditioning alfalfa. “Crimping increases the likelihood of crushed beetles remaining in hay,” Wagner explains. “From personal observations, many blister beetles will escape from mowed alfalfa within the first three to six hours.”

Do not sell hay that is infested with blister beetles unless buyers are aware of the issue. Moreover, do not market infested bales to equine owners as horses are highly sensitive to cantharidin.