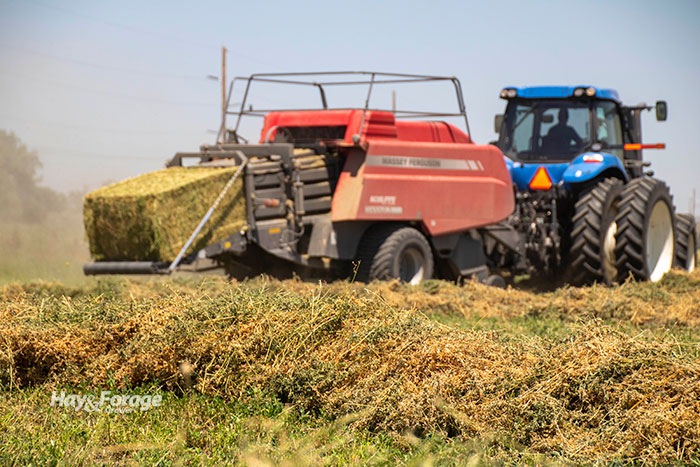 Some airplane passengers choose to pack all of their belongings in a carry-on suitcase to maximize space and avoid paying for a checked bag. Similarly, some hay producers apply the same logic when they make high-density bales to enhance baling efficiency and save money in the long run.

In addition to baling, farmers incur the cost of gathering, transporting, storing, and feeding hay and straw. Kevin Shinners, emeritus professor in the Biological Systems Engineering Department at the University of Wisconsin-Madison, notes that these rates are influenced by the number and weight of bales being handled, which depend on the type of equipment being used.

Since the large square baler was invented over 40 years ago, manufacturers have developed extended density and high-density balers. The latter was designed to maximize bale chamber convergence and length, giving it more back pressure and compression force than conventional machines.

Shinners says greater compression force requires a larger gearbox, a stronger plunger, and a more robust driveline and frame, which is why high-density balers have such steep retail list prices. Even so, these balers will reduce the number of 3x4-sized bales made by 32% compared to a conventional baler of the same size. This reduces the cost of hay production and distribution.

To comply with transport weight restrictions and legal trailer dimensions, engineers have found that the optimum bale density is 15 pounds per cubic foot. While this may not be a problem for some forages, other species might need to be baled at a higher density to meet the criterion.

“Consider the crops you bale,” Shinner asserts. “Density goals can often be met when baling alfalfa with an extended density baler, but if straw is an important crop to bale, high-density balers could be economically viable.”

Even if purchasing a high-density baler is justified, these machines can be up to 50% more expensive than conventional ones. They also require a high-horsepower tractor to operate, and bales must be secured with twine that has additional tensile strength. Moreover, forage moisture must be carefully monitored before baling to ensure hay is not too wet.

“It is recommended that moisture be less than 18% — and ideally less than 16% — when hay or straw is packaged in large bales,” Shinners states. “This goal is especially important in high-density bales because these heavier bales have more substrate to support microbial activity and heating.”

Applying propionic acid to hay before it is baled can further reduce the risk of spoilage and spontaneous combustion. In summary, maintaining forage quality will encourage a faster return on investment in a high-density baler.

Supplement to dampen drought stress Next