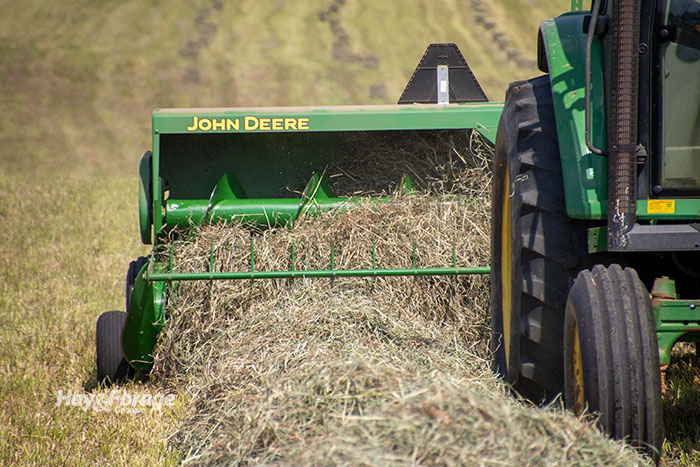 Cutting forage at an optimum quality remains the primary challenge for haymakers. Following closely behind is the challenge of baling hay at the proper moisture content. Low-moisture bales preserve nutrients and safeguard forage quality. Conversely, baling hay that is too wet can lead to heating and nutrient loss.

James Rogers with North Dakota State University Extension explains microorganisms are to blame for heat-damaged hay. When hay is baled at a low moisture, oxygen is depleted, and aerobic bacteria cannot survive. High-moisture hay, on the other hand, creates an environment where these bacteria thrive.

“Since they are living organisms, a food source is required, which they obtain from soluble carbohydrates in plant cells,” says the forage crops production specialist. “These organisms also respire, giving off carbon dioxide and generating heat, which leads to multiple consequences.”

Moisture content at baling has a proportional relationship to the severity and duration of heating. Rogers notes this is true regardless of bale size, but heating tends to be more intense in larger, denser bales. For example, if a small square bale and a round bale with a 5-foot diameter are both baled at 20%, the round bale will have a higher peak internal temperature.

One implication of heat-damaged hay is lower crude protein content. Rogers says heating induces the Maillard reaction — a chemical reaction in which the nitrogen in crude protein is linked to forage carbohydrates. As a result, protein becomes insoluble.

Other implications of heat-damaged hay include dry matter loss, mold formation, off colors, and odors. These conditions can lead to refusal and may even cause respiratory issues in livestock.

Rogers suggests the best way to combat heating is to control moisture at baling. Aim for 20% moisture or less in small square bales and 16% to 18% moisture in large square or round bales. Then, store bales properly to mitigate risk even further.

“Avoid indoor storage of high-moisture bales as spontaneous combustion can occur,” Rogers asserts. “When storing outdoors, stack bales in rows with space in between the row to allow for air flow. Store bales in a way that allows the escape of excess moisture from hay and allows a continuation of drying.”

Test hay before feeding, especially if moisture content was high at baling. It may be necessary to adjust supplementation if nutrients were lost due to heating.

“Excessive moisture at baling leads to bale heating and a potential reduction in crude protein and TDN, as well as an increase in fiber density,” Rogers summarizes. “The only way to know what these exact losses are is to test hay. As they say, without a test, it is only a guess.”

Amber Friedrichsen served as the 2021 and 2022 Hay & Forage Grower summer editorial intern. She currently attends Iowa State University where she is majoring in agricultural communications and agronomy.