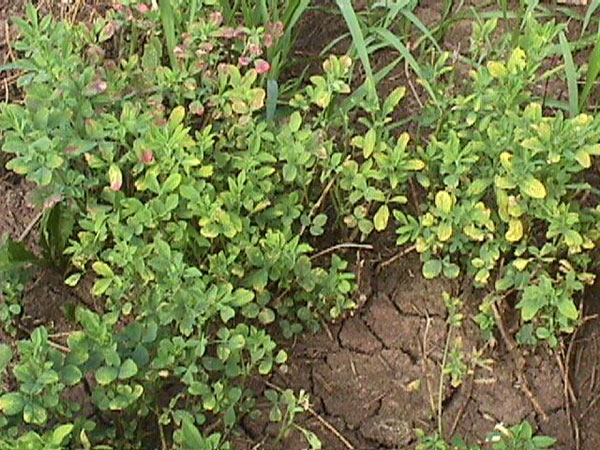 The potato leafhopper sneaks into alfalfa like a thief in the night. There’s no sound, no warning, no leaf chewing, no predictive growing degree unit chart, just the aftermath carnage of yellow-tipped alfalfa leaves and often a significant yield reduction. The dog days of summer are right in their wheelhouse and the prudent alfalfa grower will need to keep a keen eye for leafhopper arrivals as they ride in on each passing storm front.

Here are four axioms that most every alfalfa producer can take to heart:

1. Potato leafhoppers will arrive every year, though numbers will vary.

3. If populations are high, alfalfa yield will be cut significantly, especially on already stressed stands.

4. Potato leafhoppers suck — in more ways than one.

Brian Lang, Iowa State University extension field agronomist, recommends to first scout seven to 10 days after cutting. “A simple threshold rule that still basically holds true is one or more potato leafhoppers per inch height of alfalfa per 10 sweeps. In other words, if you take 10 sweeps on 4-inch-tall alfalfa, you reach threshold if there are four or more potato leafhoppers in the net,” Lang says.

The agronomist notes that treatment thresholds are based on a 15-inch diameter net and taking about a 3- to 4-foot sweep across the alfalfa canopy with the edge of the net about halfway into the canopy. “If potato leafhoppers are present, they are easy to kill,” Lang says. “The lowest labeled rates work very well on this pest. Also scout the new seedings, including those with oat nurse crops. The same pest thresholds apply.”

Kelly Tilmon, Ohio State extension entomologist, emphasizes that vigorous alfalfa can tolerate more potato leafhopper pressure than stressed stands. “With some of our drought-stressed new seedings made this year, consider lowering the threshold to half of normal,” she states in a recent edition of Ohio State’s C.O.R.N. newsletter. “Those slow-growing new seedings may not offer a yield response from treatment in the current growth cycle, but protecting those plants will help ensure taproot development and future yield potential.”

The potato leafhopper’s weapon of choice is a dagger-like stylet that is inserted into the alfalfa stem or leaf. Once inserted, the sucking of sap (carbohydrates) out of the plant begins.

Saliva from the leafhopper causes phloem tissue (the plant’s pipeline for moving carbohydrates from the leaves to the roots) to compress and restrict flow within the tubes. It’s thought that stem feeding, and the subsequent buildup of leaf sugars because of phloem tissue closure, is actually more responsible for the symptomatic leaf yellowing (sometimes referred to as hopperburn) than the leaf feeding itself. Once leaf yellowing is visible, the damage has already been done.

Through the remainder of the summer, develop a management plan to monitor potato leafhoppers. There’s simply too much economic downside in lost yield, forage quality, and stand persistence not to do so.

It’s fescue toxicosis on steroids Next

Please — Step back from the bunker Previous