Taking a shot at the grazing game

The author is the 2021 Hay and Forage Grower summer editorial intern. She currently attends Iowa State University where she is majoring in agriculture and life sciences education-communications with a minor in agronomy. 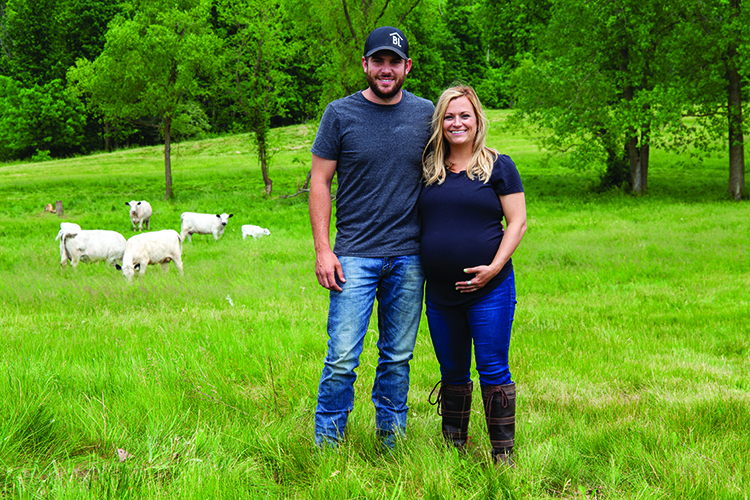 While I have stepped onto many pastures before, I have only ever set foot on a golf course once. Yet, there I was, adding another tally to both experiences at the same time as I followed Travis and Marissa Hake through the gate of Black Label Farms near Edon, Ohio.

At first glance, I envisioned the activities that once took place on the abandoned course: golfers walking up and down the rolling hills, golf carts cruising pieces of sidewalk that still remain, and a golf ball hitting its peak in the air and then descending into a pond at its owner’s dismay. At second glance, though, I was awakened from my daydream and brought back to reality as I found myself nose-to-nose with some of the most docile cattle I’ve ever encountered.

Located in the heart of western Ohio’s corn and soybean breadbasket, the Hakes struggled to find affordable land to purchase for pasture. That is, until a 100-acre golf course was put up for sale practically in the Hake family farm’s backyard. Now, tee time is all the time for the couple, but they are not practicing their putt or strengthening their swing. Instead, they are working to transform what was once 18 holes of fairways and greens into a home for their grazing herd of British White Park beef cattle.

A few years ago, the golf course went up for sale and was sold at an auction. The man who purchased it had intentions of flipping it to sell at a higher price, but unfortunately for him, no such thing happened before he passed away. His estate closed and the course was back on the market. This time, the Hakes had the highest bid.

“It’s tough around here because we are in heavy row-crop country,” Marissa said. “This property came up, and we farm on three sides of it, so it was almost the perfect situation for us when looking for pasture because we don’t have to compete against row-crop land prices.”

Although obtaining the patch of land seemed on par — pun intended — the condition it was in was double bogey quality. The land had become overgrown with mature, dead grass during the time it sat idle. Nonetheless, the Hakes played through.

“The first thing we did was mow it all and bale the grass to get all the old residue off,” Travis said. “Next, we started researching the species of what we had, what we wanted, and the steps to get there.”

What they had was a lot of tall fescue and Kentucky bluegrass. The Hakes realized this was less than ideal when developing a diet for their animals. They set out to introduce more forage species into their field. Early this spring, the Hakes frost seeded three species of clover into their pasture to add a legume component and fix nitrogen in the soil.

The Hakes plan on frost seeding annual and perennial clovers every year. They will also be interseeding other forages such as timothy, ryegrass, and orchardgrass into the turf a couple of fairways at a time. Years of undermanagement left the course looking unkempt. One advantage of this, though, is that there are many thin spots of grass that allow new seeds to establish quickly.

“Our goal was to transition over to more desirable species without completely terminating the grass,” Travis said. “I think the best thing would be to kill the grass and start over, but that wasn’t an option for us. We had cows waiting at the gate, and we had to learn how to utilize it.” And utilize it they did. 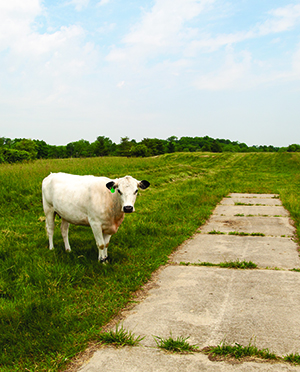 There are currently about 30 pairs of cows and calves grazing on the course. Despite a limited variety of forages for now, the herd will not have a problem meeting their nutritional needs. The couple decided to extend the perimeter fence beyond the course and around parts of neighboring fields they own. These areas were less desirable for row-crop production. The total area inside the new fence is approximately 130 acres, and it includes access to some alfalfa and cover crops, which help supplement the golf course’s forage grasses.

Before the new fence installation could take place, two property lines around the golf course had old fences that needed to be removed. Once the perimeter was cleared, the Hakes contracted to put in a new six-wire, high-tensile fence anchored by treated wood posts around the entire area.

Another six-wire fence was installed to divide the pasture in two. This way, the Hakes can potentially have two separate cow herds on the course. Within these sections, the couple rotates their herd with a single strand of movable polywire.

Travis plans on more fencing in the future. He wants to dedicate more adjacent agricultural land to the pasture to allow cattle greater access to cover crops. “The goal is to utilize this piece of property the best we can,” he said. “Maybe we will install another paddock or two and add more permanent fencing around more agricultural fields to rotate cows into cover crops following grain harvest.”

Fences? Check. Improved forages? Check. But what about water?

Ponds that once menaced mediocre golfers now serve as water sources for the cattle. The cattle drink from two ponds on either side of the course, one of which is filled via a well with tanks that overflow into it.

Travis wants to install more well-fed tanks near other ponds and underground water lines throughout the pasture. This will enable the Hakes to rotate their herd more often and make use of smaller paddocks.

“Well-fed tanks that overflow into the ponds allow for the freshest water for cattle by cycling new water into our stocked ponds,” Travis said. “We have a very good well to utilize near the ponds from the course’s old irrigation system.”

If farming is a heritable trait, Travis is definitely a carrier. He is a seventh-generation farmer working alongside his father, uncle, and brother. They farm approximately 3,500 acres of row crops, not including custom work they do for a neighbor. The family also runs a backgrounder business of about 1,800 dairy-cross steers, which they raise and sell to a feedlot.

Travis also operates a feedlot of his own. He has 200 cattle that are grain-finished, processed and inspected locally, and sold direct-to-consumer. The meat products are being sold in nearby butcher shops as well.

Marissa obtained her doctorate of veterinary medicine from Michigan State University, where she and Travis first met. Her animal health expertise is a valuable asset to the operation. She also currently works as the animal welfare director for fairlife LLC, a national milk processing company. She oversees the welfare programs for all the company’s providing dairies. When Marissa is not on the home farm, she can be found traveling to fairlife suppliers in various states, including Arizona and New Mexico.

Although the couple had plenty to keep them busy, they wanted something to do together on the side, which is why they started grazing cattle on a golf course.

“It kind of started out as having five cows as a backyard hobby,” Travis said. “Then it grew into an opportunity to buy a bigger herd, and we’ve had good results selling seedstock. It’s been a pretty good business, and it just keeps growing.”

A unique pasture calls for unique cattle, and the Hakes’ herd of British White Parks meet that description. Animals of this breed are known to have bright white bodies, which seem to glow against the green hills of the golf course. When a cow or calf lifts its head from grazing, two black ears and a black nose appear to greet any bystanders.

“I really like the look of the breed — that’s what initially drew me to them,” Marissa said. “Then we really started looking into it and found they are efficient on grass, are good mamas, and are pretty docile. That is exactly what we wanted.”

Docile is an understatement. Many of the cows kindly approach anyone who comes to visit, or at least they don’t run with tails raised for the par four ninth hole.

Even though the golf course to pasture transformation is just beginning, the Hakes are excited for their future. Their story goes to show that some long shots end up being a hole-in-one.

This article appeared in the Aug/Sept 2021 issue of Hay & Forage Grower on pages 6 and 7.

He uses every possible forage tool Next

Dewing it the small way Previous