Let LEAF be your guide to alfalfa leaves

Weakley is the director of dairy forage nutrition for Forage Genetics International (FGI) in West Salem, Wis. Rodgers is a senior alfalfa breeder with FGI 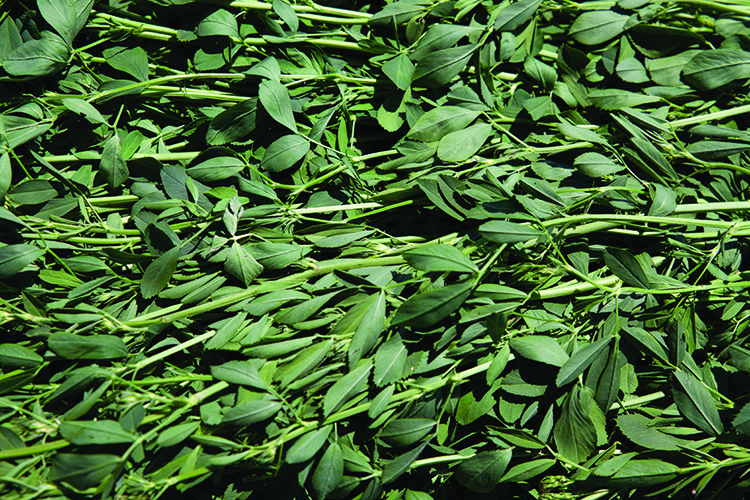 How often have you harvested a beautiful field of alfalfa or a newly established stand of a high-quality variety of alfalfa, only to find out later that the lab test results were only average?

Rather than assuming you received inaccurate lab test results or did not obtain the promised benefits from the high-quality alfalfa variety, perhaps the lower than expected lab test was the result of leaf loss.

Leaf loss is one of the major factors negatively impacting harvested alfalfa forage quality. University of Wisconsin research has shown that leaf percentage accounts for 71% of the variation in forage quality. Leaves have a relative forage quality (RFQ) of approximately 550, while stems have an RFQ of only 70 to 80. Therefore, growers must know the percent of leaves in their alfalfa to better manage growing, harvesting, and evaluating their alfalfa.

While there are many forage quality measurements we can perform on alfalfa, until now there has been no reliable rapid test to predict the amount of leaves in a sample of alfalfa that is typically dried, ground, and analyzed in a lab. Researchers at Forage Genetics International (FGI) decided to develop such a test.

During the summer of 2019, 160 samples of standing alfalfa plants were collected from FGI research plots at West Salem, Wis.; Nampa, Idaho; and Davis, Calif. Across all locations, a total of 43 varieties of alfalfa were harvested similarly using a variety of cutting schedules (28, 33, 35, or 38 days) across a range of cuttings (first through third).

Plants were sent to West Salem where they were dried at a temperature less than 140°F, followed by hand separation and weighing of leaf and stem fractions. After recording the weights, the two fractions were recombined and ground over a 1-millimeter (mm) screen. From there, they were forwarded to the FGI in vitro digestibility lab at Gray Summit, Mo., for Calibrate High Quality (HQ) Forage Analysis testing. This included near infrared reflectance spectroscopy (NIRS) and “wet” lab analysis for dry matter (DM), ash, crude protein, neutral detergent fiber (NDF), and 28-hour in vitro NDF digestibility (NDFd28).

These values were then compared with the percent leaf fraction in each sample in a stepwise regression analysis approach to develop an equation to predict percent leaves from the best-fit component models.

During the following year (2020), 40 new whole plant samples were collected from the Davis and West Salem research locations using similar methods to the previous year. Those samples were run through the same protocol to be used to validate the accuracy of the percent leaf prediction equation developed in 2019.

The findings from the 2020 validation set of 40 samples showed that the standard error of the prediction was extremely low (2.86 percentage units of leaves) across a wide range of 35%

to 64% leaves in the samples. This indicated that the leaf prediction equation can be “off” by an average of only 2.86 percentage units of leaves on a given sample.

These 40 samples were added to the original 160 samples and a new prediction equation, LEAF (Leaves Enhance Alfalfa Forage), was developed that predicts percent leaves in alfalfa from NDF, protein, and NDFD28 measured in the sample. This equation explained 84% of the variation in leaf percentage in these samples (see Figure 1). 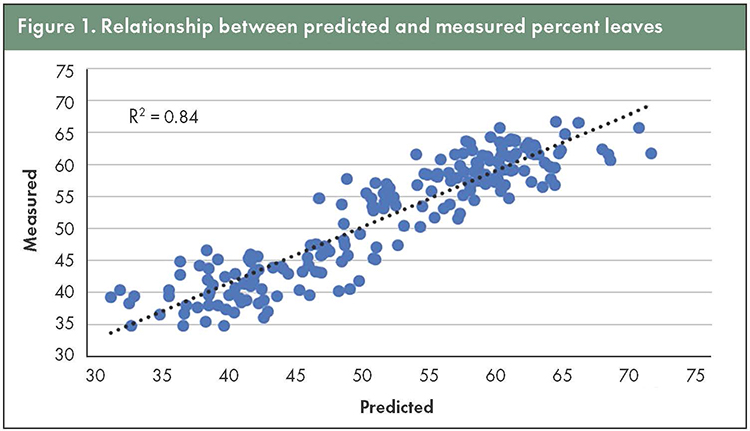 The LEAF equation was used to predict the leaf percentage of 360 samples of alfalfa that were collected during 2019 from across the U.S. and analyzed by FGI. The samples represented a wide range in quality, from 16% to 67% NDF, 8% to 30% crude protein, and 34% to 62% NDFD28. The predicted leaf percentage ranged from 10% to 77%, with an average of 48% (SD of 12.6%; Figure 2). Across both sets of data, the average leaf percentage in alfalfa was approximately 50%, with a SD close to 10%. Therefore, two-thirds of the sample population had a leaf percentage between 40% and 60%, which could be considered a “typical” range. 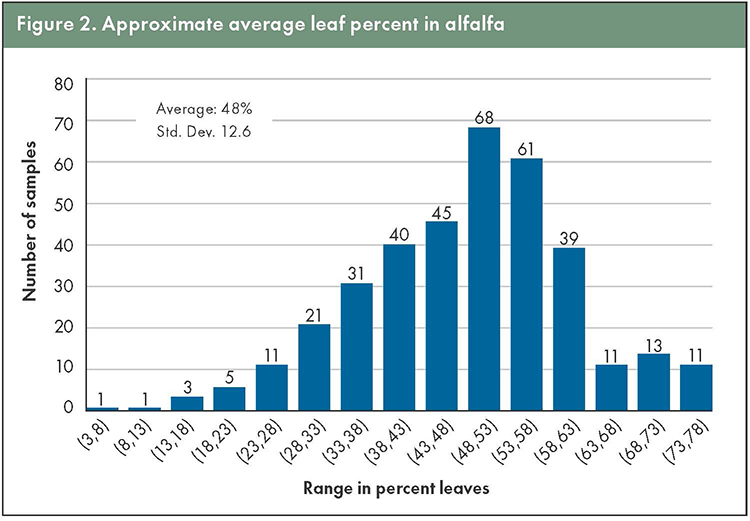 With this in mind, we went a step further and compared the relationship between RFQ and LEAF percent in the 360 samples from 2019. As can be seen in Figure 3, leaves influenced RFQ in a positive manner with a strong relationship. The equation from this relationship was then used to predict the RFQ at various levels of LEAF percent in alfalfa around the average of 50%, which was obtained from the two datasets (Figure 3). 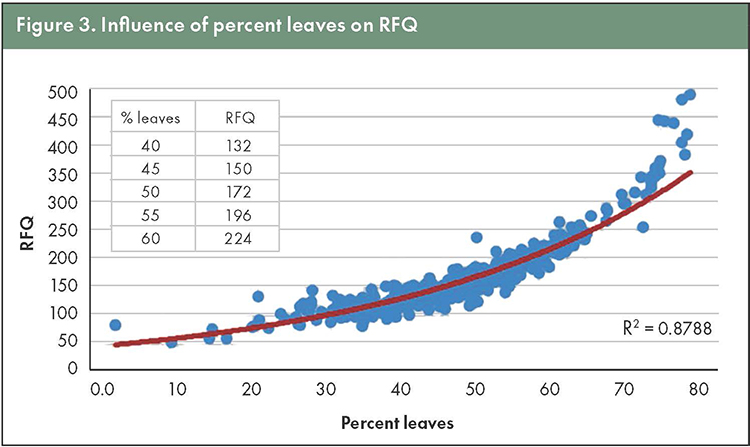 The graph shows the increasing return in RFQ value that can be gained from improving retention of leaves during growing and harvesting of alfalfa. The other discovery is that over the range between 40% and 60% leaves, each 1 percentage unit improvement in leaves resulted in a 4.6-unit bump in RFQ.

What this indicates is that it takes only a little more than 2% additional leaves to raise the RFQ of a bale of alfalfa by 10 units. This emphasizes the importance that leaves play in the quality of alfalfa forage and why it is worth spending the extra effort to not lose leaves from the field to the mouth of a ruminant animal.

The following is just a brief listing of factors affecting leaf loss in alfalfa:

• Fungal and other alfalfa diseases

• Rake type, excessive raking, or raking when the alfalfa is less than 40% moisture

• Grinding or excessive mixing of hay before feeding

Use the LEAF percent value to identify and measure a major source of quality variation in alfalfa. This will result in a more objective conversation when discussing alfalfa sample quality test results.

• If the LEAF percentage is less than 45%, evaluate areas for alfalfa management improvement.

• Consider options such as fungicide application, using more disease or pest-resistant alfalfa varieties, and don’t forget the many harvest management improvements that can be put into action.

The LEAF test has not been validated with alfalfa-grass mixed forages and is currently intended only for pure stands of alfalfa. Furthermore, the LEAF test has only been validated against nutrient inputs from the Calibrate High Quality Forage Analysis Test. Lab variation in these nutrient input measurements from other forage tests could likely affect the accuracy of the percent leaf predictions if they were used as replacement values in the LEAF test.

Fall alfalfa decisions have repercussions Next