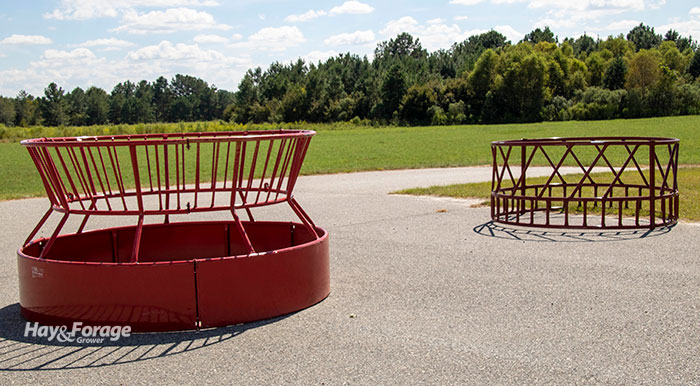 At this point in the year, the temperature has dropped, forage production has slowed, and the grazing window is closing. While many producers will rely on large round bales to feed their herd, the strategies they use to do so could impact their cost of production.

David Lalman with Oklahoma State University Extension says large round bales can be fed by rolling them out or by placing them in a hay feeder. The former encourages a better distribution of hoof traffic in a pasture, which can lessen soil compaction and plant damage. Unrolling bales can also improve soil fertility as manure is dispersed throughout a field.

Hay waste also adds nutrients and organic matter to the soil; however, production costs will start to rise as more material remains on the ground. Lalman says despite the advantages of unrolling bales, this practice can sacrifice significant amounts of feed.

“Hay waste is basically a function of the amount of hay provided per animal each day,” the extension beef cattle specialist explains. “If two or more days’ worth of hay must be fed at a time, expect hay waste to exceed 25% of the original bale weight.”

Utilizing a hay feeder can cut down on some of this waste, but the amount of hay that can be salvaged depends on the feeder’s design. Lalman advises against settling for simple ring feeders even though they can be convenient and inexpensive.

“The low original cost and light construction come at an expense of hay feeding efficiency,” Lalman states. “Researchers have consistently documented 19% to 21% waste, expressed as percentages of the original bale weight, when these open feeders were used.”

Feeders with solid sheeted bottoms limit animals’ access to the top half of the bale and restrict them from dragging hay onto the feeding area. These designs have been shown to reduce dry grass hay waste down to 12% to 13% of the original bale weight.

The range can fall to between 3.5% and 8% when basket or cone mechanisms are also used in feeders with a solid sheeted bottom design. Lalman says these devices hold a bale in the center of the feeder. When the bale eventually collapses, a basket mechanism catches the hay and creates a feeding space for cattle, further preventing waste.

One drawback to hay feeders with these features is their initial cost, which is considerably higher than feeders with an open design. Efficient feeders can also be much heavier, which makes it more difficult to move them to different locations.

Tractors with loaders or a hydraulic truck bed are required to place bales in hay feeders. Additionally, Lalman points out feeders with cone mechanisms can limit the amount of hay available to smaller calves. Overall, he suggests producers compare the cost of efficient hay feeders to that of other, less expensive alternatives.

Swath-graze cattle to save and gain Next