By Eric Young
Today’s corn silage hybrids offer high yield potential but can vary substantially in nutritional quality depending on genetics and the growing environment. Dual-purpose, leafy, and brown midrib (BMR) hybrids are the three main types of corn on dairy farms producing corn silage.
Dual-purpose hybrids were designed for grain or corn silage production and generally have moderate fiber digestibility with high grain potential. While 30-hour (hr) neutral detergent fiber (NDF) digestibility for dual-purpose hybrids can vary by more than 10 percentage units in different growing seasons, fiber digestibility generally varies minimally (2 to 5 percentage units) when dual-purpose hybrids are grown in the same location.
Francis Glenn (Glenn Seed Ltd, Blenheim, Ontario, Canada) developed the first leafy corn hybrids in the 1980s with the idea of producing a high-quality corn silage crop to feed dairy cows. These days, Glenn’s foundational seed lines are used by companies in the U.S., Canada, and around the world. Leafy hybrids have at least eight leaves above the ear and a lower ear placement on the stalk compared to dual-purpose. Current breeding efforts are focused on developing full floury kernel texture to boost starch availability.
BMR is digestibility king
The BMR mutation in corn was discovered in 1924. It took nearly 40 years to realize that the BMR trait confers lower lignin content and greater fiber digestibility. There are four known BMR mutations that differ in agronomic traits. Dow AgroSciences (Mycogen Seeds) utilizes the bm3 gene, while DuPont Pioneer uses the bm1 gene. In general, trials show that BMR has more milk yield potential per ton than non-BMR but at the expense of lower average dry matter (DM) yield. BMR is typically 8 to 12 percentage units higher in 30-hr NDF digestibility than non-BMR.
Dairy farmers and nutritionists are interested in the agronomic and nutritional differences between bm1, bm3, and non-BMR hybrids and their fit in rations for optimizing farm profitability. Feeding trials have shown BMR can result in greater milk production when fed in rations; drawbacks include lower yield and a higher seed cost. Few studies have looked at yield and quality of bm1, bm3, and non-BMR.
With funding from the Northern New York Agricultural Development Program, Miner Institute conducted a trial to evaluate yield and quality for bm1, bm3, and non-BMR hybrids in 2015. Hybrids were arranged in a randomized complete block design with four replicated strips per hybrid (six rows, 500 feet length) and planted at 34,000 seeds per acre. Relative maturity ranged from 95 to 107 days, and all plots were harvested on the same day (October 2, 2015). Identical hybrids were grown at a cooperating dairy farm located approximately 25 miles south of Chazy, N.Y. (Adirondack Farms, LLC) to serve as a comparison.
In addition to yield and moisture content, fresh chop and fermented samples were analyzed for a range of forage quality measures, including total fiber [acid detergent fiber (ADF) and NDF], crude protein (CP), soluble protein (SP), 30-hr NDF digestibility expressed on an organic matter basis (NDFD30om), lignin, starch, 7-hr digestible starch (starchD), and undigested NDF (uNDF) content measured after 30, 120, and 240 hours of in vitro digestion. 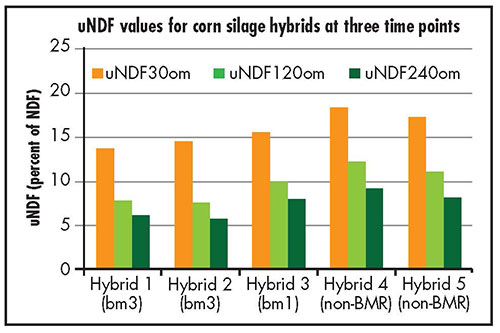 NDFD30 varied significantly among BMR and non-BMR, with nearly a 10 percentage unit advantage for bm3 compared to non-BMR. There was no difference on NDFD30 between bm1 and bm3. BMR lignin content (1.8 to 2.0 percent of DM) was significantly lower than non-BMR (2.5 to 2.6 percent), with no differences between bm1 and bm3.
Fiber digestibility or indigestibility of corn silage affects feed intake, rate of forage particle breakdown, ruminal turnover, and milk production potential. In rations with more than 40 percent corn silage, a recent study showed that milk potential improved by nearly one-third pound per day for each 1 percentage unit bump in NDF digestibility.
Fresh chop samples were used with MILK2006 to provide a relative hybrid ranking for milk potential (see table). Milk per ton was highest for the two bm3 hybrids, followed by the bm1 and non-BMR. Factoring in both quality and yield (milk per ton multiplied by yield) results in a different ranking. While  one of the bm3 hybrids still ranked number one in milk per acre, the non-BMR hybrids ranked second and third.
Sorting out uNDF
Indigestible or undigested fiber (uNDF) is becoming a more popular forage quality measure. Since uNDF is a more uniform feed fraction than NDFD, it has a predictable digestibility (zero) and can be used to estimate fast and slow fiber digestion pools to fine-tune rations. The next version of the Cornell Net Carbohydrate and Protein System (CNCPS) model will have the capability to utilize uNDF time points to formulate rations.
Our uNDF results supplied additional information on silage quality. For example, uNDF30 was significantly lower for the BMR hybrids and did not differ among them. However, uNDF measured at later time points (such as uNDF120 and uNDF240) showed differences between bm1 and bm3 (see figure).
Bm3 had significantly lower uNDF120om compared to bm1 and non-BMR, and there was no difference in uNDF120om between bm1 and non-BMR. The bm3 hybrids also had significantly lower uNDF240om compared to bm1 and non-BMR. While lower uNDF values imply greater whole plant fiber digestibility at any given time point, rates of digestion are derived from curve fitting based on the three time points and would better capture overall fiber digestibility of the hybrids.
Make wise choices
Distinct and significant differences in quality among BMR and non-BMR hybrids were found in our study. Results highlight the importance of wise hybrid selection and forage analysis when formulating rations.
We found that uNDF was a good indicator of fiber quality and may be a useful measure to include for ranking hybrids based on milk production potential. Future research will calculate digestion rates of the hybrids based on fast and slow fiber pools, and evaluate milk production potential using CNCPS.
The bottom line is that a complete estimate of a corn hybrid’s nutritional value will be based on the content of starch and its digestibility, plus the content of fiber and its digestibility or indigestibility. Year two of this trial is currently underway.

This article appeared in the August/September 2016 issue of Hay & Forage Grower on pages 43 and 44.