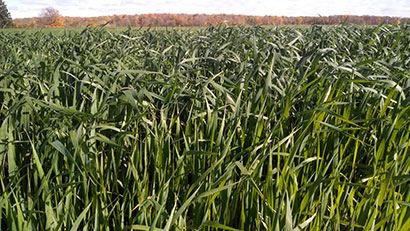 Though we'll never reach the 40 million mark again, or anywhere close to it, oats have found a nice niche as a relatively high-quality, high-yielding fall forage crop for the north and central latitudes of the U.S. (or winter crop in the South). Though baling in the late fall is a stress inducer, either grazing or cutting and harvesting as oatlage is becoming a more common occurrence on farms.

Stanley Smith, program assistant for Ohio State University Extension in Fairfield County, discussed that state's experience with fall forage oats in last week's Ohio BEEF Cattle letter. He correctly points out that this year's wet weather in many regions has left a need for additional high-quality forage on many livestock farms. Oats may be a partial answer if there is land available for planting in late July to early August.

Don't think of late summer-sown oats in the same way you think of spring-sown oats. They're two different forages when cut near the boot or early heading stages (if the fall oats produce a head at all). Whereas spring-sown oats begin under cool conditions and finish under warm temperatures, it's just the opposite for late summer-sown oats. Oats harvested or grazed in the fall have significantly lower fiber levels, higher amounts of water-soluble sugars and a much higher level of total digestible nutrients.

Planted in early August and harvested about 75 days later, oats will yield 2 to 3 tons of dry matter per acre. Ensuring an adequate amount of nitrogen is available to the crop is crucial to obtain high yields and forage quality. Oats grown on nitrogen-deficient soils will be a disappointment. Generally, 40 to 60 pounds of nitrogen per acre will be needed unless manure is applied prior to seeding or you know there will be carryover nitrogen available from a previous crop. Fields that have been extremely wet through much of 2015 will likely be very low in available nitrogen from denitrification or leaching losses.

Most university extension personnel can provide specific information for growing fall oats in the various states. Though the popularity of fall oats is growing, it is still an underappreciated forage resource.

Winter ponderings about winter rye Next