The author is the director for agriculture education, research, and development at Columbia Basin College in Pasco, Wash.

The outcrossing nature of alfalfa and dependence on insects for pollination makes gene flow a common phenomenon. The situation became even more complicated with the deregulation of genetically engineered (GE) alfalfa in 2011. The first GE trait was resistance to glyphosate. A second GE trait with reduced lignin was marketed in 2014.

Even before GE alfalfa was deregulated in 2011, the alfalfa industry had been developing and refining coexistence strategies facilitated by the National Alfalfa and Forage Alliance (NAFA). For this article, we use the coexistence definition put forward by Dan Putnam, forage specialist at the University of California-Davis: “Successful coexistence is the ability of GE, organic, and non-GE to thrive without undue influence of neighbors or resorting to extraordinary protection measures.”

NAFA worked hard to foster the coexistence of GE, conventional, and organic alfalfa production by developing a set of best management practices that aimed at limiting the adventitious presence of GE traits in conventional seed. Adventitious presence refers to the unintentional incidence (contamination) of a particular GE trait in seed lots. The main objectives were to minimize gene movement by controlling inadvertent admixture or gene flow using practices that ensure seed is pure, sanitation is prioritized, spillage is minimized, and cross-pollination is prevented.

However, the success of coexistence is dependent upon grower adoption, which had not been monitored. To assess adoption, Stephanie Greene (USDA-ARS scientist with the Plant and Animal Genetic Resources Preservation Research Unit at Fort Collins, Colo.) and myself surveyed 530 alfalfa hay and seed producers in three major alfalfa production areas (Fresno County, Calif.; Canyon County, Idaho; and Walla Walla County, Wash.) in the western United States in 2013.

Based on a 33 percent response rate, we found that although many respondents reported practices that supported coexistence, the survey identified differences in grower perception and practices in the three states surveyed that may undermine coexistence. An important industry coexistence practice is to test seed before planting. We found only 4 percent of growers tested their seed before planting. Though 35 percent of growers in Washington reported they export alfalfa, no respondents indicated they tested their seed.

Contamination can readily occur when GE seed is advertently mixed with conventional seed when planted or harvested. Seed escape can aid as an avenue for the establishment of glyphosate-tolerant feral plants. GE seed that escapes during planting and harvesting can result in GE plants that can contribute to gene flow. When growers were asked how likely it was for seed to escape during planting or harvesting, 87 percent reported seed escape was not likely or was impossible during planting, while 65 percent reported it was not likely during harvesting.

Contamination can occur if machinery is not cleaned thoroughly after seeding and harvest. Most growers appeared to diligently practice sanitation since only seven out of 88 growers replied they do not take any special measures for planting equipment. Sixty-six percent of respondents harvested conventional seed first and cleaned their combine between harvests to keep GE and conventional seed separate during combining.

Most respondents controlled feral plants, but control was limited to their own property. Growers tended to use herbicides and crop rotation to control alfalfa volunteers. Though herbicide use differed among counties, glyphosate was used by respondents in all three counties to control volunteer roadside plants. Use of glyphosate to control volunteer or roadside plants should be avoided in areas where glyphosate-resistant crops are grown. In Fresno County, a high number of transgenic feral plants have been found along roadways.

Gene flow from GE seed and hayfields to conventional hayfields have a very low probability of causing adventitious presence in hay since the forage is generally harvested before seeds mature. However, it depends on how hayfields are managed by growers. Harvest practices for hayfields varied in all three counties in terms of cutting time, frequency of delayed cutting, and occurrence of field obstructions that prevented cutting. 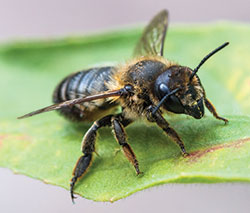 Leafcutter bees are widely used by alfalfa seed producers to pollinate their crop.
Gene flow issues are mainly a concern in alfalfa seed production since it is cross-pollinated by bees. Coexistence strategies were developed to curtail gene flow from GE fields to conventional fields so that adventitious presence remains at a level low enough to avoid a negative impact.

Moving leafcutter bee domiciles disorient most nesting females and enhance gene flow. Fifty-eight percent of California respondents reported that they moved hives from field to field, while only 8 percent and 14 percent moved pollinators in Idaho and Washington, respectively.

We can do better

The results of our grower survey suggested that further efforts are needed to educate hay and seed growers, both large and small farm holders, about gene flow and coexistence practices. This is especially important in areas where alfalfa is exported or where adventitious presence-sensitive alfalfa seed is produced.

Successful coexistence depends upon the widespread implementation of practices that reduce the gene flow by either seed or pollen. These practices will help ensure alfalfa producers can continue to target GE and adventitious presence-sensitive markets. Additional efforts may be necessary to educate growers about the value of testing adventitious presence levels in conventional seed in areas that export hay. Seed companies are routinely testing their seed lots to monitor the efficiency of best management practices for GE seed production. They are labeling seed as GE nondetect (less than 0.1 percent adventitious presence). This strategy would support coexistence, especially if adopted by all seed suppliers so grower choice is not impeded. Coexistence would be further supported if GE nondetect seed lots are available for the same cost as unlabeled seed.

To foster coexistence, growers must request nondetect alfalfa seed; control gene flow through distance; control and remove feral plants; avoid glyphosate application in adventitious presence-sensitive areas; clean their equipment before and after planting and harvesting; use sealed bins to avoid spillage while transporting; and harvest hayfields before they flower.

For additional information on alfalfa coexistence, visit the following websites:

This article appeared in the November 2017 issue of Hay & Forage Grower on pages 24 and 25.

We’re pricing hay all wrong Next