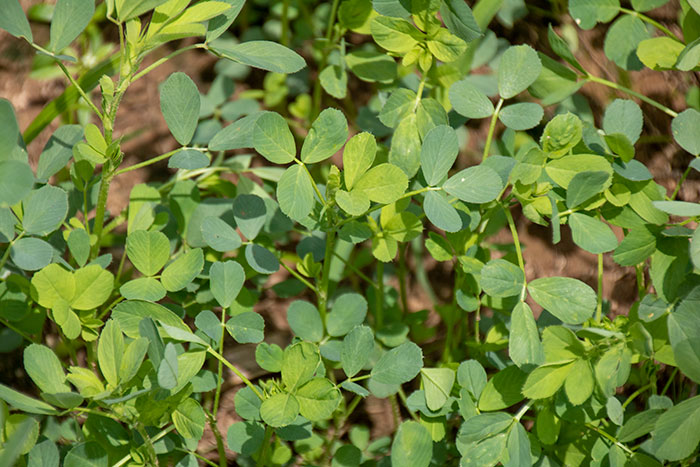 Alfalfa has long been a staple forage across most of the United States. That “most” could be changed to “all” if not for the Southeastern states where alfalfa has historically been a nonfactor in most forage systems.

Slowly but surely, efforts have been made to grow alfalfa successfully in the South. Plant breeding efforts by former University of Georgia forage breeder Joe Bouton and others have resulted in varieties that persist well in the Southeast’s harsh climate and soils.

More recently, a coordinated effort has been undertaken by researchers in Alabama, Florida, and Georgia to establish grazing recommendations for alfalfa-bermudagrass mixtures. The initial results of their work were presented and discussed on a Southeast Cattle Advisor webinar last week.

Why would a producer want to incorporate alfalfa into bermudagrass?

Kim Mullenix, an extension beef specialist at Auburn University, cites several reasons. “With such a system, growers are able to obtain higher yields brought about by more cuttings or grazings per year,” Mullenix said. “The alfalfa provides improved forage quality over bermudagrass alone and it can be harvested as hay, baleage, or used for grazing. Alfalfa also provides nitrogen for the grass stand,” she added.

These just aren’t perceived benefits. Jennifer Tucker, a research and extension scientist with the University of Georgia, described her results of a completed three-year study comparing the yield and quality of a bermudagrass monoculture to that of an alfalfa-bermudagrass mixture. By interseeding Bulldog 805 alfalfa into the bermudagrass, they were able to produce 25.7 tons of dry matter (DM) per acre over the three years. This was double the yield of the pure Tifton 85 bermudagrass field plots.

Having alfalfa in the mixture also extended the forage production season from March through October or November. The researchers were able to get six to eight harvests per year when alfalfa was interseeded compared to a typical four-harvest system for bermudagrass monoculture. Forage quality was also drastically improved in terms of crude protein content.

The new, ongoing research is evaluating grazing systems for the mixed stands of alfalfa and bermudagrass. Field trials were established at two locations in Alabama, Georgia, and Florida.

Preliminary data in Alabama and Georgia is indicating that mixed stands be grazed about every four weeks while leaving a stubble height of 4 inches. This was true in both the southern and northern locations of the two states. Grazing shorter than 4 inches or more frequently is having a detrimental effect on the alfalfa and bermudagrass stand, though initial yields may be higher.

It should be noted that the botanical composition of a bermudagrass-alfalfa stand will change with the time of year as more grass is present in the summer months.

“Crabgrass was a frequent invader into the mixed stands in both Alabama and Georgia,” Tucker said. “However, this won’t be a problem if we’re grazing because it is a desired forage for cattle. It is especially beneficial under drought conditions.”

She also noted that the alfalfa varieties being used, Bulldog 805 in the southern locations and Bulldog 505 in the north, are bred for high-stress conditions and are persisting well in the stands.

“I think the alfalfa-bermudagrass mix is a win-win combination because they complement each other so well,” said Jose Debeux, a forage agronomist with the University of Florida who is based at the North Florida Research and Education Center in Marianna.

Debeux noted that in his state there is more of a need to suppress the bermudagrass with glyphosate in the fall before seeding alfalfa. In the most southern location, Citra, bermudagrass may have to be suppressed again in the early spring following establishment. This is to ensure optimum alfalfa establishment without competition.

“Getting the soil to the proper pH is critical, and this may take some time because it has to be surface applied,” Debeux said. “Two to three applications may be needed in some cases. Optimum soil fertility is also necessary as it relates to phosphorus and potassium.”

Esteban Rios, a forage breeder at the University of Florida, is currently working to develop alfalfa varieties that are well adapted to central and south Florida. He’s currently in the process of increasing seed supplies of one such promising variety and hopes to soon be testing it at several locations in the Sunshine State.

Another research project team member, Chris Prevatt, has developed a budget analysis spreadsheet for the alfalfa-bermudagrass forage system. Prevatt is an extension specialist in beef cattle and forage enterprise budgeting and marketing. He noted that the keys to economic success for the grazing system hinge on alfalfa stand longevity, forage yield, and keeping production costs under control. The current research will aid farmers and ranchers in their ability to maximize these components.

Mullenix concluded the webinar by sharing some feedback from producers who have been successful in establishing alfalfa in Alabama. She noted that they emphasize the importance of picking the right field and reducing plant competition as the alfalfa is establishing.

The next steps for the researchers are to investigate the practicality of stockpiling alfalfa-bermudagrass mixtures in the fall and to study dual purpose cut and graze systems with the mixed forage.

Checking in on reduced-lignin alfalfa Next

Checking in on those new alfalfa seedings Previous