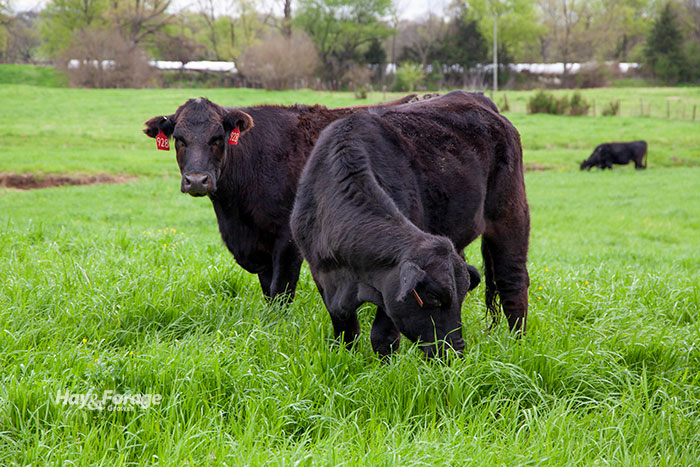 While on a recent barnstorming journey from southern Wisconsin to southern Arkansas, I was able to make some spring pasture observations both from the vehicle window and while walking across numerous pastures at planned stops along the way.

Spring pastures offer some unique challenges with plenty of opportunity to both manage and mismanage. I saw both.

Pastures ranged from still mostly brown in the North to lush, green annual ryegrass explosions in the South. I thought I’d share a few thoughts from the trip.

As I drove through central Missouri, tall fescue began to dominate the landscape. In most cases, cows were wandering across vast acreages of the grass that had just recently broken dormancy. This reminded me that the most common form of pasture management in the Fescue Belt remains that of continuous grazing with little regard for rotation or polywire.

In northern Arkansas, it was more of the same, although I did see a nice field of novel endophyte tall fescue. My host told me that there were several such fields in his county but that most producers simply viewed establishment costs as too big of an investment. 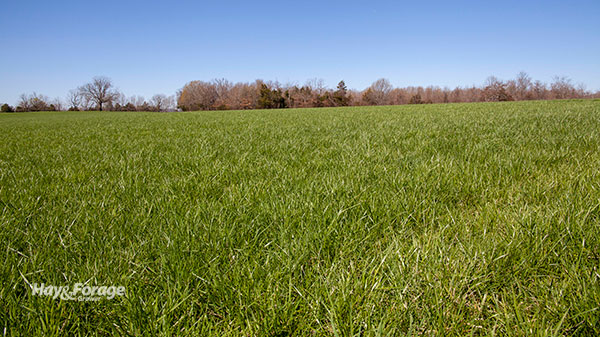 Perhaps one of the best ways to mitigate some of the effects of toxic tall fescue is to establish legumes into tall fescue pastures, which was being done in some cases, but it still can’t be classified as a common practice. This was partially due to the need for broadleaf weed control, which eliminates any clover in the stand. Further, a growing number of cattle producers are enjoying the convenience of applying fertilizer impregnated with herbicide to control broadleaf weeds.

I visited several farms where winter annual small grains were successfully being used for early spring forage. In most cases, this was being done by seeding into perennial warm-season pastures or in a dedicated field that was established last fall.

The biggest mistake I saw with some of these cereal pastures was overgrazing. By not leaving enough residual biomass, regrowth on those pastures was going to be slow.

Once far enough south, most pastures were simply an explosion of fall-seeded ryegrass, with Marshall being the clear variety of choice. Unlike many of the short tall fescue pastures I’d seen, most of these ryegrass pastures were being rotated on a regular basis to make the best use of the vast amount of forage being produced.

Annual ryegrass, of course, offers exceptional quality, and the winter and spring-born calves, along with their mothers, were thriving on these pastures. The same could be said for the fall-calving herds. 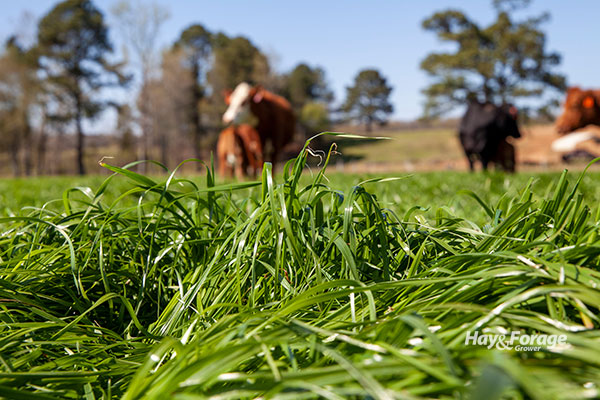 This ryegrass pasture provided for happy cows and calves.

“After going through the drought years of 2011 and 2012, we knew we had to do something different."

That comment, or a similar retort, was something I heard from three unrelated producers. Even more interesting was the fact that all three producers essentially came up with the same answer — ryegrass baleage.

In addition to ryegrass pastures, all three producers had dedicated fields of ryegrass that were being left for cutting and rolling into baleage. All were using in-line wrapper systems. It’s been this baleage that all three producers claimed were a major positive turning point for their operations. A couple of them also were making baleage from their warm-season perennial (bermudagrass and crabgrass) fields.

Talking to these producers was like going to a university-sponsored baleage seminar. They had all made mistakes but were now humming on all cylinders. There was no talk of saving money on wrap as each used at least six layers, even more if they were wrapping low-moisture (20% to 30%) baleage. 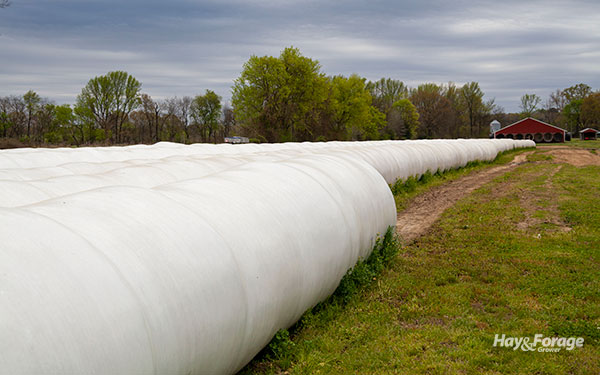 Baleage was a key drought mitigation strategy for many producers.

There were plenty of bright yellow fields to be seen on my journey. Buttercup had seemingly taken over the unimproved landscape and was doing the same to many improved pastures where some control measure hadn’t been taken.

This is a relatively easy weed to control with several herbicide options available, but it’s best done in the late-winter or early spring. Herbicide applications must be done early while plants are still vegetative. Even where previous applications had been made, it seemed a second flush of weeds were compromising some pastures.

Also seen in abundance through my car window was broomsedge. This is a weed that is often reduced or eliminated by simply getting soil pH and fertility to recommended levels. It seems that situation isn’t the case for many pastures. 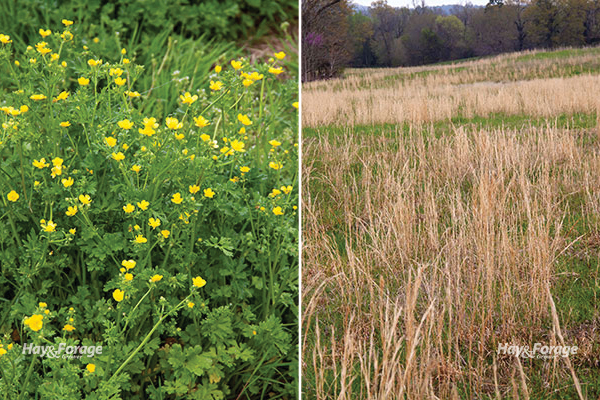 Several cattlemen I talked to were all in on crabgrass. It was being both grazed and harvested as dry hay or baleage. Interestingly, none of these producers had actually seeded crabgrass into their warm-season pastures. Nevertheless, they truly valued its dominant presence.

Let legumes provide your nitrogen Next