By Earl Creech, Carson Roberts
Creech is an associate professor and extension agronomist at Utah State University. Roberts is a graduate research assistant and master’s degree candidate at Utah State. 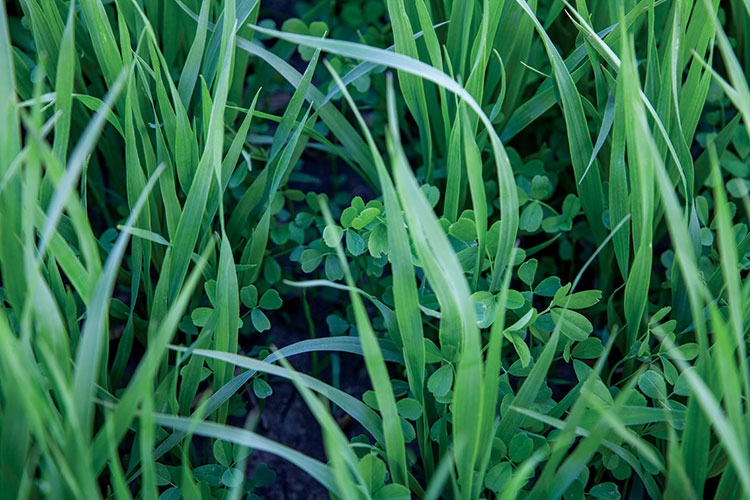 A critical component of profitable alfalfa production is the need to establish a dense, vigorous stand. In annual crops such as corn and wheat, a poor stand can haunt a farmer for a season, but the opportunity to establish a new and better stand comes the next year.

With alfalfa, it is common for stands to remain productive for four to six years or longer. A poor stand not only hinders forage yield and nutritive value during the establishment year, but also for many years to come. Any mistakes made in stand establishment are nearly impossible to correct later and ultimately shorten the life of the stand.

Multiple years of research at Utah State University have shown an approximately 70% reduction in weed growth through the use of an oat companion seeded at 10 pounds per acre. In those same studies, oat companion crops generally improved first cutting forage yield in the seedling year by 1 to 2.5 tons per acre compared to alfalfa seeded alone (see Figure 1). 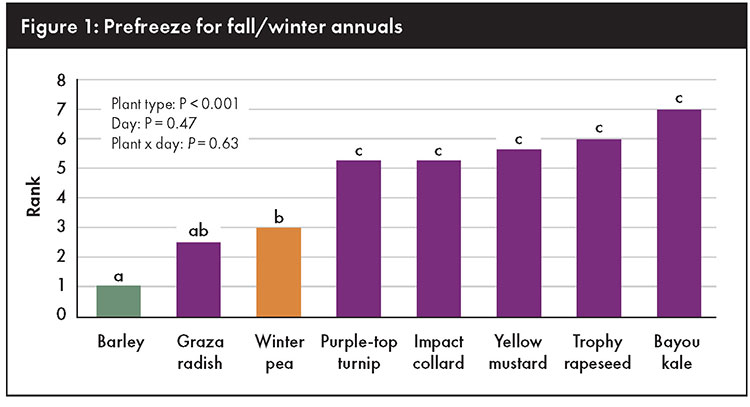 The risks associated with companion crops are the consequence of excessive plant competition with alfalfa seedlings. Once established, alfalfa is an excellent competitor, but as a seedling, it is not. Alfalfa takes months to develop the root structure and canopy sufficient to compete with other plants. In contrast, an oat companion crop can accomplish that same goal in weeks. To a young alfalfa seedling, the companion crop is a weed — an aggressive competitor for space, water, nutrients, and light.

The result of this competition is a reduced alfalfa stand with lower vigor, yield, and forage quality. Research in Utah has shown that higher forage yield with an oat companion in the first cutting compared to alfalfa seeded alone are followed by reduced yields in the cuttings that follow (see Figures 1 and 2). Furthermore, the use of a companion crop, even when well-managed, can reduce alfalfa yield 0.2 to 0.5 tons per acre each year over the life of the stand. 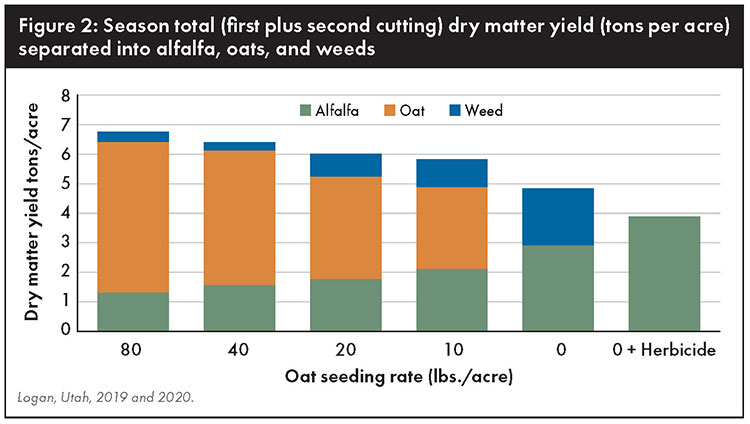 In most cases, the risks outweigh the benefits, so seeding alfalfa with a companion crop is not recommended in many cases. Exceptions might include fields with weed species and populations not well controlled with herbicides, areas prone to soil crusting or blowing sand where alfalfa seedlings need protection, or hay markets such as organic that reward oat-alfalfa mixtures and require no chemical use.

Choose the right species and cultivar. Although oats are typically the companion crop of choice, other species of small grains have been used. Species or cultivars of cereal crops that are short in stature, early to mid-maturing, and small leaved are desirable, as they allow maximum sunlight to reach alfalfa seedlings. Companion crops prone to lodging are a threat to smother young alfalfa and should be avoided.

Keep seeding rates low. The most common mistake with companion crops is seeding at too high of a rate. Pure oat stands for forage are typically planted at 80 to 100 pounds of seed per acre. If this high rate is used in a companion seeding, excessive competition will occur and a poor alfalfa stand will result. The challenge is to select a seeding rate that balances the need for maximum forage yield and weed suppression while causing minimal harm to the alfalfa.

Plant with the alfalfa in mind. Planting dates should be optimal for alfalfa stand establishment and not adjusted to favor the companion crop. If a two-pass planting system is employed, plant the oats first followed by the alfalfa. Oats can be drill-seeded or broadcast and incorporated with a harrow or disk. Immediately afterwards, the alfalfa can be drill or broadcast planted.

The standard planting depth for oats (0.5 to 1 inch) is deeper than alfalfa (less than 0.5 inch). Drill-seeding alfalfa perpendicular to oats can minimize competition within rows. Most seeding charts on drills do not have a calibration for the very low seeding rates required for companion crops, so an on-farm calibration to determine a custom drill setting may be necessary. When oat and alfalfa are planted with different seed boxes in the same pass, use the optimal seeding depth for alfalfa.

Fertilize for alfalfa. Take a soil test and apply fertilizer to the level of potassium and phosphorus required for alfalfa. Do not apply nitrogen to an alfalfa-small grain companion seeding. Nitrogen application enhances the growth and competitiveness of small grains and may reduce the alfalfa stand.

Consider early termination with an herbicide. When the companion crop is needed as an aid to alfalfa establishment but not desired at harvest, an herbicide can be applied to remove the small grain while it is young and before it competes with the alfalfa. Grass-only herbicides such as Poast (sethoxydim) and Select (clethodim) are labeled to control small grains in conventional alfalfa, while glyphosate-based herbicides can be used if the crop is glyphosate-resistant (Roundup Ready).

Recent research in Utah has found significant reductions in yield can occur if the companion crop is allowed to grow taller than 12 inches before termination. Herbicide applications at later stages will also reduce the quality of the forage due to brownish-yellow oat plant corpses in the hay.

Time harvest based on alfalfa growth and maturity. Take the first cutting according to the maturity of the alfalfa, not the companion crop. If excessive competition between the companion crop and alfalfa is evident, harvest can occur early to allow more light to reach the developing alfalfa plants. Lodging of the small grain companion crop can smother alfalfa seedlings and can be minimized with management practices such as low seeding rates, no nitrogen fertilizer, and short cultivars. If lodging occurs, cut and remove the crop as soon as possible to protect the young alfalfa stand.

The primary objective of seeding alfalfa, regardless of whether a companion crop is used, is to establish a dense, vigorous, and long-lived alfalfa stand. The short-term benefits of companion crops should not come at the expense of the long-term potential of the alfalfa. Excessive plant competition, and resulting loss of alfalfa productivity, can be avoided by managing fields to favor alfalfa growth rather than the companion crop.

This article appeared in the March 2021 issue of Hay & Forage Grower on page 10.