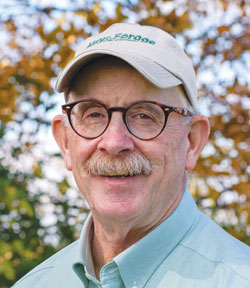 Mike Rankin
There are lots of reasons for doing things the way we do them — time savings, research proven, effectiveness, preference, cost, and yes, even tradition.

There’s an old story about the new bride who was fixing a meal for her husband. On the menu was ham. Her husband noticed that his wife was cutting off both ends of the ham before putting it into the baking pan.

“Why do you cut off both ends of the ham?” he asked inquisitively.

“Because that’s how my mother taught me,” she replied.

Not satisfied with the answer, the next time the husband saw his mother-in-law, he asked her why she cut off both ends of a ham before cooking it. She told him that her mother had always done it that way.

To get to the bottom of this culinary oddity, the husband called his wife’s elderly grandmother.

“Granny, why did you cut off the ends of a ham before cooking it?” he queried.

She chuckled and said, “For most of my married life, I didn’t have a pan long enough to hold an entire ham, so I cut off both ends.”

Granny had a good reason for dissecting hams, but the next two generations did not.

It’s unlikely that too many farmers currently make hay or graze cattle the way their grandparents did. But the ham story should make us think about why we do certain tasks the way we do.

As a young extension agent, my peers told me in no uncertain terms that my job was to help farmers adopt research-proven practices. It was a noble and rewarding mission. Over the years, I learned not to lead by telling farmers how to do a certain practice based on research, but to first ask a simple question: “Why are you doing it this way?”

Sometimes, I got a good, defendable answer. I never stopped bringing university research to the farm, but I also never could be critical of an operator who did it differently (for good reason) and was still profitable."

These days, as an agronomist turned journalist, that question of “Why are you doing it this way?” still serves me well and leads me to the crux of many farm stories. It’s also a question we need to constantly ask of ourselves regarding the way we make hay and graze livestock.

Not every farm operation has the same goals or markets, and it’s often that end game that drives decisions, or at least it should be. My farm visits over the past few months have once again reminded me of this.

One farm owner stated right up front, “Everything we do here is done with the thought that the next generation can be involved and successful.” He and his wife had four grown children who wanted to stay on the farm.

So, in addition to the base dairy enterprise, the farm has thoughtfully developed a custom forage harvesting business, a custom manure pumping business, and a sand and gravel sales enterprise. Each of the siblings oversees a component of the operation, and all farm decisions have their future at the forefront.

I also recently visited a couple of large hay farms that sell a lot of their small square bale production into the horse market. Selling into the horse market is far different than selling into the dairy market. The latter values a glimpse at the forage quality test results, while such a document is as foreign as a Russian Cossack to the average horse enthusiast. They much prefer to focus on visual hay qualities such as color and leaf retention.

Haymakers for both markets should assess nearly every production decision with the end market in mind, and those final decisions may run counter to the other depending on their customer base.

Good decisions are the bedrock for success and profitability. They need to be thoughtful and with purpose toward a defined end goal. The next time I stop by and ask, “Why do you do it that way?” — have a good answer. Just don’t cook your hams with the ends cut off.

This article appeared in the Aug/Sept 2021 issue of Hay & Forage Grower on page 4.