Fiber digestibility is more than a lab measure

By Randy Shaver
The author is a professor and extension dairy nutritionist in the department of dairy science at the University of Wisconsin-Madison. 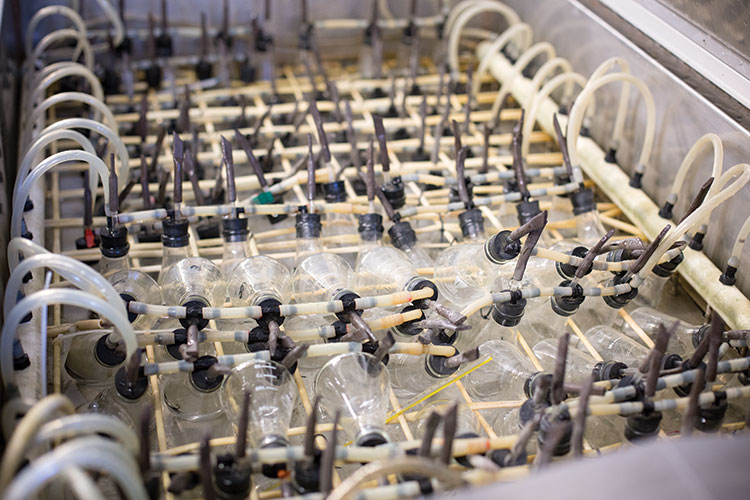 The combined effects of feed ingredients and nutrients included in dairy cow rations, diet physical form (particle size), and the cow’s level of dry matter intake (DMI) all combine to influence fiber digestibility in dairy cattle. These associative effects, however, are largely ignored within the framework of laboratory in vitro fiber digestibility assays, which include using dry, fine-ground samples, rumen fluid collected from a few donor cows fed one type of diet at one level of DMI, glass fermentation vessels, and so forth.

Therefore, for the most part, these lab digestibility tests should be viewed as relative index values for comparison among feedstuffs or over time within feedstuffs to conduct ration performance diagnostics and/or fine-tune feeding programs. They are less useful as predictors of actual fiber digestibility in the cow. The purpose of this article is to review and discuss some of the important associative effects that influence fiber digestibility in dairy cattle.

Research with lactating dairy cows was performed using USDA (Beltsville, Md.) energy chambers and noted no statistically significant differences in net energy of lactation (NEL) concentrations between a TMR with BMR corn silage compared to a TMR with a near-isogenic nonBMR corn silage. However, both DMI and milk yield were greater for the cows fed BMR corn silage.

It is evident that the milk yield response to greater ivNDFD in corn silage derives primarily through greater DMI. Presumably similar relationships among lignin, ivNDFD, DMI, fiber digestibility in the cow, and diet energy content will be observed for reduced-lignin alfalfa compared to conventional alfalfa when fed to high-producing dairy cows.

From a meta-regression of published trials, University of Wisconsin researchers reported that higher dietary starch concentration reduced ruminal and total-tract NDF digestibility in the cow. The digestibility of dietary NDF declined about 0.50 percentage units in the total digestive tract for each 1 percentage unit boost in dietary starch content.

Reduced fiber digestibility may be partially explained by lower rumen pH as a consequence of greater amounts of starch being digested in the rumen with higher starch intake. Low rumen pH is known to affect microbial growth and bacterial adherence and thereby fiber digestion. Also, the inherently high fiber digestibility of nonforage fibrous by-products used to partially replace corn grain in reduced-starch diets may be partly responsible.

This topic becomes very important as higher corn silage diets are fed because corn silage is inherently low in potassium and thus cation-anion difference. Potassium and sodium-based buffers are added to diets fed to lactating cows to boost DCAD, depending on feedstuff analysis and diet formulation to a specific DCAD content. This practice has significant effects on digestibility and lactation performance in dairy cows.

Fat is a nonfactor

Based mainly on in vitro experiments or trials in sheep, it has been a commonly held opinion that supplemental fat feeding to enhance dietary energy content depresses fiber digestibility in the cow. University of Wisconsin researchers, however, recently refuted this dogma using a meta-regression of published trials with digestibility data from lactating dairy cows fed a variety of supplemental fat sources, including vegetable oils, animal-vegetable blends and tallow, and various rumen-inert fats.

Only coconut oil, which we do not feed, was found to reduce total-tract NDF digestibility in the cow, and it was actually improved for cows fed the calcium salts of palm oil fatty acids. Intake of DM was reduced only for cows fed coconut oil or calcium salts of palm and other oil fatty acids. Rumen protection of supplemental long-chain unsaturated fatty acids may be necessary to avoid milkfat depression, but this appears to be unrelated to any reduction in fiber digestibility.

Penn State University researchers suggested that feeding low-protein diets reduced NDF digestibility in lactating dairy cows and assumed that most of this reduction occurred in the rumen. Effects on rumen microbial protein synthesis, however, were inconsistent. From their work, it was concluded that diets with less than 10 percent rumen degradable protein (DM basis) reduced fiber digestibility.

All of these fiber and physical form parameters considered together, along with feeding management on the farm, are important for maintaining or improving intake, nutrient digestibility, and lactation performance in dairy cows.

Biological assays, such as laboratory ivNDFD measurements, provide valuable decision-making information. Along with NDF content, they tell us a lot about forage quality. Nutritional models are useful for formulating and evaluating dairy cattle diets; however, numerous associative effects of feed ingredients, physical form, DMI, and feeding management practices ultimately determine fiber digestibility in the cow and the cow’s lactation performance.