Outside the box alfalfa establishment It was nearly 10 years ago when I attended an agronomy field day in Arlington, Wis., and heard John Grabber speak about some initial research he was doing that entailed establishing alfalfa under silage corn.

I sat on the tour wagon hearing him describe how he planted corn and then immediately came back and seeded alfalfa between the planted corn rows. My initial thought: This will never get farther than the research farm. I then reminded myself that you can’t prove something won’t work unless you try it.

Grabber is a USDA-ARS research scientist with the Dairy Forage Research Center based in Madison. Methodically, he and Mark Renz, an extension weed scientist with the University of Wisconsin-Madison, have investigated and tackled the challenges of this unique alfalfa establishment system. There were and still are many questions to be answered. Here are a few:

1. What impact will the alfalfa have on corn silage yields?

2. Will the alfalfa establish and provide productive plants in the year after seeding?

3. Will weeds and other pests be an issue?

4. How will weather conditions (dry or wet) impact the success of this system?

5. How will alfalfa production in subsequent years after establishment be impacted?

“We see this system as a way to bypass the low-yielding establishment year,” Grabber said. “If we can interseed alfalfa into corn to jumpstart full production of the alfalfa during the following year, that would be advantageous to growers.”

Grabber also suggested that interseeded alfalfa would serve as a cover crop to reduce soil and nutrient loss from cropland during and following the establishment year with corn. His research has clearly verified these advantages.

Findings to date suggest that there are several strategies that will vastly improve the success of this establishment method.

“Early on, it became readily apparent that the alfalfa needs to be seeded right after corn planting, or at least before emergence,” Grabber said. “We’ve also found adequate seeding rates are important. Comparing 8 versus 16 pounds per acre seeding rates, the higher rate resulted in plant densities that were 32 to 50 percent better than the lower rate following corn harvest,” he added.

One initial unanticipated decision for corn-alfalfa dual establishment was variety selection. After getting some variable results with the system, Grabber decided to test different alfalfa varieties.

“We tested 38 different alfalfa varieties in 2015 and 2016 and found substantial and consistent differences in plant survival under corn,” Grabber said. “Some of the conventional varieties had at least a fourfold greater survival rate under corn than the poorest performing varieties. There is currently ongoing research to evaluate if we can breed varieties that are better adapted to this system.”

A final key practice that Grabber’s research has found to be beneficial is the use of a growth retardant known as prohexadione. Applied about five weeks after seeding, prohexadione stunts but doesn’t kill the alfalfa, and because of its effectiveness and low toxicity, efforts are now being made to register the growth regulator for use on alfalfa interseeded into corn. The hope is that it will be available for the 2020 growing season.

Grabber has also found that prohexadione can be applied with a fungicide and insecticide to further improve alfalfa health and significantly boost stand counts (see graph). 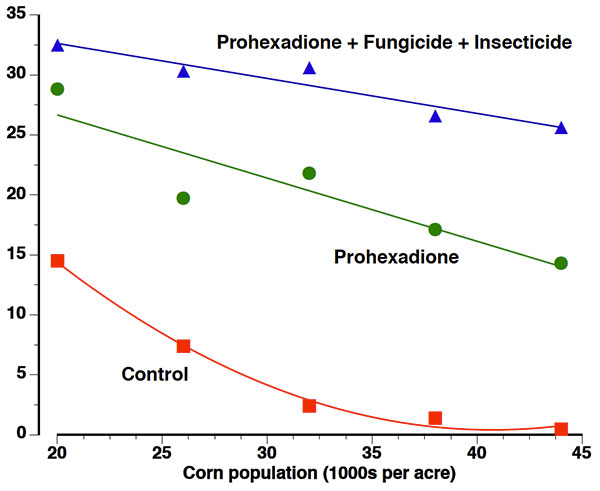 In most years, Grabber has obtained alfalfa yields of 5 to 6 tons of dry matter in the year following seeding with corn. This is nearly double the yield of a traditional seeding-year stand without a small grain companion crop.

In his studies to date, Grabber indicated that corn silage yields were sometimes reduced by up to 15 percent when grown with alfalfa.

“We have found that nitrogen fertilization is important and needs to be kept on the high end of what is recommended,” Grabber noted. “By doing so, the yield penalty can be minimized. In some years, we get equal corn silage yields whether alfalfa is interseeded or not. We’re still working on finding corn hybrids that best fit this system,” he added.

Even when grown with the interseeded alfalfa, Grabber has consistently achieved corn silage yields in the range of 25 to 30 tons per acre in his research plots. As is always the case, yields have varied with weather conditions during a particular year.

Needless to say, there are risks associated with interseeding alfalfa with corn. Drought years can be challenging when both crops are competing for available soil moisture.

Despite the risks, researchers and some farmers are resolute in their efforts to make this alfalfa establishment system workable. Studies have been implemented in a number of states and some farmers are trying the system on their own without the use of prohexadione. To read about one such Minnesota producer who has had early success, click here.