The New York state agricultural plastics recycling program is one of the best in the nation. Even so, there’s still plenty of room for more involvement by farmers and agencies.

Billions of pounds of plastic are used in world agriculture, an estimated 1 billion pounds in the U.S. alone. More is being used to cover and preserve forage each year. Very little of it is recycled. Most agricultural plastic is landfilled, buried on-farm or often burned. Much of it could be recycled, and localities need to make a decision to pursue better disposal options for the farm community.

Bale wrap, silage bags and bunker silo covers are considered essential to storing and preserving high-quality forages. Not many years ago, rotting bales of dry hay were all too common and bunker silos often had a foot or more of spoiled feed on top, reducing both feed quality and quantity. Now the landscape is often dotted with round bale “marshmallows” and silage bag “sausages.” The vast majority of bunker silos are now covered.

In New York, it was estimated that over half of the used agricultural plastics were burned prior to 2009 when the state passed tougher regulations regarding open burning. Burning plastics at low temperatures creates toxic dioxins and small particulates that lodge in the lungs. Soils and crops are contaminated both on site and downwind. Open burning has been reduced considerably, but is still too common. The New York State Department of Environmental Conservation (NYS DEC) has issued fines; however, we find that most farmers want to dispose of their used plastics properly when better disposal options are available. Most states, but not all, ban open burning of plastics.

Simply putting agricultural plastics in the trash is often difficult. A couple of bale wraps per day is one thing, but disposing of large quantities becomes expensive and, in the case of bunker covers, can be difficult to physically get in a dumpster. Often the dumpster is filled by volume, not by weight.

Trash haulers are not enthusiastic about film plastics either. They don’t pack well in the trucks and make for inefficient hauling. It is a daily event to have these plastics tangle up in the running gear inside the compaction trucks. This often requires staff to climb into the truck to cut the material out, a dangerous and unpleasant job. 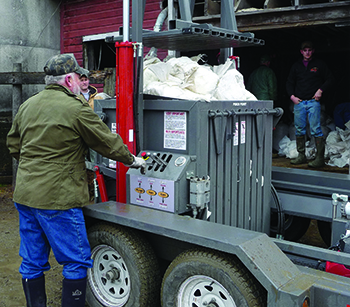 A mobile baler is used to compress plastic for shipping.
Recycling of agricultural plastics has been a long time coming in New York and it has a long way to go. The Recycling Agricultural Plastics Program (RAPP) at Cornell University began more than a decade ago. At first, funding came from a variety of sources — the NY Farm Viability Institute, US EPA Region 2, USDA Rural Development and Cornell Cooperative Extension. The big step forward occurred after the 2009 “burn ban” when NYS DEC significantly funded RAPP through the N.Y. Environmental Protection Fund. RAPP is part of the Cornell Waste Management Institute.

RAPP obtained six mobile BigFoot BF300 plastics balers, now made by Kennco Manufacturing. These were designed to go on-farm. RAPP partnered with county Soil and Water Conservation Districts to coordinate the baling efforts. Local partnerships have been essential. Typically, it’s Cornell Cooperative Extension staff that do the outreach and education. Education on best management practices for collecting and saving agricultural plastics is considered essential. We recommend a farm visit so that a plan can be developed that is realistic and feasible for the farm owner. Most farmers are surprised to find that saving plastic for recycling isn’t difficult.

Initially, RAPP operated largely outside of county and township Solid Waste and Recycling (SWR) as there were limited markets for the material collected. SWR is often only set up to handle household single-stream recycling. They may like the idea of diverting agricultural plastic, but it usually requires special collections on limited budgets. Yet SWR collection is starting to happen in N.Y. Madison and Delaware County Solid Waste Departments collect agricultural plastics for recycling. Other counties are considering collection.

Recyclers have responded. Where there is a resource, entrepreneurs tend to take an interest. Delta Plastics in Arkansas and Bridon Cordage’s Gopher Plastics in Minnesota have take-back programs from producers. Delta Plastics manufactures polytube irrigation and trash bags, while Gopher Plastics makes Revolver baling twine from recycled twine. In New York, most of the film plastics are shipped to a trash bag manufacturer in Brooklyn. Typically, recyclers are paying the cost of trucking; sometimes there is a modest reimbursement for baling. Each region of the U.S. has its own set of potential recyclers and it takes some market exploration.

In the last five years, approximately 3 million pounds of used agricultural plastics have been recycled in New York, currently reaching a 10 percent recycling rate —nowhere near where we want to be, but it’s a start. In Wyoming County, N.Y., over 40 percent of the used plastics from dairy farms are being recycled. This is a great success and yet it isn’t sustainable on grant funding.

Solid waste and recycling authorities are often supportive of recycling but reluctant to get involved with agricultural plastics. “It’s no secret that we are a farming community,” comments Doug Thompson of G&T Farms in Richfield Springs, N.Y., “It (recycling of agricultural plastics) needs to be integrated with solid waste and recycling.” Doug operates a large beef farm that uses wrapped round bales. “It’s important; more people need to do it. I like being part of the process.”

Generating interest within the farming community is important. Support from Farm Bureau and other agricultural organizations is essential. Local recycling is almost always oriented to residential and business recycling. The farm community sometimes needs to remind local representatives and agencies that they are a significant constituency. 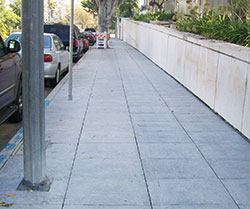 This sidewalk at the Los Angeles Music Center is made from recycled bale wrap plastic.

The problem is not unique to forage production. Horticultural farms use mulch films, potting media bags, drip irrigation tube, various greenhouse covers, and pots and trays. Pesticide containers are unique in that much of the U.S. is covered by Ag Container Recycling Council (ACRC) contractors. This is an industry effort to recycle pesticide containers, keeping them out of the normal waste and recycling streams.

Agricultural plastics recycling is a real challenge that needs to be addressed.

This article appeared in the November 2015 issue of Hay & Forage Grower on pages 10 and 11.

Silage bags remain popular as a storage option Next